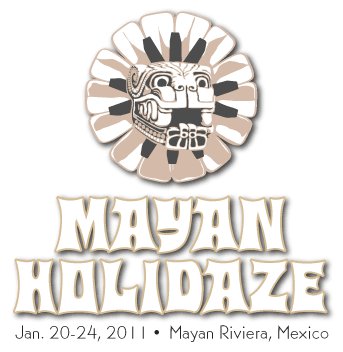 Mayan Holidaze – Day 3: “Is This Not The Coolest Thing Y’all Have Ever Done?”
-David Murphy

Something about the third day of Mayan Holidaze just made it feel like “the day.” With all the Holidaze artists lined up in the lobby for autograph signings, a “Fiesta Mexicana” theme that included a guacamole making competition judged by Umphrey’s McGee’s lead guitarist Jake Cinniger, a tequila tasting (more of a tequila showcase with little tasting involved) with David Murphy, and arguably the most anticipated schedule of artists of the event, the whole resort from the guests, to the organizers, bartenders, security guards, and maintenance people were positively buzzing.

During the afternoon, the pool and beach area were filled with dudes in flat brims and scantily clad women playfully grooving in the water, laying in the covered waterfront mattress huts, or enjoying some Mexican treats at the on-site buffet while David Murphy spun a seventies funk and classic R&B infused poolside DJ set.

But one of the most unique and refreshing aspects of the day was the fine dining included in the event package. While I might have snacked on trail mix sitting in a lawn chair while waiting for the headlining performances at any other festival, I was instead treated to five-star cuisine at Now Sapphire’s premium French restaurant Paramour, feasting on a goat cheese salad and grilled salmon while I prepared for Sound Tribe’s last official sets before Murph’s medical hiatus.

And when Tribe took the stage for their first set, they came out swinging, opening with “Oil in the Water,” before soaring into fan favorites “Rent,” “Be Nice,” “Aimlessly,” and closing with an old school, much appreciated, and super funky “Wika Chikana.”

And though the bar was set high, Tribe came out for set two with tremendous energy as keyboardist David Phipps lead the group into a soulful, classy “Breathe In” opener. And though the band absolutely killed it with tunes like “Moonsocket,” “Shock Doctrine” and “Grizzly,” it was the band’s stage presence that really elevated the performance to another level. Zach Velmer went absolutely apeshit behind the drum kit, crushing his cymbals with every new blast and periodically shooting up from his throne to rile the crowd while Murph strutted all over the stage, joyfully bobbing his head and continuously scanning the audience with a huge smile on his face as his adoring fans exhausted their legs until the 9 finished with a most appropriate “Dance” encore.

Bonobo then retook the stage for another interlude set before the much-anticipated late night Bisco show. And after another brief introduction from Annabel Lukins, the Biscuits slowly glided into a soothing “The Very Moon” that just felt so right standing in the warm ocean water under a glowing orange moon just peeking out from behind the clouds. “Very Moon’s” funk section then drifted into a bouncy “Spraypaint” before soaring into “Helicopters” and finishing the set with a “And The Ladies Were The Rest of the Night” tease that hopped right into a sing-along-y “I-Man” before closing with the end of “Spraypaint.”

The second set started with a proper “Ladies” before moving into “We Like To Party” and a very fitting inverted “Above the Waves,” first raging the peak before softly and patiently jamming on the beginning and middle sections of the song. They were taking their time. And so were we.

And though the set finished with a crushing “Ladies” ending that rolled right back into “I-Man” before Brownstein announced the definitive return of Bisco Inferno (this year with special guests Snoop Doggy Dog and Rusko,) there was no denying that it was Tribe’s night.

And exiting the show to a packed lobby bar with the artists and their families mingling with the fans as Orchard Lounge rocked the late night lounge, the energy from four ridiculous back to back to back to back shows had all the Holidazers simply bubbling. And knowing we had just one more day in paradise before saying farewell, there was nothing else to do but stay up and watch the most picturesque of sunrises over the seemingly infinitely expansive blue ocean water.

Mayan Holidaze – Day 4: “Thank You For Being Part of Our Dream.”
-Cloud 9 Adventures

The afternoon of the final day on January 23rd felt a little different at the Now Sapphire. Maybe it was that it was cool and overcast, maybe it was that all the guests realized they’d need to return to reality the following day, or maybe just because everyone was getting worn out from endless dancing and infinite bar access, but the normally bustling poolside was far more chilled out as Emancipator played the final poolside gazebo set.

Nonetheless, it was still a Sunday and the bar lounge was alive with football fervor as artists and guests alike sported an array of Bears, Packers, Steelers, and Jets jerseys, while the Sapphire’s amazing staff made us feel at home with trays of wings and pitchers of cervesa…just another one of those fantastic moments where you were able to casually interact with the artists who were cheering with like-minded fans during a scoring drive or consoling one another after a tough loss (my condolences to Bayliss’s Bears and Brownstein’s Jets).

And after eating yet another exquisite meal, this time at the resort’s excellent hibachi spot “Lemongrass,” me and my crew of some of the most fuckin’ legit kids I’ve ever met from Albany, NY raised our glasses one more time to the good times we’d shared and to one more night of raging on that magnificent sand.

The final night of music began with Tribe’s last set for the next touring period, entering the stage as Axe the Cables for just the fifth time ever with Murph and guitarist Hunter Brown both seated, Velmer and percussionist Jeffree Lerner on smaller, more basic setups, and Phipps on a baby grand piano. It blew me away.  The group illustrated amazing musical versatility with a set list that was smooth and jazzy at all the right moments with the perfect amount of kick for easy head nodding, mixing in jams like “Equinox,” “King Pharaoh’s Tomb,” and “Lo Swaga” with a silky ending to “Moonsocket.” And though Murph was meant to hit the late night with a “Murphy Brown” DJ set, he just didn’t feel up to it, leaving us with that last special set to hold us over until his recovery.  Both his musical talent and charisma will be sorely missed during his recovery.

Continuing with the unique feel of the final evening, Eliga La Musica, an Umphrey’s McGee all-request set that surveyed songs the fans wanted to hear and how they wanted to hear them, followed. And while I sometimes tire of Umphrey’s heavy, borderline metal jams, Eliga had real pop to it, with bassist Ryan Stasik dropping seriously funky slap bass bombs and Cinniger keeping the energy high with excellent harmonics and without playing a billion notes in his solos, especially during the “Pay the Snucka,” dedicated to Stasik whose Steelers clinched a Super Bowl spot earlier that day.

Then taking it home with one last dance party, The Disco Biscuits under the guise of their lyric-less alter ego Tractorbeam got up on stage for one last get down highlighted by “Aquatic Ape,” a dirty inverted “Great Abyss,” a dubbed “Mindless Dribble,” and a mucho caliente ending to “Svengahli.”

And as I left the sand for the final time, it truly felt like I was in some sort of beautiful alternate reality. I recalled when I first arrived that the Mayan Holidaze informational packet promised the event would be “etched in our souls forever,” and as I packed up my things I knew truer words had never been written. It was just the kind of place where strangers became friends and friends became family, and I won’t soon forget the music, the food, and most importantly the people. So thank you Mayan Holidaze for allowing me to have one of the most bueno weekends of my life and for making my dreams possible …adios amigos…uno mas al año que viene, por favor!

InfinitiRock (Chester Anand) has just begun his ascent. This young, but impressive producer out of…