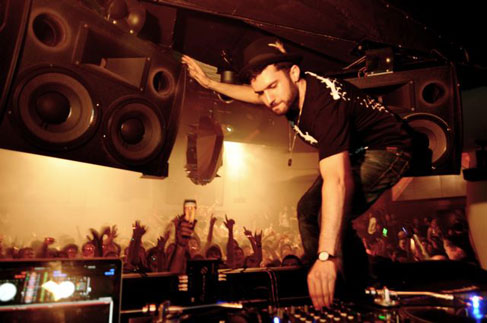 Scion presents the Magic 8-Ball Tour featuring A-Trak with Kid Sister and The Gaslamp Killer in just two short weeks. This is a perfect start  to the summer.

A-Trak was the first DJ to take home all three competition titles (DMC, ITF, Vestax) and the first to win five World Championships. He won the DMCs World DJ Championship at the mere age of 15, making him the youngest person to ever win this competition. When A-Trak performs live, his main concern is the audience; making sure they dance and flow in sync with his roaring beats of disco, house, funk, and occasional rap. His magnetic scratch techniques and turntable skills will inevitably be thrown into the mix of his set. A-Trak will make two appearances at Coachella (one as Ducksauce) before hitting the road with his crew.

Performing alongside A-Trak will be Melisa Young (a.k.a. Kid Sister) whom A-Trak produces and signed to his label, Fool’s Gold, in 2008. Kid Sister draws inspiration from the music of her youth. She blends electro-pop, hip-hop, ghetto house, and Chicago house into one cohesive sound and performs it with deep soul.

Also on the line-up is The Gaslamp Killer, an LA based DJ who releases his mixes off of Flying Lotus’s label, Brainfeeder. His sound is unique and has ample range. From Indian instruments, jazz horn lines, symphonic string melodies, light percussion to dubstep, heavy basslines, and controlled static, he does it all.

May 12- Commodore Ballroom: Vancouver, BC

Miami resident Afro Monk has been busy, to say the least, forming a self-sustaining empire on all…