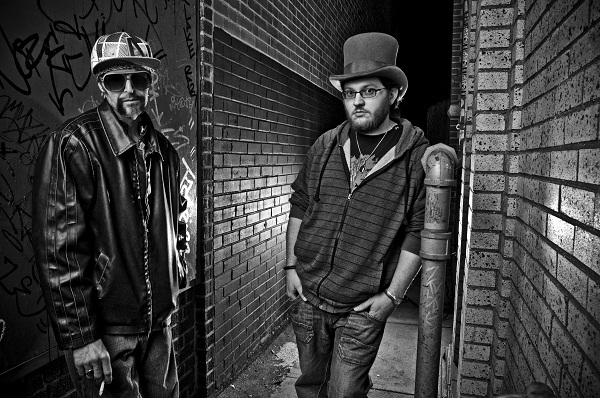 Moving out to San Francisco from Alabama brought along a ton of changes in scenery, so it was great to see that a few familiar faces were playing in town. BoomBox, originally from Muscle Shoals, Alabama, stopped by San Francisco’s Temple Nightclub last Friday alongside Bay Area favorite, ill-esha, and LA’s up-and-coming, Chris B. I had grown accustomed to catching BoomBox in Tuscaloosa or Birmingham, as the duo is generous with tour dates in their home state, so seeing them perform in my new home city was something special. BoomBox’s appeal has quickly spread both across the country as well as around the world – they just returned from a stint in New Zealand! Frequent festival staples, they have built a solid and loyal fanbase, never failing to bring their signature energy to their shows.

Here, Russ and Zion take turns talking about their creative process, their music’s impact on their fans, and how their Southern roots embedded an appreciation for the history surrounding their passion.

Kate Zaliznock of Lost in Sound: Having spent five years in Alabama as a transplant, how would you say the area affected your sound? Did your main inspirations come from your surroundings, or were they drawn from a rebellion against the scene?

Zion (Strings and Vocals): In Muscle Shoals, Alabama, you get a sense of the roots of rock ‘n’ roll. You can feel the blues emanating from the ground. You can taste the soul in the air. You can hear the funk skip across the river.

The quiet South taught me a new way of looking at rhythm.

Big cities can be distracting. Maybe its because the eyes are so busy looking around at the flood of never ending stimulus, that the ear forgets to listen. A big city can be like two cymbals crashing – where sound is bouncing all over the place. The ear doesn’t localize to one thing. But the eyes are always moving around.

The silent South gave me a chance in understanding where our musical heritage comes from.

LiS: What would you name as your most creative endeavor? In what ways do you see your creative process as distinct from other artists?

Zion: I’d say hammering out the BoomBox philosophy has been our most creative endeavor. We attempt to stream the music of the past through the BoomBox filter. The sound we get from this process is our summation of American music.

LiS: Some artists’ best work is simply stumbled upon through a serious of random events – do you have any particular songs which were the result of such a process? Does your best music come about through a focused practice, or does it appear randomly and spontaneously?

While searching for new music to play, a good DJ might listen to 100 records. But out of those 100 records, he or she might only gleam one song worthy of adding to their repertoire. And the same goes for us – only we are constantly weeding through random ideas to extract the one gem with real potential.

LiS: What is the best or most inspirational interaction you’ve had with a fan?

Russ (Keys & Production): So these songs are all accidents in a sense. We don’t set out to paint a table covered in rose petals. But when we look at the final picture and that’s what we see…then that’s what we call it. And if we find beauty in the picture, we show it to you.

We’ve heard some pretty amazing stories and witnessed some unbelievable changes take place in people. A close friend of ours truly feels that our music helped his mother through her battle with cancer. A few friends have made it out the other end of the addiction thing, claiming the music helped them through. Talked with a girl a while back who just started “living life” in her words, claiming that we were some sort of gateway drug for her in her escape from mainstream America. Every time we cross paths with someone with a story like that, it is a truly memorable moment.

I don’t know how much we really had to do with these situations, other than providing a soundtrack for a change already taking place in that person’s life. I would like to think that people sense our desire to create something, a song or live experience, that just makes a person feel good. Some times that’s all a person needs.

LiS: When would you designate as the first moment you realized you wanted to make a career out of your musical talents? Was it a lifelong goal or did it present itself later?

Russ: I think that both of us have always known that this was our path in life, even before we realized that rock ‘n’ roll could pay the bills.  We both grew up in musical families with instruments around all the time, with family jams and what not.

We both started out as drummers before moving to melodic instrumentation. I had taken a turn to audio production and was working making records for other people and mixing their sound on the road when Z and I met up in 2002. I had pretty much given up the idea of playing music myself, but even then couldn’t get away from the hold that this business has on me. No business like it.

LiS: Do you have any particularly empowering fellow artists who provide you with a major source of inspiration? Have you worked with anyone in particular who you feel has left an imprint on your sound?

Russ: I really feel alone in the industry today. I’m always on the lookout for contemporaries, but end up feeling that BoomBox is just an odd duck.  When we first got started Zion’s mom, Donna, and her husband, David, were a huge help to the band and me personally. They would give us advice, helpful musical suggestions, the occasional meal, and use of the gas card, all while maintaining their careers and musical endeavors. I am forever grateful. Particle was also a huge help back in the day. They really opened the door for us to play shows in front of real crowds. Dark Star Orchestra did the same thing. Both of these bands kind of showed us the ropes – influenced us as people and as a band.

LiS: If you could become any animal, alive or extinct, which would it be and why?

Russ: Okay. So at first I thought this was kind of silly, but then I really thought about it. I came to the conclusion that my dog pretty much has one of the best lives in the animal kingdom. I prefer the human race. But if I ever have to do time as an animal, I’m probably gonna stand in the Pitbull line and take my chances lounging in front of a fireplace or chasing a squirrel.

Stay up with Boombox

The Nadis Warriors recently released a track off their new album, set to drop on…