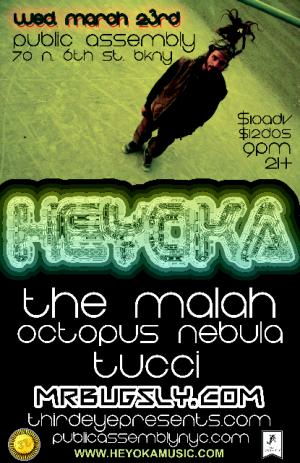 Mr. Bugsly is at it yet again, and this time they’re teaming up with Third Eye Presents to bring you one helluva Wednesday night. Tomorrow, March 23, 2011, at Public Assembly is going to be one you do not want to miss! One of the best line-ups I have seen in years, I would essentially pay $10 to see any one of these acts play a show by themselves. Make sure you arrive on time [if not early], to ensure you catch all three of these perennial players and let Tucci bring the vibe up to a dance party we will be sure never to forget.

With The Malah‘s return to Brooklyn, this brings long standing anticipation to rest for many fans. It will also broaden their audience to new people who have grown into the scene since the band was here last, for LostinSound’s Valentines Day Weekend Extravaganza. (They were supposed to return for a Rocks Off Cruise at the end of Summer ’10, but unfortunately that was canceled last minute). As Brandon, Seth, and Eli are amidst recording a new album, and with a recent move to Colorado, these guys are definitely not going to hesitate to bring the funk an’ house down.

As I hear the word being spread around about this show, one name that seems to go unmentioned is the talented Octopus Nebula. Colorado natives, this band has been around since 2004 but with its most recent lineup (since 2008) they’ve been making heavy strides towards stardom within the jam community. These guys know how to perform, and are extremely on point when it comes to covers and playing a live show. Along the lines of a darker Lotus and Papadosio, this 4-piece have been known to cover Ott and Shpongle medleys throughout their live set (…ohhh if we could be so lucky!!). They bring a new style to the community with “music that blends elements of electronic, ambient, downtempo, breakbeat, rock, acid jazz, and ethereal grooves.” For what I believe is their first time in NYC, lets show these guys how this city rocks it, and I’m sure they will reciprocate! 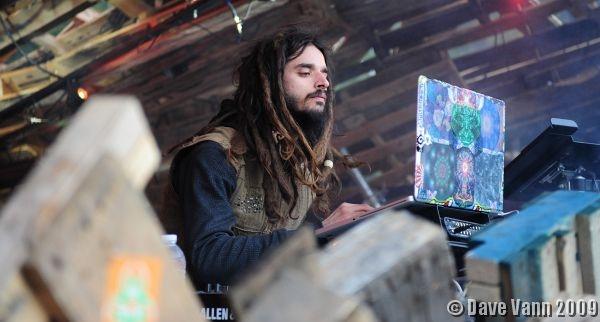 Heyoka, well Heyoka is Heyoka. I felt the need to write his name 3 times in one sentence based around the fact that his name sums up everything you need to know about this wobble master. (The word Heyókȟa refers to the Lakota concept of a contrarian, jester, satirist or sacred clown). A Burning Man/NorCal resident, Andrei Olenev is a unique, exciting, and game changing producer who lets your imagination and auditory senses do most of the work once his tunes blast through your speakers. I love his crescendos and decrescendos, buildups, and constant sounds moving in and out of the song structure. His drum beats give it sort of a hip hop feel- who knows, a live drummer could bring his music to literally a whole ‘nother level, like nothing out there before him. Already, he is heading in that direction with his most recent release, “Mandelbass” (read LiS’ review).

Keep your eye out for an interview with The Malah as well as complete show coverage, full of stream of conscious experience and intriguing media! See You There!!

The Brain Trust is Proud to Present: Brothers Past featuring Auto Orbit  at The…