While self-described “sonic sorcerer” Frank Heiss has been producing electronic music under various monikers for a couple decades now, Ascensio(N) is his second album as HEISS. In this most recent endeavor, he continues to narrate the spiritual journey he began to describe in 2012’s Awake(N). A lifelong musician, Heiss’ diverse range of musical influences can be clearly heard throughout Ascensio(N), and while there is an underlying musical and lyrical feeling holding the entire collection together, each track is stylistically unique. Heiss weaves through styles, hinting at a wide variety of genres, from jazz fusion to drum n’ bass to reggae, and everything in between. As with Awake(N), it is apparent through his lyrics that Heiss has a message that he wants to get across from the very beginning. In the introductory track, “Mind the Void,” he repeats a simple four-line refrain in which he tells the listener:

“Mind the Void, neither run nor attain,

Freedom from need is when we let love reign,

Master of desire; hold out for fire,

Living to learn, therein without the burn.”

Positive and conscious lyrics are interspersed throughout the album, some written and sung by Heiss himself, and others by special guests, including emcees Jackson Whalan (Technicolor Lenses) and Soham the Athenian, Indian-American singer Falu, and multi-instrumental renaissance man Michael Garfield. While Ascensio(N) is solid throughout, with strong production and composition, these cameos add to the diversity of sound and provide some of the album’s most memorable moments. In “Mystical Revival,” Soham displays his lyrical gifts and spiritual wisdom, with lines such as, “We can’t pretend we’re in control once we remember what we know.” Heiss provides a skankin’, steady instrumental along with a vocal hook in which he layers his own voice to create a classic-rock style four-part harmony. On “Brahman,” Jackson Whalan gives us a basic lesson in one of the fundamental concepts of Hinduism, celebrating the realization of unity between self and the divine (“When creation turns to permanence/like an eternal song/with no will to label what is right and wrong”). “Bardo,” featuring Falu, one of the more up-tempo tracks on the album, is a desi-influenced drum n’ bass number reminiscent of Tabla Beat Science or Talvin Singh’s solo efforts. The final track, “The Good, The True, & The Beautiful,” features Michael Garfield’s unique electro-acoustic looping style and hauntingly beautiful vocals by Cathryn Chapman, providing a soothing outro from this eclectic collection.

Overall, Ascensio(N) is a unique, yet highly accessible album with a positive message. You can download it for yourself HERE. 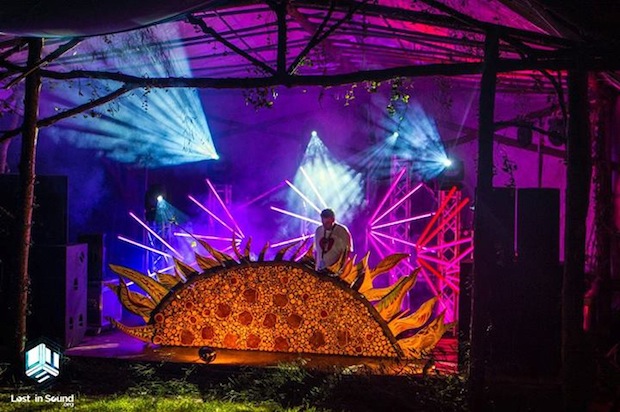 We recently spoke with Heiss about his musical background, his production process, his views on life, and his upcoming projects…

[LiS]  When and how did you first get into playing music?

[Frank Heiss] My parents tell me I was four years old and went to see one of my father’s works performed. A percussionist with The Boston Symphony named Frank Epstein was playing. I woke up the next day and built my own drum sticks out of tinker toys and started hitting pots and pans. The rest is history. Pretty cool that I was a DIY four year old.

What influenced you to start producing electronic music?

Hip Hop. Period. The prequel to that was listening to old school hardcore from the UK from a DJ named Nicky Black Market courtesy of my friend Colin. When I heard beats by DJ Premier and Pete Rock after those from the Bomb Squad and The Dust Brothers work on Paul’s Boutique, I decided to sell my drum set and buy an MPC-3000. This is after 20 years of drumming. I just bailed on the whole band thing. Also working with people started to annoy me. They’re so unreliable. My successful college band just fizzled and we had fans, management interest and had opened for Phish. I somehow thought reliance on machines might help. Still not sure if I was right. (laughs)

What are your major musical influences?

Well, Keyboards Magazine in Germany quoted me in 1996, and I think it still holds up. I said something like: “when I was 19 years old, my three greatest heroes were Miles Davis, Jerry Garcia, and Frank Zappa – five years later they were all dead” (Miles on September 28, 1991, Zappa on December 4, 1993, and Jerry on August 9, 1995). I would add Premier and Pete Rock in there as well as some off beat composers like Charles Ives, who I read was Jerry’s favorite, and in general a great deal of classical music, having been brought up that way. I was, like, weaned on King Crimson and super into The Mahavishnu Orchestra. Yes, and early Funkadelic. I was also way into Tangerine Dream and Jean Michele Jarre’s Zoolook album at a very early age. That probably explains something.

I see beyond genre. I guess my Dad is probably one of my biggest influences but not in a traditional way – more like the only way I was gonna “one-up” him would be to understand Bartok and Mahler but also dig the hell out of The B-52’s. I must have been in grade school when Planet Claire came out and new wave was really big.

I wanted to play the walkie talkie in a band when I grew up.

And I dunno if he’s a musical influence per say, but I really like Gramatik actually – that dude has got it going on. Hearing “Fist Up” made me want to make new stuff in a way that I had not felt since I heard T-Power’s remix of DJ Soul Slinger’s “Abducted,” which is what inspired me to make drum n’ bass as tube back in the 1990’s. I also try to find value in stuff I don’t like. Sometimes I turn on top-40 radio and am amazed at what I am unafraid to admit I actually enjoy. Rihanna’s “Stay,” written by Mikky Ekko, for example. A truly great song. Oh, yeah – and I am an out of the closet metal head sometimes. Slowly We Rot by Obituary is an amazing record as well as anything by Carcass. And I wouldn’t want to leave out Mozart. He also had it going on.

Where do you get your inspiration?

I used to think I had something to do with it, then I read The Artist’s Way by Julia Cameron and now realize I am just a channel. I control the quantity in how much time I put in to it, but I do my best to let go of any fear surrounding the quality of my work and just tune in while letting The Force flow through me. Sounds a bit crazy, and yeah, it is.

Sketches become something or not. I usually don’t think much when I start a track. I may have titles worked out ahead of time even lyrics but connecting the dots comes later. Those youthful days of “I am going to make this epic shit right now” are done, I just show up and get to work on a regular schedule. I think it was Chuck Close who said “inspiration is for amateurs, the rest of us just show up and get to work…” I really dig that.

There’s no such thing as writers block if you’re the real deal.

I am reading Tunesmith by Jimmy Webb right now and finding confirmation of many things I already knew instinctively, which is very helpful.

Do you go into the studio with specific ideas, or does it happen more spontaneously?

Both. I take loads of notes on iOS when listening to my own mixes or even just for ideas and then that syncs with my Macbook and boom when I am in the studio – there’s all the musical thoughts I had for the last day or whatever.

What tools do you use in your production process?

Sadly these days exclusively software. Maybe someday I will start collecting hardware again, but I doubt it. Ableton Live, Native Instruments Komplete, Waves Bundles, and tons of plugins… The Fab Filter stuff is gold, I have that Arturia Collection and the Korg one as well and the Ohm Boys stuff is just silly good.

How do you feel about the state of the World right now?

It is just as fucked as it was when I was born, but now I know why. More and more every day. The rabbit hole is deep. Fortunately, I believe there is some kind of Divine Force at work running the show or else my life would be bad, because my own opinion of humanity is pretty low, especially that of myself after all the mistakes I have made. (laughs) Clearly, I struggle with Self Love and Forgiveness. I am often my own harshest critic.

What do you feel is your greatest personal achievement?

When I finally get off the cigarettes – that will be it.

Is there any advice you have for up-and-coming musicians and producers, or for young people in general?

Your first release was called Awake(N), and this one is called Ascension(N). What’s the significance of the (N)?

Well I got heavily into [computer] programming so it’s a reference to that, pun intended. You can be Awake, Conscious, Present, and have Faith and all that but with any work, you’re dead in the water, so the (N) represents a variable being passed to a function called ‘Awake’ or in the case of this album the root ‘Ascension.’ I used to be a half-empty kind of guy, very dualistic, but these days I just contribute what I’ve got the best I can, put it in the glass and all of the sudden the half empty vs. half full question is just a bunch of bullshit – it’s a glass of water for fucksake. If I do nothing then the water will evaporate, and if I put some water in then it won’t. Worrying about how much is actually there is obsessive compulsive disorder! (laughs) It boils down to always doing my best which is one of the Toltec Four Agreements outlined by Don Miguel Ruiz in his epic work of the same name.

The Mastery of Love was a really great read as well.

Who are your favorite new artists right now?

Many of them are friends or acquaintances actually and I am pretty stoked on that:

What is next for Heiss?

A continuing metamorphosis. I have plans to bring back an older project briefly and mostly I am going to focus on singles for a while to develop my craft further before doing another full-length album. I tend to create what I think the world needs to hear, instead of what people actually want, which I’ve realized is artistically selfish and ego driven. Who am I to say, “you should like this because…?” At best, that’s preaching.

I was given a musical gift, so why would I use it only to please myself?

I do not see this as conforming, but rather making more people genuinely happy, in addition to myself. I am about to take myself a lot less seriously and get out of my own way. 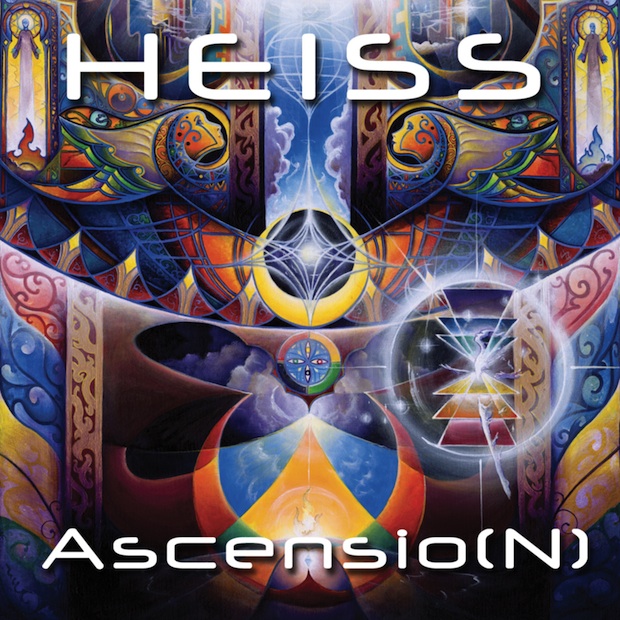 Gnome Fire is one of many monikers worn by semi-nomadic multimedia mystic Patrick DiGiovanni.