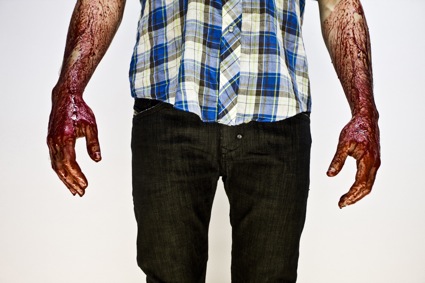 The mysterious Fake Blood is Theo Keating, also known as DJ Touché. He is a British DJ and producer who made his name as one half of The Wiseguys and The Black Ghosts. He’s not one for publicity, and very little is known about him. He’s been making quite a name for himself as an in-demand remix artist, but his own productions are also top notch. Style of Eye and Fort Knox Five are just a few of the big names to put their own edits on Fake Blood‘s unique club anthems. Everything he touches is recognizable by his unique style, and all his remixes are personalized by his signature vocals. The words “Fake Blood” are created by chopping up the ORIGINAL acapella, and assembling the words with individual vowel and consonant sounds. No new vocals are used, only the same ones heard in the original song.

FROM FAKE BLOOD MYSPACE:
“Hello there…

On Friday, the 13th March, my ESSENTIAL MIX was broadcast on BBC Radio 1.

The theme was this: Rather than just bang it out for 2 hours (yawn) I thought I would split it into 2 distinct halves, and show a wider range of music I love. Plus it makes it more interesting to put together, and to listen to hopefully:

The 1st hour represents THE CLUB, and is the kind of stuff I am playing out. A bit heavier for that apex of the night.
But the 2nd hour is THE AFTER PARTY, and is me playing other stuff I love, but goes a bit deeper, stripped back, melodic and unusual. Music to watch the night turn into morning.

It’ll definitely throw a few people, but that was kind of the intention.”

Mayan Holidaze: Day 1 – “The Happiest Place on Earth” There’s something undeniably magical about…