Electronic music producers want to be ahead of their time. That is the reason why the laptop/controller phenomenon happened. Yet some of us maintain the stunted growth of teenagers. This one time at band camp the collective producers that were Cologne Germany’s electronic underground set out to do battle royal… with almost no electricity. Yes, you read that correctly. We thought that “real” producers would be too “civilized” to compete using primarily batteries, and when it came to production we were straight gangster.

How gangster is gangster? Exhibit the following two facts:

Now, the phrase “battery operated devices” may conjure imagery of something rather lewd, that is if you’re a sexually aware being. But I digress…

In the spirit of carrying a Roland TB-303 and a Roland TR-606 into the woods with a bunch of C size batteries to jam out, we did what we knew best – threw a party… outside by the river in Cologne, Germany. We invited a couple thousand of our closest friends, and when the police showed up to say it was too loud across the river, they helped us turn the speakers around. No joke. The European scene was not like here in America. There were ten minute sets, and the only thing that was allowed to use electricity was your mixer. If things like this existed back then, then we were drinking way too much Reissdorf Koeslch (see image on the left) to be conscious of them. Don’t panic, there were (and still are) several devices out there that could (and still can) rise to this challenge. The first that I will focus on in this Confessions of a Hardware Junkie installment is a not-so-silent killer. 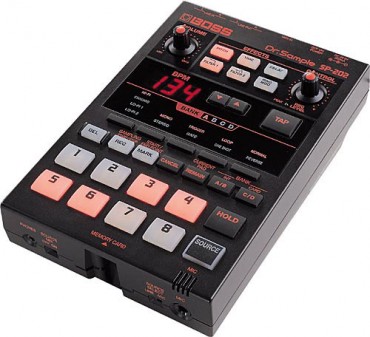 The phrase sampler craze of the late 1990’s was a wonderful time to be a producer hardware junkie. The Boss SP-202 was one of the more popular… and a vocal sample powerhouse among other niceties. Here’s the rundown:

A most important fact: this is the only battery operated hardware sampler that I know of where it’s possible to manipulate the start and end point of a sample while playback is looping, as well as the direction of playback. For your reference, the Boss SP-202 Manual is still available for download, but the device is no longer in production. This kind of thing is child’s play today, but it was definitely not back in the day. The sonic effect yielded via this type of manipulation, especially with vocal samples, is startling. Try Ableton’s “slice to new track” function for a glimpse of it. Also of note, although not battery operated, is another sampler that allows real time manipulation of start and end point values via built in sliders – the Akai S-612. I learned about this machine from Sebastian Niessen of S-N-D, if you want bleeding edge hardware, look no further than http://s-n-d.com. An example of what the BOSS SP-202 sounds like while being heavily leveraged, is a track that I co-produced as The Dank, called “I Need Your Love.” 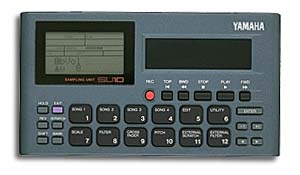 This Yamaha SU-10 write home feature was the ribbon controller, now common place in the QuNeo and elsewhere, that could be used to control a variety of settings whilst tweaking to your heart’s content. When I was performing live with this device, I chose it to hold primarily ambient texture sounds, which could be filtered and such using the ribbon controller. Also of note in this same series is the Yamaha QY-10 and that review was written by Craig Anderton who spent plenty of time with us in Cologne. Being able to make music on an airplane was not always as easy as it is today, #SadFace portability and battery operated power were not commonplace. A similar and equally powerful device that is worthy of mention but requires electricity is the Alesis MMT-8, although I will not discuss it further because I never managed to own one. The MMT-8 was one of several that got away.

The Zoom SampleTrak ST-224 uses electricity. (Remember I said “mostly” battery operated devices!) I’ve still got one of these in storage and for a while there, I was rocking two simultaneously because the looping functionality is exceptional for what was available at the time. 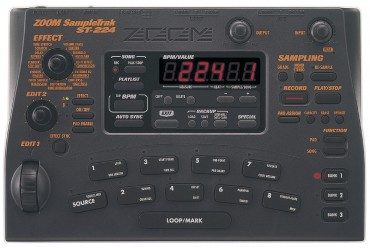 Anyone who had a hardware sampler and knows what it was like to turn a knob while setting start points and end points and placing sounds into key groups to map them onto the MIDI keyboard will appreciate that this device allowed you to set the sample length in BPM! For those that never endured this, I will state that once upon a time, you had to actually record audio into your devices using cables – not everything was an audio file awaiting producer manipulation.

It’s possible to just set this thing to say… 128 BPM, hit start using an adjustable transient threshold, and the sample length will be perfect – no messing with a calculator to figure out how many ‘samples’ at a given rate would yield the perfect loop at a specified BPM (yes, we used to do that. With. The. Calculators.), and for bonus points the effects are solid. When performing I usually chose this for bass and synth loops because the modulation wheel on the left could be mapped to filter, pitch-shift and other great ZOOM effects, providing a lot of user options – which are what the live electronic producer needs to maintain the attention of an audience. Getting naked or wearing a mask doesn’t always do the trick. 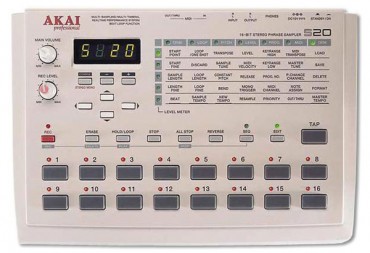 The Akai S-20 uses electricity as well, sadly, although I took some ghetto pride in loading my 17MB worth of sounds from the on board 3.5 inch HD floppy disc drive. I once used this machine as my primary beat loop playback. It was my drummer so-to-speak. Note: the Akai S20 internal sequencer is not to be trusted, it… sucks. One performance draw back is having to push the “hold” button to keep a beat looping, but that was relatively minor at the time considering I could fit my entire live PA rig in a large briefcase. Another strange thing is that the stereo output is RCA, so I had to carry a “music triage kit” with various adapters and a headlamp to see what the heck was happening while on stage. Good times.

It wouldn’t be fair to speak of battery operated electronic music production tools and not mention the epic, so I have saved it for last. This little number needs no introduction because of the way it sounds. What does need introduction, and the reason why I adore it, is the way it is programmed – which has yet to be duplicated, and how to do so is oral tradition among producers. Trust me, you’re not going to make any sense from the broken english translations in the original manual. Yes, the interface is great, and the knobs seem to be set to the perfect levels of each parameter, especially the filter cutoff and resonance. Once it’s playing you can tweak acid to hearts content, but how do you get a slamming pattern to play back? I was fortunate enough to be taught how to program a TB-303 by an early German Acid techno master named Dr. Walker from the duo of electronic pioneers known as Air Liquide. He showed me while we created this 10″ vinyl release, which is based on a true story.

First off, the TB-303 does not have MIDI even though it claims the elite “Computer Controlled” status. It has something called DIN Sync, and you need one of these to make it slave to your sequencer. Once that is in place, it will start, stop and playback with your primary sequencer – mine at the time was an Akai MPC-3000. The next step is to enter the pitches in the order you wish them to be played back. This is where the phenomenal aspects of the Roland Bassline start to manifest. What you program here is completely divorced from the rhythm and by starting the machine in write mode (not play mode) you can then tap in the rhythm that you want applied to the pitches you entered earlier. Did you get that? The rhythm of your bass line can be programmed independently from the order in which the pitches are played back. #Pimp. So then while keeping the device in “write mode” which would better be named “performance mode” – it is possible to reprogram the sucker on the fly while it’s running. If you need a different tuning well there is a knob for that. Warning: mute the channel on your mixer before changing the rhythm because the super loud click/beep is highly audible.

There are also transpose, accent and slide settings for each step. The slide setting being another primordial factor which sets this baby apart from the rest. Wisdom from my experience shows that: the less thought that you put into which setting is applied to which step, the better. If you are a true composer and know exactly what you want to be played, then this device is not for you. The Roland Computer Controlled Baseline TB-303 is for composer producers who are ready to embrace the enigma of order and chaos, surfing the realm between control and letting go, allowing the Divine ghost in the machine to be an active participant in your creations. That’s all for now, folks.

Youthful non believers can find actual proof that I once performed with such cave man devices by reading the article I wrote for EQ Magazine back in 1999.