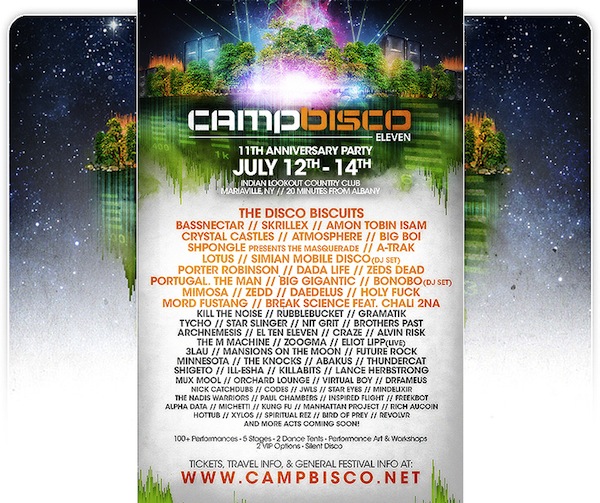 Nobody Beats The Drum

It’s safe to say that Nobody Beats the Drum is the most exciting act in the electronic music industry.  Its not very often you see a 3 man group; and even less often is one of the 3 controlling visuals on a breathtaking 9 meter wide screen.  Jori (DJ), Sjam (DJ), and Rogier (VJ), have been longtime friends all hailing from The Netherlands.  Their unique approach to making music and performing live has given them massive praise in the states.  With an already successful festival run, with highlights such as Wakarusa and Electric Forest, Nobody Beats the Drum have been turning heads left and right.  I was able to hang out and interview these friendly Dutch masterminds at Ultra Music Festival and pick their brains as to what makes them so unique.  Jori exaplained it best when he said “We just try to build up this like massive music robot and the live show is all about taming the beast.”  The electro upbeat rage is intensified by the relentless energy they share onstage.  This is an act not to be missed – you will be leaving the tent with only one thing to say… Holy SHIT!

Both halves of Archnemesis have a long history in making music and performing live.  Curt Heiny (formerly of Telepath) and Justin Aubuchon (MO Theory) combined forces to great the musical brainchild, Archnemesis.  Its only been about 3 years now, but since its conception Archnemesis has been touring the country and destroying dance floors with no remorse.  Some would compare their electro-soul sound to that of Pretty Lights.  Soulful melodies drift across intricate rhythms and party rocking bass lines.  Curt and Justin’s love for music is evident in their live performance which makes them a perfect fit with STS9’s label 1320 Records. Theres nothing better then hearing some great feel-good music and being able to tell the producers really love what they do.  After my first archnemesis show Curt hopped off stage and just stood in the front row to watch the next act and give daps to his fans.  They are great people, great producers, and deserve every bit of praise and respect they’ve received.  Don’t miss their set and look out for big things to come from Archnemesis.

The Lost in Sound family has come to a general consensus that dubstep has fallen onto the bottom of the electronic music totem pole.  Don’t get us wrong, our love for bass music is peaking higher then ever.  There are plenty of reasons to justify this argument – it’s been Americanized, mainstreamed, etc. – we’re going to save that conversation for a different time and place.  REGARDLESS, it’s acts like Dillon Francis that gives us faith in dubstep.  The LA native is awing his peers time and time again with ground breaking bass infused tunes.  He is best known for his moombahton beats, his bizarre personality, and his love for using social media (especially cats on the internet).  Don’t be surprised if he takes his pants off during a live set or takes a shot at yo momma.  We love him the most cause he doesn’t give a fuck… or a shit.

Jake Stanczak, aka Kill the Noise, seems to be everywhere we look in the dubstep scene.  Collaborating with tons of artists like Datsik, Skrillex, Dillon Francis and beyond, as well as co-producing for Korn’s new album, KTN shows no signs of slowing down.  He even appeared on Jimmy Kimmel Live to throw down with Korn.  He’s released music through OWSLA, which is the home of Zedd and Porter Robinson; as well as the notorious Mau5trap label. A lot of people say all dubstep sounds the same and it’s hard to distinguish artists.  I think this may be true to some extent, but for some reason anything Kill the Noise touches can be spotted with ease and stands out from the rest.  His versatility is shown through his other stage name Ewun in which hes collaborated with the likes of Chase & Status and Dieselboy.  Wether he performs as Ewun or Kill the Noise, it’s certain he will bring the heat and send crowds into a bass fueled frenzy.

No matter what the occasion, state, venue, etc., Starkey always seems to headline whatever bill he’s on.  That says a lot for someone that’s flew under the radar for so many years.  He’s toured the world plenty of times and has been making quality bass music since 2008, yet he only has 12,000 likes on facebook. Whether it’s street bass, hip-hop remixes, or drum n’ bass, Starkey has proved himself as a top level shogun in the industry.  Having never seen him live, I couldn’t be more excited for his appearance this weekend at Camp Bisco XI.  The guy has done it all – He has received high praise from some of the biggest names around, produced music for each and every subgenre, and has somehow done all this without receiving the fame and glory that usually ruins the careers of most producers.  He’s almost like the magical unicorn – you know it exists and you know it’s amazing, but you never got to see it.  Consider yourself lucky, you’ll get to see him on Friday night.

When first introduced to Amon through his drum’n’bass production, I never would’ve thought he would’ve escalated towards the direction he took ISAM. Working with artists ranging from the avant-garde Kronos Quartet to dnb legends Noisia, Amon has solidified his own sound outside of any genre. His album “Adventures in Foam” gave him the break he needed to escalate in the music industry, signing to heavily reputable record label Ninja Tune in 1996. Amon Tobin’s ‘ISAM’ album, to say the least, is far from his earlier works but amazing nonetheless. The visual live stage setup is of such high caliber, it has defied standards in the industry. It’s easy for me to say Amon is the main reason I am going to camp this year and can’t wait to catch his set, as it was amazing at the Brooklyn Masonic Temple last October in New York.

Christian Bauhofer’s goal in music production is very simple; release diverse productions that will win over any crowd. His heavy hitting bass and frantic energy have brought him all over the country. He’s worked alongside artists Big Gigantic; PANTyRAiD and Bassnectar have put his tracks into their sets. The latest mix I downloaded off his soundcloud “Astral Projection ” show’s that Minnesota’s style can range from hip hop to dubstep and change at any given moment. Bauhofer will destroy the Camp Bisco stage I have no doubts!

Ill-esha has been an influence in the North American Electronic Scene for over a decade. Starting as a Vocalist, she’s transitionined into an MC and DJ. Producing in styles ranging from glitch hop to downtempo and dubstep, she has shared the stage with heavyweights in the scene such as Dieselboy, VibeSquaD, and Tipper, to name a few. Traveling all over the world to display her unique live show, Ill-esha is an artist not to miss at Camp Cisco if you’re looking to listen to the latest west coast bangers in the industry.

Hot Sugar is another marvelous artist coming to Camp Bisco this year from the Ninja Tune label. Nick Koenig disguises sounds you would not hear everyday and manipulates them into musical compositions that enter our ears so gracefully. He labels his production as ‘Associative Music.’ Hot Sugar’s influences range from Ivan Pavlov to Birdman, showing his taste expands across a wide range of talent. his latest EP labeled “Muscle Milk” was sent to me by a friend and I’m truly impressed at how this kid puts together his work. Don’t forget to check him out in the Ninja Tune tent on Friday.

Last but certainly not least is Torin Goodnight aka Bird of Prey. A San Francisco native who’s developed his own unique sound that has had him traveling all over the country this year. He likes to create music that is engaging and articulate, masculine but not macho, feminine but not fluffy. Bird of Prey is all about finding his own middle ground between his aggressive and peaceful nature. His music is heavy bass driven, not sticking to one genre, but fusing anything and everything he’s able to do well. Ranging from genres such as psystep to tropical fusion, he’s been a huge influence on the music I listen to, which gives my ears ever lasting peace. I look forward to what he has to bring to Camp Bisco, as I know many will fall in love with his music after his set is over. 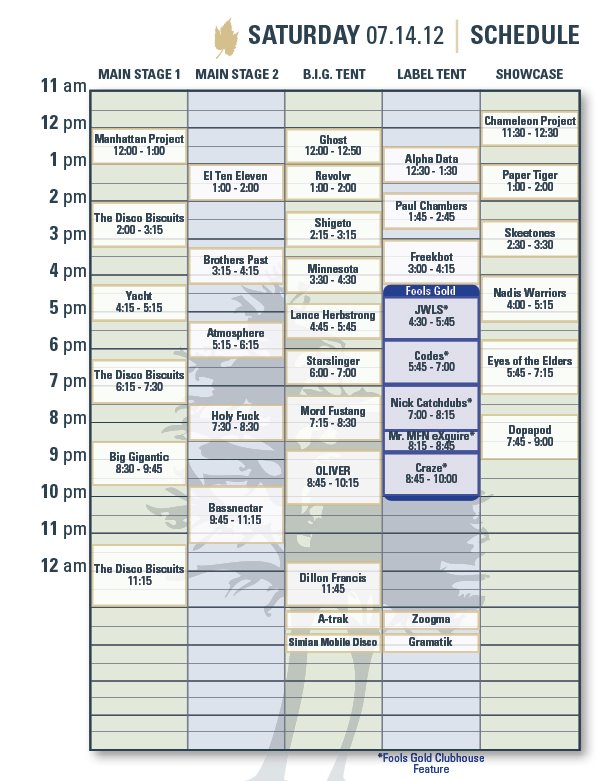