There is a certain essence in the air when you walk into a Mr. Bugsly event at the Brooklyn Bowl lately. Yes, it might be the delicate wafts of blue ribbon fried chicken, or possibly even a fresh blackened catfish sandwich if you’re lucky enough to be eating next to me, but for anyone who was at Big Gigantic and Sonic Spank’s show on December 11th there was also the pleasure of experiencing a sold out crowd and enough nasty beats to turn even the most impotent of men into expecting fathers.

Although Sonic Spank was not slated to start until 11:00, people were showing up at 6:00 to ensure they wouldn’t be denied entry to what promised to be an incredible night. What more can you expect when you combine the area’s sickest venue with top notch up-and-coming talent? Nothing less than what was served up.

Sonic Spank already had an enormous crowd amassing before they even began, and it only grew in size and intensity throughout their set. Starting with “Bang it Out,” they were immediately at it in what has become a sight to witness as Ian McGuire and Benjamin Karp busted out their provocative, yet essential, signature dance moves while Scotty Zwang held down the anchor from his drum throne.

Spank truly had the audience’s collective ass in the palm of their hands for this show, and although Karp’s computer crashed as the crowd was going hysterical for “Ass Buffet,” they continued on with a twenty-minute improvisation, which was, in my opinion, the highlight of their set. In a world where man and machine have intertwined to create the movement we’re seeing now, it’s a relief to see a band that can deal with technical difficulties so seamlessly and pull it off as if nothing ever happened (in fact, if Zwang had not told me about the crash, I wouldn’t even have known.) This reinforces the fact that Sonic Spank is comprised of much more than computer virtuosos, but that they are really true players at their core. They left the stage with smiles on their faces, and the crowd obviously enjoyed being harshly disciplined by the entertaining up-and-comers. 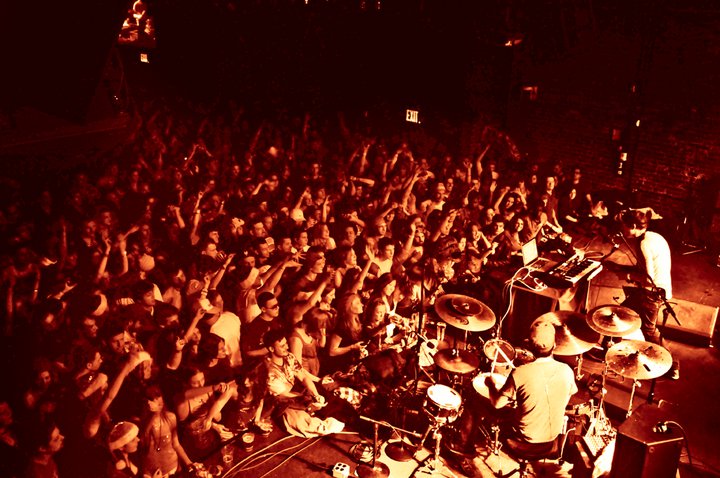 Big Gigantic has been growing bigger and more gigantic since the moment of their inception thanks to Dominic Lalli’s sensual chops, Jeremy Salken’s powerhouse drumming, and some nice production/DJ work to compliment. Fresh off of their latest release A Place Behind the Moon (which was mastered by friend and fellow beat master Alex Botwin), the excitement for this set could have cut even the most stale of cheese wheels. What ensued was a straight up massacre on the dance floor, as the two murderously moved through their set with a consistent rise in energy, and with no hesitation whatsoever.

Along with their original compositions, Big G busted out four must hear remixes: Chiddy Bang’s “Opposite of Adults,” Ludacris’ “Fantasy,” Aloe Blacc’s “I Need a Dolla,” and the highlight of the night, Whiz Khalifa’s “Black and Yellow.” As if that wasn’t enough, they brought Adam Deitch (of Pretty Lights/Soulive/Break Science/Lettuce fame) to sit in on a ridiculous cut of “Solitude.”

Every minute of the set was executed with the professionalism, creativity, and energy that we have come to know and love from Big Gigantic. This was honestly the best show I have seen of theirs, and it was a killer way to close out the tour. Sonic Spank and Big Gigantic’s music complimented each other’s perfectly and both bands left the crowd and floor wet with various fluids. I believe the only people who left the Brooklyn Bowl unhappy that night must have been the janitors.

Big Gigantic sets sail for Jam Cruise 9 on January 4th, and Sonic Spank will be playing with Lotus at The Electric Factory on January 1st, as well as one of the much anticipated afterparties for the Disco Biscuits Terminal 5 Run with Brothers Past. You can check out the info here.

Cities are cultural hubs, with thousands of people participating and contributing to music, the arts,…