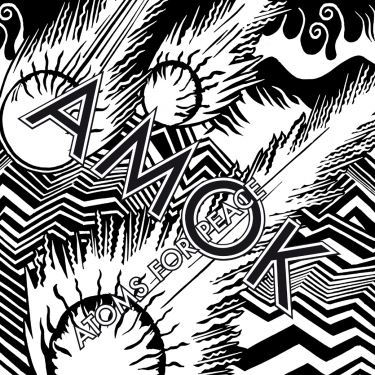 What was once the touring band of Thom Yorke‘s solo synthesizer project, Atoms for Peace is now a musical Megazord comprised of wizard producer Nigel Godrich, Red Hot Chili Peppers bassist Flea, David Byrne, percussionist Mauro Refosco, Beck drummer Joey Waronker, and the grey ranger himself, Yorke. The group’s debut album Amok (nine tracks at 44:35) takes from producers of old such as Squarepusher and Auchture as well as members of the new guard such as Burial and Flying Lotus, somehow managing to bring control and beauty to seemingly manic and spastic rhythms and sounds. Music for the mad scientist who moonlights as a monk. There are points on Amok when its hard to differentiate the sound from Radiohead‘s King of Limbs and In Rainbows releases, but overall this ensemble makes use of rhythms and sounds that would prove to be too ‘electronic’ for Radiohead. Very ready for the remix. Check out the footage of Yorke and Godrich playing a DJ set last week at London’s Oval Space.

Just as The Talking Head‘s style embraced the free but fucked spirit of the 1980’s “Greed is Good” period, Atoms for Peace is a social representation of the decade’s “The System is Fucked” mentality: the energy crisis, industry and financial systems, global warming. I imagine Yorke writing this album’s lyrics while reading Occupy pamphlets and participating in a Google Hangout with Michael Moore and Noam Chomsky. “The reason I wanted to call the band (Atoms for Peace) was this sort of naivety and underneath, all this fucking darkness. And where it’s ended up and what it’s become,” Yorke said in an interview in Japan. “Atoms for Peace, it expresses a weird kinetic energy and this sort of serenity as well.” Too often people overlook what an artist is doing to write our lives into history; this is what the brilliant mind of Yorke has always succeeded in doing, and this record is no exception.

What I find most impressive about Atoms for Peace is that it is essentially over-the-hill musicians producing new songs and jamming like they still can’t grow beards. Bob Dylan said, “An artist must be careful to never think he has arrived somewhere, he must always be in a constant state of becoming.” Thom Yorke, Godrich, and the rest have shown no signs of entropy in their musicianship, and I’m sure they will take that revolutionary spirit to their graves.

Flea has embraced the opportunity to work outside of his rock roots and explore an entirely different universe with Atoms for Peace. I recall seeing him play with the band at Boston’s Wang Theatre, shirtless with a teal mohawk of course. He owned the stage and his bass per usual but was able to focus his attention on the music being played, versus the needs of a raucous rock crowd. Instead of regurgitating “Under the Bridge” for the thousandth time, Flea is actively creating innovative music with this group. Watching him play was like watching someone in a state of shamanic ecstasy: a very real sight effect of an Atoms for Peace show.

“I gotta stop, the will is strong but the flesh is weak. Guess that’s it. I made my bed, I’m lying in it,” Yorke moans over mechanical twists in the track “Default.” Such an ode to complacent living and simply resigning to the default setting of life. Makes me think of so many of these hollow people walking around today, succumbing to the allure of so many vices and addictions. Let this song’s message take hold of you, and it’ll leave you shivering. I love the little dips of reverb at the end of Yorke’s statements. Epic, resounding Blade Runner synth stabs and rapid clicks and blips remind me of Aphex Twin‘s “Windowlicker.”

This album is at its best when it grooves along a lower BPM and exudes hypnosis and mental mitosis. Causing both limb spasms and Savasana simultaneously. Nigel Godrich’s familiar glimmering guitar strumming in “Stuck Together Pieces” complements Joey Waronker and Mauro Refosco’s percussive shake, rattle, and roll. The song’s lyrics call out to the deceptive evil-doers in the financial market who have collectively fucked the world by repeating the warning, “You don’t get away so easily.” The dominating, morphing synth line and the last three guitar notes of this song scare the shit out me.

“Ingenue” is production in the same vein as a track off of Sufjan Steven‘s The Age of Adz or Bon Iver‘s recent work. A warm and continuous dissonant baseline combines with some of that echo dripping that is described by some as an audio representation of fractals. “You got me into this space, you get me out,” Yorke pleads. An effortless vocal tone and sustained high notes continue to impress, as he sings words that you have to read in the lyric book to understand. I’ve always admired how well he can create sounds with his vocal cords that I don’t even care whether or not they are actual words are not. Clipped drum machine beats with reverb high hat bursts around it out with some slight madness. Definitely a revelation of a song if these musicians ever made one.

Decided to watch “this” while I streamed the title track “Amok” from the new album, as this music is made for intro-as well as outro-spection. To contemplate while moving, to tap into the always expanding. The song meanders along with a mellow breakbeat and a far off beeping. This is one of the more dancehall beats ever to be credited to Thom Yorke. Sultry circuit frying music to produce android babies to.

A lot of music writers and ultimately many listeners are already taking this opportunity to compare Atoms For Peace’s new album, Amok, to Yorke’s classic, The Eraser. Some will say the album artwork didn’t live up, others will say musically it was too this or that. I don’t get how some journalists can say that the tracks on this album would ‘pop’ more if the band were to just attack more vigorously. I know that this album causes me to move in all different directions, grit my teeth, and think deep. Experimentation ensues in each song, and you can hear the passion and precision of these musicians who are nearly immune to criticism and scrutiny. So, I advise you to play Amok alone with a decent pair of headphones and with no expectations. You won’t regret it, as Atoms for Peace reminds us of why they truly are a timeless act. 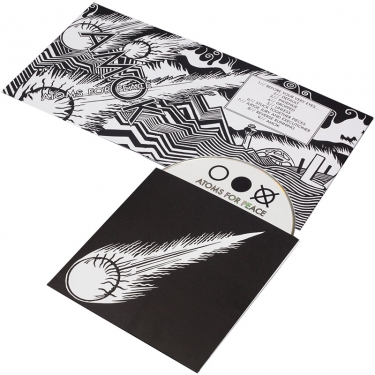 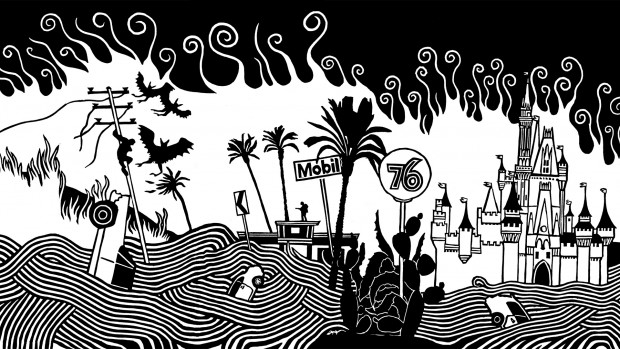