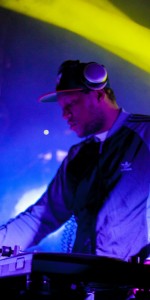 Purple bass returned to San Francisco in full effect on Thursday May 28th, when Wormhole Bay Area brought Joker to Mighty to bring the roof down. As always, Wormhole provided a stacked lineup of West Coast bass DJs to warm

us up and spin us down when Joker wasn’t gracing us with his signature percussion and grime.

The vibe was set in Mighty – between the live artists and the awesome projected visuals, there was plenty to look at when not dancing – and all of the excitement of those attending were clearly there to get down with intent. As the night kicked off, we saw performances by Trevor Kelly and Nebakaneza. Towards the end of Nebakaneza’s set, I saw Joker standing back by the bar gauging the energy of the crowd. By the time Joker was ready to hit the stage, the opening acts had made certain that the crowd was warmed up and filled with anticipation.

For those of you unfamiliar with Joker, he’s a young DJ who got found his roots in UK garage and dubstep. He got started fooling around on FruityLoops, and within a few years, he’d made a name for himself, created the Kapsize Recordings label, and forged his signature sound, Purple bass. His innumerable hit EPs and masterful mixes showcase a style both versatile and distinctly unique. I still listen to some of his older mixes and marvel at how good they are. Here are two of my favorites, in which you can hear several of the tracks I mention throughout this post:

As they say, the sky is the limit, and when the sun goes down, and the sky starts to get dark, it’s plain to see that it’s time for a bit of purple in the air. I’d thought that Joker, having come on at 12:30, would have opened with his colossal new tune, “Midnight”; he didn’t. His set was a journey through purple-space, peppered with Joker favorites old and new. He just recently released his new LP, The MainFrame, so he had a lot of big tracks to choose from. I didn’t catch my personal favorite off of the new album, “Lucy,” but he did play a great “Purple City” remix as well as his massive track, “Let it Be Known.”

I could have told you that when he dropped Trolly Snatcha‘s Newham Generals remix, the crowd would go wild, but that was nothing compared to when, at the end of his set, he played an absolutely masterful Biggie Smalls remix, aptly dubbed “BIG.” The crowd liked that one so much that he scratched back on the record and played it through twice. The look of satisfaction on his face as he saw how much the crowd loved it was one for the books. He came to play and he knew that he crushed it.

I expected a bigger crowd for such a talented DJ, but it was Wormhole Bay Area’s first show in San Francisco proper, and like I said before, the sky is the limit. These guys have been producing some amazing events in the Bay lately and deserve some love and respect. They throw the Wormhole Wednesday parties every Wednesday at The New Parish in Oakland and it’s always a good time, so next time you see Wormhole throwing down in your area make sure that you turn up.

All in all, I couldn’t have asked for a better set from Joker (though I did wish he’d played “Lucy” so I could’ve sang along). The night was a resounding success and between the DJs, the art, the Venus Tour bus, and the people who all brought the party by being the party, and after listening to Spoken Bird play his closing set for a little while, we hit the road to head back home, tinted just slightly purple.

This month, we’re getting Lost in Sound with visionary artist and permaculture enthusiast Martin Bridge….