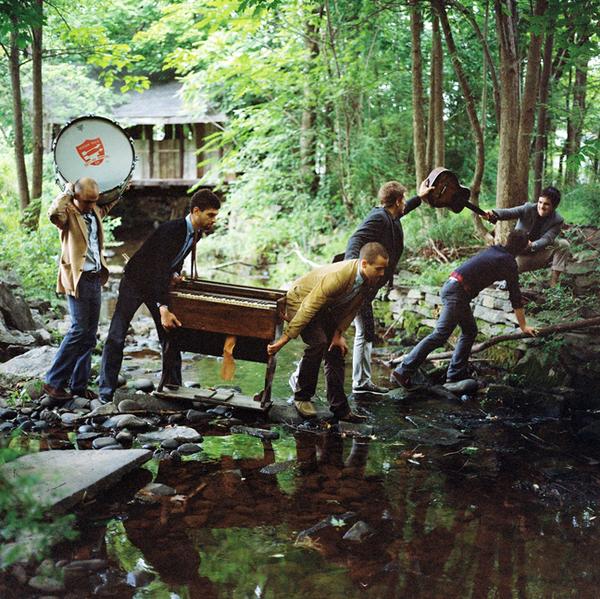 White Rabbits is a six-piece indie outfit based in Brooklyn. The band formed at the University of Missouri, where frontmen Greg Roberts and Stephen Patterson met in 2004. They play a lively, catchy brand of rock that is passionate and rhythmic, making them stand out among other upbeat bands.

Their first studio album, Fort Nightly, was released in 2007 on Say Hey Records. It was a sweeping critical success and is a personal favorite of mine because of the sharp guitar work and solid songwriting that gets stuck in your head without being poppy. They showed a dark and bitter side at times — the songs full of yearning and hunger — the formula rich, tight and concise. The band began appearing at festivals and touring in support of acts like The Kaiser Chiefs, building a fanbase of their own.

In May 2009, they released a second album, It’s Frightening. Produced by Britt Daniel of Spoon, it ranges more in tempo; from the infectious, simmering energy we came to know and love in their first release, to a more thoughtful and mature pace. It has its moments, but can’t be expected to compare with their hit-filled debut.

People put their whole lives into their first album. Its the culmination of years of ideas and aesthetics, shaped into a complex project that has existed in some form since the artists picked up their instruments. Then — amidst being on tour and suddenly having money and everything else that comes with success — they’re expected to pump the same kind of product out in six months. Hence, all of the genius first albums, followed by mediocre sophomoric efforts. There is an element of that here as our expectations inevitably filter our judgment. The album is worth checking out though, as it offers a looser, more relaxed take on the White Rabbits sound and contains some interesting and memorable moments.

Give them a listen:

Kid On My Shoulders