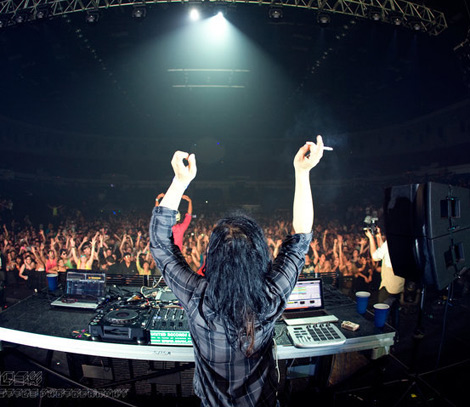 Skrillex, aka Sonny Moore, is part of a new generation of artists that refuse to be restricted by preconceived notions or outside expectations. “Genre has never been important to me,” he insists. “I’ve never thought about music that way.” He describes his current sound as “a mix of dubstep, electro and glitch all thrown together.” In the fall of 2010, he began a nationwide tour with Deadmau5 and started releasing new toons on his fresh label Mau5trap.

“Scary Monsters And Nice Sprites” has received tons of rave reviews and remix treatments. My personal favorite, done by Noisia, adds even more filthiness to an already brutal baseline.

Bonus: The most glitched out remix of La Roux ever heard

La Roux – In For The Kill (Skrillex remix)