Surrounded By Ninjas is a production duo out of Portland, OR that is one of the most interesting live electronica acts on the West Coast. The pair’s greatest strength is their diverse array of drum beats and basslines encompassing styles from breaks to drum-n-bass to smooth downtempo. The synth work is solid and rousing, but the rhythm section they put together really moves me.

Three years in the making, last summer’s Disassociation Association was their 3rd full length studio album and the inaugural release for ArtDamaged Records. Complex and danceable, the album captures the trademark sound of their live improv sets while offering a more finely tuned experience. They often sound like a live band with an amazing drummer changing tempos and dropping in organic basslines, but then shift to sequences of synthetic pulses and warped effects that could only be orchestrated with custom samples and layering software.

Producer/Keyboardist Asher Fulero and Turntablist/Art Director Joel Barber have worked together since 2002, self-releasing two albums and taking short tours, while maintaining the other artistic projects they both balance. Always intriguing and futuristic, the duo has focused on improvisation within an deep entanglement of gear, but over the years slowly phased out many of their unpredictable toys and introduced laptops running Ableton Live, making it possible to have more samples and effects going on at once and time things more accurately.

Electronic music has traveled a bumpy road since production tools first became affordable and accessible to the general public. “Ableton Artists” were met with staunch resistance by many in the musical community as amateurs and cheaters at the art of making music. Since then, these production techniques have proven capable of amazing things and evolved music, gained widespread approval, developed their own musical and stylistic identity and infiltrated just about every genre. 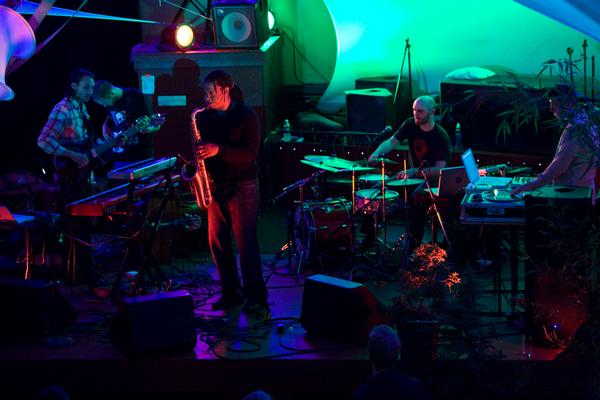 Path of the Ninja, featuring Nathan Weidenhaft and Dion Stepanski from Signal Path and Devin Phillips on Sax.

Pioneers like the Ninjas have incorporated their rich musical backgrounds with the new options available to create a refined and powerful mix. Yet there are still those out there who refuse to open up to it, perhaps because of its lack of adaptability to a performance setting – many feel it is impossible to adequately express oneself by hopping around pushing buttons. All that, however, is changing as software manufacturers and musicians innovate and push electronica forward into new realms, free of all limitation.

This team is an example of the forward-thinking philosophy that is taking us in new directions and tearing down the restrictions with technology and experimentation once so feared. Pictured above with the Path Of The Ninja live band, its clear they are always looking for new varieties of sound and performance to blast off the masses.

Combining Fulero‘s liquid beat production and keyboard wizardry with Barber‘s brilliant bin-scrounging and Post-Post-Modernist slant (which he calls ArtDamaged), the pieces on the latest album were born out of sound sketches made in the pair’s living rooms in 2006, then incubated through live performances and remixing over a 2-year production process at Fulero‘s home studio and events like High Sierra and Phoenix Festival.

The improvisation became composition, which led to more songwriting and cohesion in their creative process. No longer simply stringing catchy hooks and bumpin beats together, parts were generated and modified with a concept or vision in mind, fit carefully together to build and relax momentum and create an album that flows effortlessly through many different festival tents. Here are a few good ones – they improve upon repeated listening, new layers popping out from under the surface.

You Will Never Be The Same from Dual Processor

BUY IT NOW AT CDBABY

or purchase it at iTunes