On Saturday June 14th, Subverse-NYC is proud to present an evening of dark dubstep at The Paper Box in Brooklyn, New York. The night showcases quite possibly the weightiest lineup that the SBVRS gang have put together since the crew’s inception in 2012. This (their 10th dance) is hosted by Toast MC, one of the most recognizable voices in bass music as well as four of the most notorious purveyors, producers, and selectors of that foundation sound – Leon Switch, Sparxy, Mesck and Deafblind.

Seperately, Leon Switch and Toast MC need almost no introduction. Leon, an eminent artist at multiple tempos, arose through the DnB world just as the dubstep sound was starting to find its feet, and subsequently became one of the few producers who helped shaped the sound in its fledgling years as half of Kryptic Minds. Toast MC is renowned for his rigorous global touring schedule and long stint as Rinse FM’s go-to dubstep host on the world-famous Minimal Mondays show.

Both Leon and Toast have recently parted with previous long-term collaborators, and although Leon has joined Distance‘s legendary Chestplate imprint as one of their most recent signees (with a number of releases yet TBA), and Toast is a regular with the Uprise Audio family, the pair have formed what promises to be an extremely memorable partnership. The duo are rumored to have spent some time in the studio as of late, and with so much of Leon’s music forthcoming or under wraps, this is sure to be a deluge of exclusives.

Sparxy, a.k.a. Matt Sparks, who hails from Portsmouth UK, is a producer, DJ, and label boss of the rapidly growing Bacon Dubs – one of dubstep’s most promising rosters of artists and releases. Sparxy’s productions feel as though they draw inspiration from his DnB days, and feature a distinct gritty edge. You can find his tunes on labels like NoMad Records and Vulcan Audio, with support from N-Type, Distance and more. Make sure to grab the brand new Evolution LP from Bacon Dubs, give away free through FatKidOnFire.

Mesck is a 140 bpm bass music producer and DJ out of Los Angeles, California, who’s recent signing to the UK’s Chestplate label makes him the first stateside artist on the roster. His tracks range from tribalistic stompers to more minimal, snarly, rollers, but each and every one has a strong emphasis on sound design, atmosphere, and pressure for the sound system. Look out for his debut Chestplate release due out this June on digital and Vinyl.

Residing in Austin, Texas by way of the UK, Deafblind is an absolute force to be reckoned with when it comes to quality productions and pushing the limits of what can be done within the space of bass music and dubstep. He’s had a steady stream of huge releases on labels such as Bacon Dubs, Soulstep, Sub Pressure, and Red Shift One. Deafblind’s knowledge of the more technical aspects of production really shines through on his tracks, touting pristine synths and pads, precise percussive elements, and weighty sub lines. The man has been hard at work this year, and rumor has it he’s been putting together some bits especially for the Subverse night.

SBVRS residents Max Mischief and I.N.I will also be representing, bringing that deep dark flavor you can catch each month on their radio shows for both Dusk.FM and Rood.FM. Sound on the night will be reinforced by the mighty subBASS SoundSystem, who will be providing Danley Labhorn subs, Seaton Submersive HP subwoofers, and a four-point fill arrangement ensuring that the entire dance floor will be swimming in a full range of frequencies with an emphasis on low end. The evening will also feature visual projections curated by the Subverse crew, and an open back yard area. Capacity for the event is limited, so make sure to grab presale tickets while you’re able. 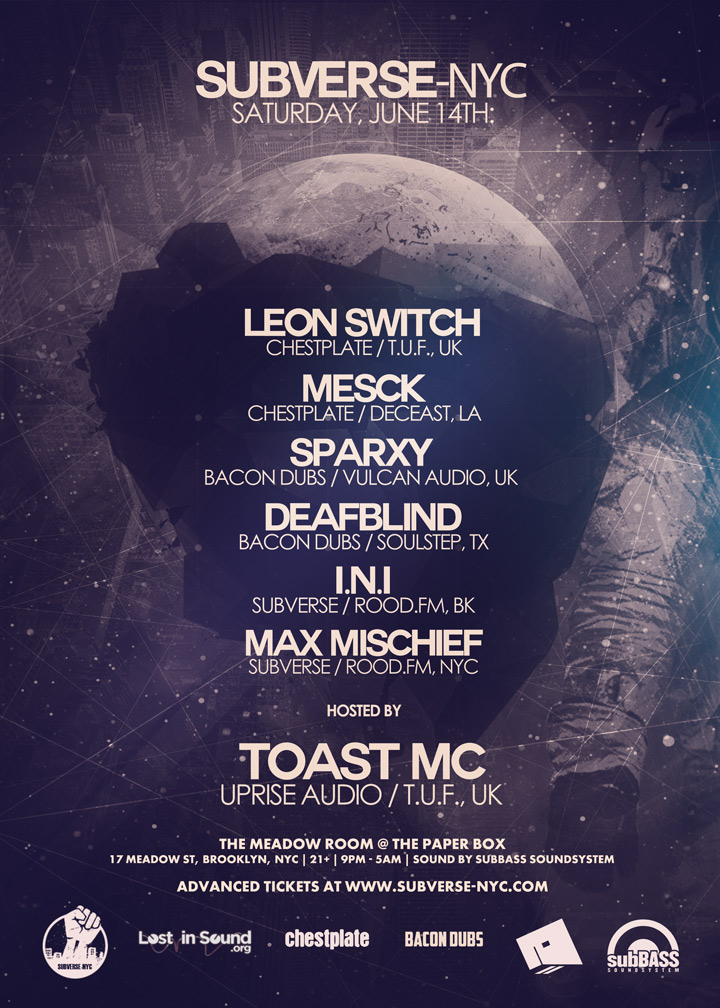