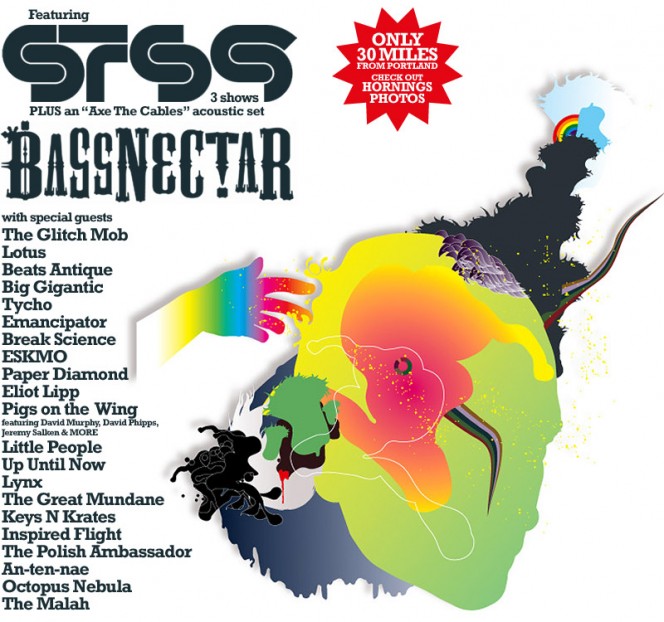 Well, it’s finally here! We at LostinSound have been looking forward to STS9’s Re:Generation Festival since it was first announced months ago. The last Re:Gen was held in 2007 at Deerfields, near Asheville, North Carolina. Check out this video of STS9’s “Ramone and Emiglio” on 7-7-07 at Re:Gen in Deerfields.

This year’s event is now being held in the heart of the northwest, at the legendary Horning’s Hideout just 30 miles northwest of Portland, Oregon. Granted, I am a Tribehead through and through, so three nights of Sound Tribe plus an “Axe the Cables” acoustic set are pretty much all I needed to hear to put Re:Gen on my summer festival radar. However, the second round of artist announcements vacuum sealed the deal for sure. With a talent-infused lineup including Lotus, Big Gigantic, Beats Antique, Break Science, Tycho, emancipator, ESKMO, The Malah, Octopus Nebula, and Lynx, and the fact that it’s being held at Horning’s, how could I possibly miss this one?? If you’re going to make it, make sure you make it down to the Main Stage at 3:00PM on Friday for Pigs on the Wing, which is a Pink Floyd-oriented  side project comprised of David Murphy and David Phipps of STS9, Jeremy Salken from Big Gigantic, and other surprise guests. Check out Regenerationfestival.com for ticketing and more info!

This one is going to be quite the endurance contest, as music starts on Thursday at 4:15 with a set from Colorado-based fire electronic quartet Octopus Nebula (I know this is early, but I recommend that if you have the means, do NOT miss this set) and ends at 10PM on Sunday with the final Tribe show of the weekend. In this author’s opinion, we may very well be in store for the best Sound Tribe in a long time. After coming off probably the least impressive couple years of their musical careers, with hyper-electronic exploration that angered long-time fans and attracted a much younger and more immature crowd, the band started to look back to its roots in 2010. After seeing an amazingly intimate and instrumental jam-filled show at Higher Ground in Burlington, VT last August, I thought that the boys were back for good. However, bassist David Murphy‘s diagnosis and subsequent treatment for a rare type of sinus cancer forced the band to cancel its entire winter tour after Mayan Holidaze. Murph has very thankfully now recovered, and the band played a handful of shows this spring and has already played at several festivals this summer, including Nocturnal, Hangout, Summer Camp, Bonnaroo (questionable move..), and Wakarusa.

But, Re:Generation is their festival. It’s not just a show or a set at someone else’s festival, it’s a 1320 Records event featuring four sets of STS9 throughout the long weekend. In my opinion, this festival means a lot more to the band than any other show they’ve played since their break this past winter. All bands tend to really play their best when they’re in an environment of their liking. Even the Disco Biscuits usually play well all weekend at Camp Bisco. Camp is in a few weeks, and don’t get me wrong, it’s going to be epic musically. While I personally will not be making it to Camp Bisco this year, my imminent participation in the Tribal Gathering of the summer at such a naturally beautiful place at such a transitionary and important time for STS9 and indeed the rest of us that are conscious enough to see it should hold me over quite nicely until The Big Up!

“Here We Are, Here and Now”

“Everybody is a reflection of me… and we are all one.” -talking about people’s personal…