Special Announcement:
Music Ecology is proud to host an Amazon Mushroom Alliance Benefit with Evolver Boston from 8 PM – 10 PM before our regular festivities. Join us for a film screening and learn how mushrooms are being used to clean up toxic oil waste on indigenous lands in the Ecuadorian Amazon. Please visit the event page below for more details.

At 10 PM see Music Ecology taken over by the forces of UnheardUV crew who will bring you:

–Mammox (Psychedelevator)–
Mammox formed in April 2009 with Mark C. Aylward (vocals), Nate Belasco (keyboards), James Staub (bass), and Zachary Zukowski (drums). Together they introduce a psychedelic collaged sound rooted in hip-hop, glitch, electronic, and world music. In attempt to describe their music, the band stated: “We are not merely fusing styles–hybrid groups are nothing new. We are breathing new life into the music we sample by mixing it with our own instrumental improvisation and Mark’s distinctive wordplay.” Not only is their music unconventional, their entire band process has also strayed from the ordinary. They created an album first, learned their songs on traditional instruments afterward, and, lastly, picked a band name. Unlike many laptop music artists, Mammox is raising the bar in regards to live performances. Although the music is largely composed of samples, the band performs with a combination of traditional instruments and live electronics.
https://www.facebook.com/mammox
http://mammoxmusic.com/
http://mammox.bandcamp.com/
http://myspace.com/mammoxmusic

-Tactical Lisp (Psychedelevator)–
Tactical Lisp is Nate Belasco and Zack Zukowski. Every track is an experiment unto itself, and no attempt is made at cohesion. Electronics are exploited with reckless abandon, the song structures are haphazard but organic, the vocal layers are devoid of meaning, and the drum beats are mechanically absurd. This is the best tribe-wave doom-step you’ve never heard.

–Pressplay (Unhearduv.com)–
A Boston based DJ focusing on danceable synth leads surrounded by the dirtiest of bass lines. You will have a tough time standing still while listening to his carefully crafted mix sets which build slowly from the ground up, evenly distributing street-bass and purple-wow dubstep to your brain with hints of house, dnb, and drumstep mixed in.

–Little People–
You could be forgiven for thinking that growing up in the Swiss alps in the 90′s wouldn’t exactly be the best place to be exposed to some of the best underground hip hop New York had to offer at the time. However anglo-swiss producer Laurent Clerc AKA Little People, argues he couldn’t have been in a better place. Thanks to the forward thinking programming of Laurent’s local radio station and a DJ with his finger on the pulse of a golden age in the making in New York – Laurent’s musical education in all things hip hop was of the highest order. An old Mac and a stack of old LPs were mere catalysts for Laurent to try and emulate the sounds from across the pond.

A subsequent move to the UK introduced electronica to his broadening taste and influenced his own sound. Then followed work soundtracking short films and theater productions which added a cinematic element to his repertoire. Following a disheartening stint doing some production work for a Paris based hip hop label convinced Laurent that he should be doing things on his own terms. A self released EP led to being picked up by Illicit Recordings in London – through which “Mickey Mouse Operation” was eventually released. This was 2006 and his debut album only made a very modest splash. Over the past 4 years it has however turned into something of a sleeper ‘hit’ – gathering fervent support in the US and slowly climbing the US iTunes electronic chart in the process. Laurent seems to have timed the release of his second album perfectly – due to drop in Spring next year just as the interest in his first album is peaking.

Little people’s sound is part beats, bleeps and snippets of other people’s music. Stemming from hip hop, it effortlessly combines warm synths, intricate melodies and string arrangements. The cinematic quality of his sound led to his music being used on CSI and other shows in the US and UK.

Little people’s upcoming album sees Laurent shift his focus away from what he feels is the over reliance of samples in his genre, towards composition and the use of organic instrumentation – whilst keeping the trademark warmth of an old piece of vinyl. However rest assured, the beats and the synth bleeps are still very much on the menu.

–czARgb–
Born in Puerto Rico, Aurelio Ramos (Czargb) is a Boston based producer of electronic entertainment. With an ear for downtempo grooves, crunchy beats and an eclectic blend of old school influenced song structures Aurelio‘s tracks are truly one of a kind in the modern EDM ecosystem. Trained in the black arts of semiconductor seduction, Aurelio has expanded from music production into mixed media art, live video and installation art.

–Ali Berger–
Ali Berger is a producer, DJ, and live PA from Princeton, NJ, now living in Boston. His music is sometimes chilled out, sometimes heavy, but always glitchy, electronic, and above all, funky. His live shows incorporate on-the-fly mashups and remixes of his own original tunes, which range from glitch-hop to electrofunk to drum & bass. You can catch him rocking shows around Boston and on Lost in Bass on Glitch.FM every Monday night. Ali has a free EP and single out at http://aliberger.bandcamp.com/and tracks forthcoming on several small but notable labels in the summer of 2011.

For over a decade, DJ PARALLAX has pushed the dance music envelope with his ever evolving style. Performing for some of the most diverse crowds internationally, his sets have been witnessed from the United States to Europe & Canada. Scouring the planet for music, DJ PARALLAX always delivers the heaviest basslines and floor stomping underground beats.

DJ PARALLAX, also known as Frank Parallax, began his career producing. Looping samples on an old 486DX PC in 1993 he was completely unaware of the blossoming underground dance music scene. Exposed to the dance music scene a few years later, he knew exactly where he fit. Already a DJ on a local radio station he switched formats and DJ PARALLAX, as he is known, was born. Spinning 6 hours at a time On-Air he began mixing and blending different styles of dance music. “Earth Electronic”, his radio program on WXPL 91.3 FM, continued for 5 long years. Eventually teaming up with other local DJs and bringing in special guests the show flourished for a time and was the only underground dance music radio program in the region. With the growing success of the radio program, DJ PARALLAX began his journey through the local rave & club circuit. Promoting himself with countless hundreds of CDs and promotional materials he gained greater exposure in the Northeast. Playing from Boston, to Manchester, to New York, he perfected his skills in dancefloor filling and was soon picked up by many respected regional & national crews.

More recently, DJ PARALLAX has crossed over into the global scene. His successful THUMP mix series has received critical acclaim from respected artists and labels with distribution worldwide. These mixes garnered so much praise he was voted the “#1 Speed Garage DJ in the World” (thedjlist.com – 2008, 2010) two separate times. Now with upcoming and recent gigs all over the New England, New York, Miami, Halifax, Denver, Edmonton, Vancouver, and the UK, DJ PARALLAX continues to dominate the globe with his signature style of Speed Garage, Bassline, and 4×4.
http://www.djparallax.com/
http://www.facebook.com/frankparallax
http://www.soundcloud.com/djparallax

–JSB (Breakers Paradise, True Crew)–
The man behind Boston’s new breakbeat night breaker’s paradise. JSB‘s sets have been described as “room-shaking, hard-hitting, booty-bouncing, head-nodding cocktail of awesomeness!” JSB has been spinning since 2000 but has finally hit the scene hard. Starting in 2008 in the underground he continues to hold down one of the best lofts Boston has ever scene. Throwing one successful party after the next JSB is ready to bring his style of music and parties to the masses! Always known for taking “risks” live and working in a lot of remixes JSB‘s favorite part of electronic music is the “what’s gonna happen next?” factor. Breaks is the perfect genre for him as he has embraced the challenge of combining big beat sounds from every genre of breaks into a cohesive sound that always shocks people and has them wondering what tracks were those, and did he do that mix live or was it all one track?
http://www.soundcloud.com/djJSB
https://www.facebook.com/pages/JSB/166923033328226?sk=info 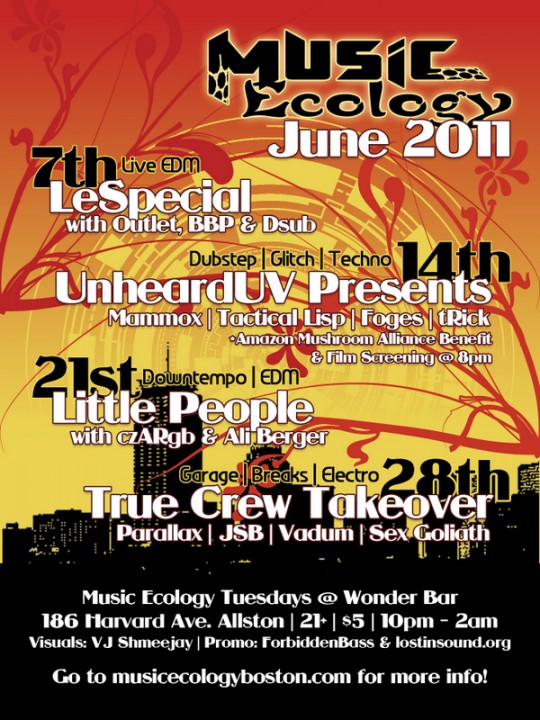 Download your copy of Govinda’s Decadence here: https://govinda.bandcamp.com/album/decadence Decadence by Govinda Lately, I haven’t had…