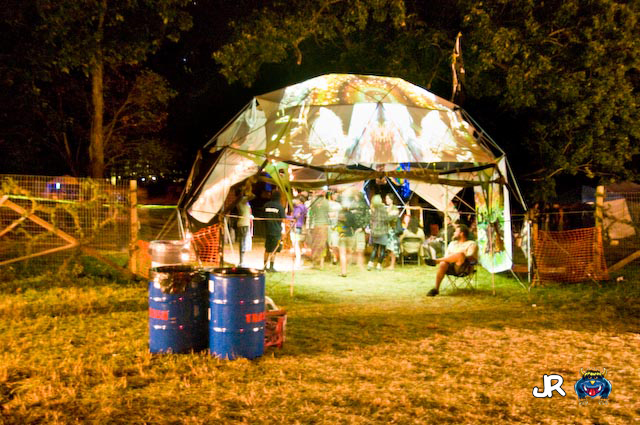 There aren’t too many first year festival success stories. Lets be real- music festival production is no walk in the lot. It usually takes years in the hole, and serious time spent learning from mistakes, to create a sustainable, reciprocal environment for festival goers. It seems to be becoming more and more difficult to find a safe and welcoming venue for these important gatherings of artists, musicians and the creative counterculture. I guess having thousands of folks getting rowdy, raging around the clock and bumping beats into the stratosphere isn’t for everybody. Luckily, for East Coast natives and heads from all over, The Big Up Festival held it down.

Sunnyview Farm in Ghent, NY is like Aruba for outdoor types, a Club Med for music fans, a eutopia in the Catskills. There were rage pirates, glow stick Indian shamans, tree octopi, warlocks and wizards, countless live artists and musicians of all kinds- the stuff dreams are made of. Shireworks Productions‘ previous events at Sunnyview- Let It Roll and Lost Weekend in Shangri-La– were precursors to what they had planned for The Big Up.

The air and energy of the old equestrian farm is of a kind that seemingly erases any negative thought or feeling. Much of the camping area exists in the maze of a forest while the rest lay atop rolling hills. There are paved roads and cleared trails, with shaded areas and a wide open field for the music and vending.

Stables that were used to train horses for decades were miraculously transformed into a rowdy, psychedelic late-night music stage. I’ve experienced many raging late-night tents, but there’s nothing like kicking up your heels to OTT or swaying to Emancipator inside of a solid, aged and wooden structure. The entrance to the Artistsphere building faced the entrance to the late night barn. Inside, you could watch up to five live painters create art, purchase finished works or make use of the extra space to dance. With visuals projected on all the walls, and a pull down screen with live video of the late night barn, the Artistsphere was a huge success.

I arrived at Big Up late Wednesday night as the LostinSound Dome Crew was completing construction of our Lost Tribe Dome. To the disdain of many of the supporters of the Dome’s live music capabilities, we had offered our services to the Big Up Festival merely as an art installation. Throughout the weekend, attendees would have to travel through the Dome to enter the music arena from the campgrounds. Unfortunately, such a portal must double up as a kind of festival Customs where folks are stripped of their beverages. On mid-day Friday, the Crew eventually banded together to pull over the Dome’s canvas ceiling. Patrick Boyle AKA The Chaos Practitioner tied a custom Use Your Dome pirate flag to quite possibly the biggest tree limb I’ve ever seen. We then stuck it through one of the openings at the top of the dome. A few hoodrats tried to steal it, but Big Nick did a hell of a job guarding it- rage pirates don’t get their flags pirated. Drew Suto– VJ and resident visual magician- provided the Dome with an amazing projection show above the entrance to the field.

The first set I attended was Consider the Source in the late night barn. I have been excited to see this upcoming NYC band for months. After reading a Relix article from last August describing the group as one of the “5 Artists You Should Know About”, I knew I had to give them a listen. I was intrigued by their eclectic sound, meshing tribal beats with jam play. Even now, as I listen to their track “Moisturize the Situation”, my roommates are asking me if I am listening to a new Beats Antique song. These guys have got something totally different going on.

At the Big Up, their live show was fucking NUTS, weaving from funk to metal to jam to Middle Eastern influenced sounds. As I watched Gabriel Marin owning the double-headed fretless guitar, I couldn’t help but envision him with an extra pair of arms. His instrument screams like a banshee as the rhythm section molds the music from heavy rock to deep groove. Drummer Justin Ahiyon was rocking a bandanna wrapped in neon light rope, switching from an electronic drum kit to organic skins and brass. John Ferrara’s fingers creep and crawl down his bass as he slinks slowly across the stage. This is the kind of music where really badass babies come from.

Tucci provided the untz and dance beats before Emancipator’s late-night therapy session. I had been running around non-stop since I had reached the festival and the ONLY reason I was awake at 4am that night was for Doug Appling’s music. I didn’t have the will to talk, socialize or do much other than dance and get a music massage. Great way to get me to sleep at a festival (a nearly impossible feat).

Over the years, I have seen Dopapod play multiple house parties and venues in the Allston/Brighton area. Their Friday afternoon set on the Big Up Stage would be my first time showing them love at a music festival. With their first full length album release, Radar, the Berklee alums have stepped up their game both in the studio and on stage. Due to a 2 pm time slot, there wasn’t much of a crowd when their set began. But I assure you, by mid-set the main stage field was moving like a Mason jar filled with fireflies hopped up on funky grooves. As he sits behind his Moog Prodigy and beloved Fender Rhodes, Eli Winderman knows he’s gonna light the festival up with his double jointed wrists. A smirk forms below his white Wayfarers as he sways to the nasty beat laid down by bassist Chuck Jones and new drummer Neal “Fro” Evans.

Often the biggest highlight of a Dopapod set is their choice of a cover song. I have seen them do justice to Modest Mouse, Rage Against the Machine, Radiohead, Nirvana and Daft Punk. “You know Dopapod really likes to do medleys of bands,” Winderman said, “ I think you guys will enjoy this one and be able to tell who the band is right away.” The Big Up was not ready for the unreal (7:30) Led Zeppelin medley (Kasmir>Black Dog>Good Times Bad Times>Immigrant Song>BlackDog>Stairway to Heaven>The Ocean). Rob Compa’s impeccable shredding skills are a sight to see as he scales his fretboard ambitiously. I think he does Anatasio, Santana and his other idols proud, and I have complete faith in his ability to lead or let Eli throw it down.

After probably the most beautiful day of weather I had experienced at a music festival, Boston’s infamous indie-jamband The Indobox played the dusk set. Due to some difficulties on the Second Stage, the Box had to begin their set early on the Main Stage. Incidentally, it was hard to figure out who was playing when they began. As the correct start time approached, their fans gathered to watch. I thought that the second half of their set was raging, and it was different than seeing them in a venue setting. I was really into the intensity of their electro jams, and feel like I am beginning to like the vocal element, despite how out of place it can sometimes sound.

Higher Organix, the musical hosts of the Big Up, were a huge part of this festival’s success. Not only did Jules Jenssen (drums), Clayton Squire (guitar) and Brian Ross (bass) play three sets of music- they also worked tirelessly for days, building, orchestrating and preparing the festival. My favorite set of the weekend was Friday night on the Main Stage.

The band was accompanied by a powerful 100% improvised horn section for the occasion (Tyler Gasek– sax, Asa Vanasse– sax, Ian Steward– trumpet). When Jules wasn’t getting other bands set up to play on stage, he was letting looping beats loose on his drum kit. His style of play reminds me of Johnny Rabb (BioDiesel). Nothing better than watching a drummer lay down some Drum n Bass, than watching as that sound remains and he plays something totally different- trippy instrumentation. Clayton Squire’s guitar effects are vibrant and eccentric, and often I am left wondering where the APC or synth is that is producing these sounds. I have to add that the shape of his dreaded ponytail in front of the stage lighting looked like a work of art. With the brim of his ballcap tilted into his face and his XL tall tee hanging off him, Brian Ross has a distinct swagger about him. His basslines are fatty, heavy panty droppers that held the band’s livetronica improvisation together. The trio uses their Trance influences to create spaced out builds, and their Hip-Hop/Dub roots to drop a resounding beat.

It was my first time catching a Sub Swara set and the Big Up’s late-night Ion Stage was the perfect place to see what the womp duo of producer-percussionists’ Dhruva and Sharmaji had to offer. Beneath the massive blacklight mandala, Brooklyn based Sub Swara brought the tribal Dubstep to the dance floor. I was most impressed by the array of electronic drum pads they had on stage. They would switch from turning knobs to making live beats with their hands or drumsticks. Unfortunately, the lack of rest and the prospect of another full day of raging caused me to dip out of the barn early, but I can’t wait to catch them again.