When was the last time you were astonished? If you are like me and you believe that music shares a spiritual connection with our natural bodies, then you already have something in common with Nadis Warriors. Their influences include Pink Floyd, Terrance McKenna, Quantum Physics, and Raja Ram. So yeah, it’s safe to say Nadis Warriors and like minded freaks like myself are a match made in an otherworldly plane. This Electronica group, out of Austin, has just released a double album download at NadisWarriors.com which is quickly becoming the most played music on my iTunes. These guys produce positive psychedelic music like pros.

A splendid combination of instrumental Dubstep with Livetronica mentality, and Twisted Records-style tribal Psytrance, Nadis Warriors have performed onstage with Alex Grey, and their chakra album artwork is clearly influenced by his art. They are true believers in harnessing the power of music and dance to heal and enrich our lives. “Our job as a band is to create an experience where the audience is part of this communal moment,” Warriors’ beat master, Jason Hahn said to dfDubReport.com, “where we all can create a community of healing, sharing, caring, and love together.” There are surreal moments within the tracks on both of these albums that are tremendously intriguing, like an undiscovered planet. The band’s live recording from this year’s Nocturnal Fest is a good example of how the studio work is explored on stage. Founding members Jared Ingebretson, Matt Cain, and Jason Hahn have taken the band’s live show to the next level, with the recent addition of live drummer Mike Hall. The band seems to support having live dance performers join them on stage as well. Finally, Austin- the music capital of the country- has produced a worthy psychedelic electronic act. Be sure to take full advantage of the impressive and meaningful sounds that this group has to offer. 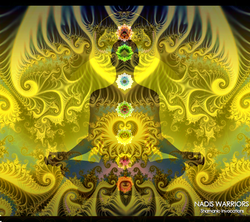 “Following the Nadis Warriors’ style of musical Chakra Cleansing, this album takes you on an epic journey of awakening.  From hauntingly ethereal rides to tabla-induced bone-rattling trances, this album is meant to get your chakras vibrating.” 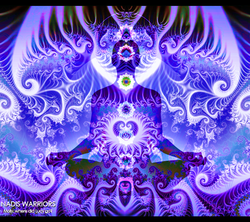 Molly, Where Did Lucy Go?

“A Five-Part Concept Album. We won’t spoil the fun for you on this one. Just open your mind and figure out what it means to you! Guaranteed, at the very  least, to get your feet moving.”