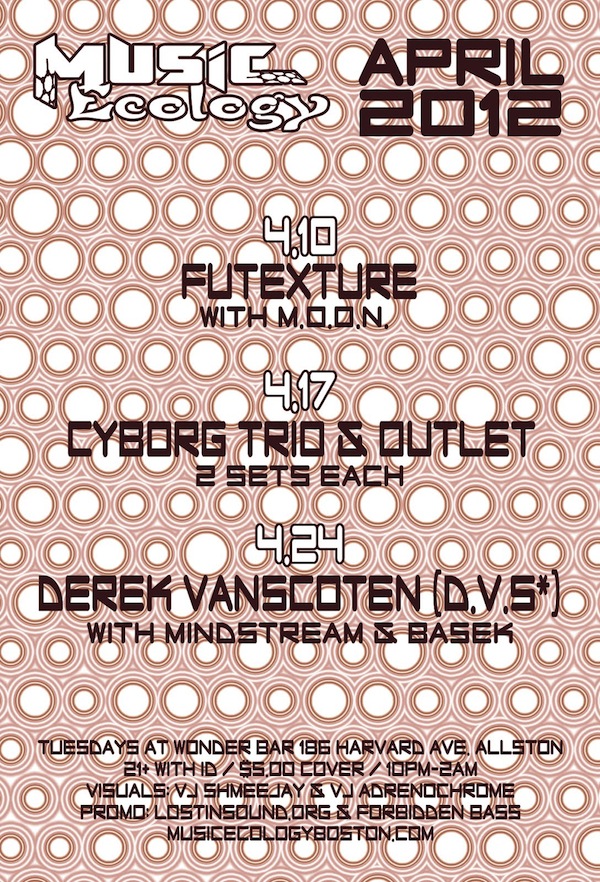 Music Ecology is a Boston based event production collective formed in the summer of 2009. Our weekly Tuesday night residency at Wonder Bar, a monthly residency at Machine as well as numerous events throughout the city have exposed Boston audiences to numerous local, national and international talent. Our upcoming events include

For this and future events please visit http://www.musicecologyboston.com/
Find us on Facebook at http://www.facebook.com/MusicEcology
Follow us on twitter at https://twitter.com/music_ecology
Live recordings from our Tuesday nights at http://www.soundcloud.com/music-ecology

Futexture is the exploration of (trans)personal experience through sound. For David Krantz, former producer of Agobi Project and 22 year old musician based out of Asheville, NC it is the logical evolution of a lifelong musical obsession.

Combining the rhythmic appeal of dubstep and hip hop with melodic dreamscapes and creative sound design, Futexture skillfully weaves a futuristic blend of glitchy bass-heavy IDM and jazzy techstep into a forward thinking sound that defies classification. This unique sonic synthesis is equally suited for both headphones and the dancefloor, and many have described it as a breath of fresh air in electronic music today.

A new project as of late 2010, Futexture has been well received in a variety of musical circles. In the first six months of 2011 he has shared the stage with Tipper, Bassnectar, Kilowatts, Nasty Nasty, Bonobo, Ana Sia, Big Gigantic, Heyoka, Falty DL, Bird of Prey, Mimosa, Mindelixir, and Mount Kimbie, and Vibesquad.

Channeling the transmutation of (trans)personal experience into intentional musical exploration}—-

Can you feel it?

The innovative Cyborg Trio are known for their dynamic, psychedelic improvisation and carefully crafted beats. Eric, Sammy and Tim released their fully improvised “jam” album in early 2009 and since then have been getting more exposure in both the local and national scenes. Their tight, trance-inducing tunes are reminiscent of a DJ; you’ll have to keep reminding yourself that these guys are playing live instruments. They bring the crowd through a journey, offering ups and very relieving downs as the beat drops and groove waves travel through the room, filling the venue with good vibes. Self-produced and live, the new CD gives you a taste of what their live show will entail. Buy their CD “Broken Beats, Vol. 1″ on iTunes or Amazon and listen to the depth and detail produced from live improvisational jams by The Cyborg Trio.
http://cyborgtrio.com
https://www.facebook.com/CyborgTrioMusic

Jonathan Belfontaine, otherwise known as Outlet, was destined to make music from the very beginning. At a young age, Jon was given a guitar. Soon afterward, he stumbled upon a broken amp, took it apart and put it back together into working condition. Having an incredible ear for music, he was able to pick out notes, and play along with any song. Over the years, he’s played in different rock bands, but his musical interest never stopped at just the guitar, always picking up a bass or a set of drumsticks. While being influenced in different genres of rock, he also became deeply integrated into the electronic scene. Soon he had a keyboard and was experimenting with making music all his own, with psychedelic melodies and hypnotic tones, empowered with heavy instrumentals. After a brief hiatus, his burning passion was reignited when he and his soul mate Elisabeth Marcoux went to Rothbury’s music festival in Michigan. Hearing the mind blowing artists perform with such love and high energy, and being immersed in the unified and uplifted crowd, sparked Jon’s need to make music again. They immediately went out and bought him a Juno G. The new keyboard, paired with his discovery of Ableton Live, allowed him to explode into creativity again, this time integrating the sounds of hip hop, soul, funk and trance. He has now been producing a dance oriented, groove inspired, glitchy style of music that is energetic, passionate and fun. Of course, infusing his positive vibrations and inspiring light, baked into every morsel of each tantalizing song. The concoction of organic sounds whipped and blended with original bass lines and drum patterns, along with his ability to manipulate the texture and flavor of each synthesized note will leave the listener delighted in savoring every delicious layer baked into every song!
http://www.outletmusic.net

Derek VanScoten is a guitarist/ producer/ educator in Brooklyn, NY. He strives to create that elevated feeling in the listener’s chest with his guitar-soaked experimental dance beats.

No stranger to the live band scene, he has also performed as a respected multi-instrumentalist with acts as diverse as DJ Logic, Devotchka, The Motet, and the Boulder Philharmonic.

Mindstream music spans across the genres of EDM from dubstep and electro to funky down tempo and hip hop. Each song aims to create a sonic atmosphere that uses sounds familiar to bass heavy electronic dance music to build environments for instrumentation and musical improv. Live shows always feature Chris Mack on various organic and electronic instruments and often bring in other guest musicians and artists like live painters to make each show a unique audio visual journey. 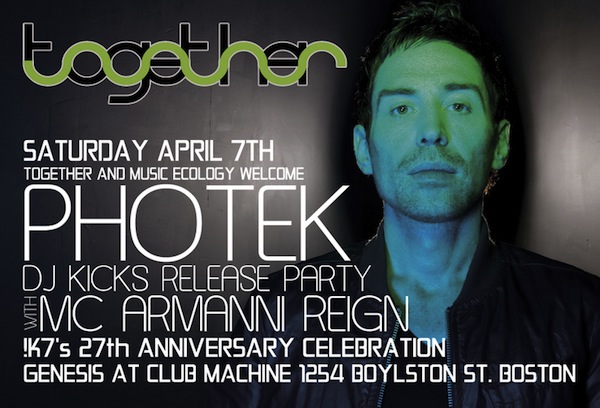 We’ve partied like there is no tomorrow. We prepared for all the carnage of the apocalypse. Instead we got a second chance. A chance to create a new world, to raise our faces to the sun, to breathe this new air, to reach out to our fellow human, animal or machine… A chance to finally embrace our differences and build a world unlike any other. We invite you to Genesis. Witness the beginning…

The time has come for a new installment of Genesis – a monthly party brought to you by Music Ecology, Kate Van Rees and VJAdrenochrome. This particular month is quite special though as we are teaming up with Together festival to invite you to the most amazing Genesis event yet. So many things assembled to make this a party you would never forget.

In Association with the Together festival, our musical guests this time will be:
Photek with MC Armanni Reign

If there was ever an electronic music Illuminati — a shadowy organization of producers who secretly pull all the strings — Photek would probably be one of them. This guy’s been a part of everything since Drum & Bass in the 90s, including laying the foundations for dubstep and remixing everyone from Trent Reznor to Ray LaMontaigne. MC Armanni Reign, meanwhile, is one of those rare talents who started rapping during elementary school lunch. Since the early 00’s, he’s been exploring non-traditional rap production styles like Drum and Bass, Electro, and Dubstep.

It just so happens that much anticipated DJ Kicks album remixed by Photek is dropping in the US the night before, therefore making the April 7th event a release party!

To top it all off, K7 Label decided to celebrate their 27th anniversary w/ Together at this event. 27 years!!! Think about it.
http://www.k7.com/welcome.php

In honor of this special occasion, we will resurrect all the deco from the previous events as well as add numerous new items. We highly recommend getting mental health insurance before attending this event since we are pretty sure your minds will be blown away!

As always, creative attire is greatly encouraged. Let’s show how Boston can party!

We hope to see you on Saturday, April 7th for this night of great music at:

The explosion of Drum ‘n Bass in the U.S. is relatively new, and brings along…