Lucibel Crater is an uncompromising jazz fusion act made up of married couple Leah Coloff & Sarth Calhoun and featuring Paul Chuffo on drums. The group plays challenging, howling electronica with a deranged cello, a mad new instrument called a Continuum Fingerboard, a few samples and a mix of jazz, rock and electro drums.

Leah’s fierce Cello, voice and lyrics carry most of the songs, boldly striking out into feverish wailing before quickly quieting, unpredictable as a summer storm.

Sarth mans the Continuum Fingerboard, a device capable of smooth sonic manipulations, shown in the video and explained in the interview below.

The band has a connection with Lou Reed, who has appeared on tracks and helped with production. Sarth is a part of Metal Machine Trio, a side project Reed put together that performs dreamy, ambient live shows, fully improvised and unplanned. Very patient, often minimal and noisy, the band is a release for both musicians and fans and has created some stark and powerful moments that at different times mourn and celebrate the machination of our world.

Lucibel Crater is a vessel for avant-garde poetry like Portishead, Gang Gang Dance and Soul Coughing, an electronic bounce with a voice haunting and unique.

Noisy, with moments of melody and discord, you sometimes wish they’d just settle into the hot grooves they approach but seem to resist on purpose, determined not to be simply pleasant or catchy, petrified of being remotely poppy or mundane.

I love them, give a listen!

Lucibel Crater – Where You Are 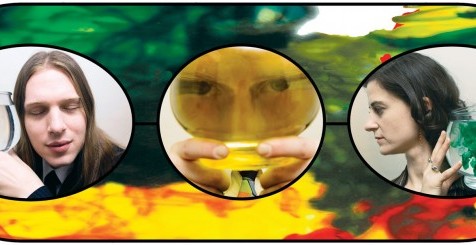 I spoke with Sarth Calhoun, keyboardist, sample and effects wizard for the group, and asked about its formation, unique equipment and projects with rock legend Lou Reed.

LiS: Tell us a little about how you and Leah got together. Which came first, the romance or the music?
Sarth: That’s a funny story… “the chicken or the egg”… you tell me which came first… I met Leah because I answered an ad in the Village Voice which was seeking a bass player. This was when she was putting a band together to support her first full-length ‘Dark Sweet Heart’. But I didn’t get the gig! A couple of days after the audition she called me up and said “We’re going to keep auditioning bass players, but do you want to catch a movie?” And that’s how it started. She actually took me to see “Modulations” which was hugely influential in my musical direction. Eventually I lured her into a free improvised group I was doing at the time and it just grew from there. So I guess it was simultaneous.

LiS: Tell me a bit about the Continuum Fingerboard you use. Who invented it, what does it do?

Sarth: The Continuum Fingerboard was invented by Dr. Lippold Haken and it is the only high-speed, high-resolution, polyphonic [you can play with more than one finger simultaneously, i.e. chords] XYZ controller commercially available.

XYZ controller just means it senses each finger’s position in 3 dimensions, front-to-back, left-to-right, and pressure. It is extremely fun and expressive to play, and it brings synthesis and computer music into an emotive, instinctive, and musical realm that no other controller has been able to do. I showed it to Moldover earlier this year, when he was working on developing his controller (the Mojo), and he had the same reaction many people do: This isn’t a controller, it’s an INSTRUMENT. When I first hooked it up I realized it is the instrument I’ve been looking for my whole life.

LiS: Leah’s style is so one-of-a-kind.. What are her musical influences?

Sarth: Leah attended the San Fransisco and New England Conservatories. She was influenced by Tom Cora, who played with The Ex, PJ Harvey, Rickie Lee Jones, Kristen Hirsch and Chrissie Hynde. She also reads a lot of interesting stuff. She turned me on to Cormac McCarthy a long time ago, and I can hear him clearly in the first song of The Family Album “There Was a Time.”

LiS: Tell me about the Lou Reed connection. How did he discover you, what was the tour like, what do you like about the Metal Machine Trio project?

Sarth: I met Lou through our common interest in Chen style Taijichuan. We both study with Master Ren Guang Yi, who is a prominent lineage holder based out of New York. I invited Lou to an early Lucibel show and he seemed impressed. He offered to contribute when he heard that our guitar player had left. We also started working together on some taiji/meditation music for a DVD “Power and Serenity” that has been recently released – http://rentaichi.com It just grew from there. It’s been great touring with him, his band is full of fantastic musicians as well as his brilliant technical people and I learn a lot from them. The Metal Machine Trio is pretty intense… I feel the shows take me into an altered state, it might have taken me 10 days to downshift my reality after the Blender shows. If you want to perceive alternate dimensions, try having sex while listening to “Creation of the Universe.” I really look forward to our April MM3 tour.

LiS: Any Tour Dates or recording coming up?

Sarth: Lucibel Crater is playing Joe’s Pub February 3rd with MM3 saxophonist Ulrich Krieger
as a special guest, and in Dresden on the 26th of March. We’re working on a new set called “Hard Boiled Wonderland and the End of The World” after the Murakami novel. We will be previewing some of this in the upcoming shows.

Show some love at:

And grab The Family Album now at