Melbourne has a knack for breeding and nurturing unique electronic music and this man is no exception. After almost ten years in the game, four EP’s and two albums, he emerges again with his third full length offering, Aerial One, this time on his own label Corymbia Recordings. Known for his unique style, this new album contains just that – an eclectic blend of the acoustic and the electronic, a hard to pigeon hole sound best described as ‘just music.’ We caught up on the eve on this new album to chat all things griff, and it went like this..

[LIS] So you work for the ABC (Australian Broadcasting Corporation)?

[griff] I do.. How the hell did you find out that?

I have my ways.. Is that in radio or TV?

I work for ABC radio part time, or quarter time maybe would be a bit more fitting, as a sound engineer. Been doing that for around five years now. I work in the morning, come home, have a nap, make a coffee and then get stuck into the tunes. Trying to write more and more at the moment.

Nice. So you play a pretty unique style – if someone was to ask you to describe it in two words what would you say?

Straight to the point, I like it. It’s been about two years since your last album, does this mean there is another one in the works?

Yep, I have several in the pipeline. First up I have my third album Aerial One coming out on the 19th of February, on my own label that I’ve just launched called Corymbia Recordings.

Well the jury is out as to how exactly I’m going to do it, but I have roughly around 50 tunes for a bunch of different projects. There is also a whole bunch of drum and bass to finish off and release. Aside from the midtempo, glitchy stuff I do, I love drum and bass. I’ve been writing it for ages but never really released any of it. One of my colleagues at the ABC is a drummer, so we have been making a bunch of drum loops at his house so i’ve got a whole lot of fresh breaks to put in my productions.

That is one consistent theme in your music – organic drum loops.

Yeah I guess so, there aren’t many pieces of music of mine that don’t include a real drum kit. For me, it was easier to get my music sounding like my idols if I used real drums. When I first started I wanted to make music that sounded like DJ Shadow, and one day I realized that the part I loved about it was the realism and grittyness of his drums – sampled breaks. I just think you cant get that real human touch from programming. Don’t get me wrong, people can program pretty well, but you still don’t get those one off flukey feel to it that you get when recording real drums. For me, the gold is the one off recordings – “what was that you played???”  Just make sure you record EVERYTHING.

You’re onto something there, producers can definitely get lost in programming drums. Much better to record them if you have the tools at your disposal. I read you used to work in a recording studio yourself, working as an assistant engineer for bands such as The John Butler Trio and the Cat Empire. How did that come about?

Well I studied Audio Engineering at RMIT, and in my second year I did work experience at Sing recording studios in Richmond and went on to get a job there as an assistant engineer. It was a great place to work and I worked with a few great bands as well as my fair share of not so great bands, but overall it was an awesome place to be involved with.  The most incredible gear collection ever and run by the most amazing people.

I once heard a radio interview with you where you mentioned that you didn’t play a festival show until you were 30, so how old were you when you started releasing tunes?

Yeah that’s about right, I believe my first release was a year before that so I was about 29. I started getting gigs once I released that in 2009, and then in 2010 I went to Burning Man and played there. I actually had really bad stage fright, I couldn’t get up in front of people and play for a long time, then I got the invite to go over to Burning Man and I couldn’t really say no to that. Plus, I thought if I went over there and played then nobody would even know me so it would be a lot easier, which somehow in my head at the time that made sense but it turns out I only played to about 10 people, all of whom knew me well.

When did you start producing?

Well I bought my first microphone when I was 12, so I’ve always been interested in recording and making music. I got into electronic music when I lived in the UK for a few years after high school, and once I got back to Melbourne my housemate at the time bought an MPC2000XL and we would just smash out beats on that and gradually got more and more obsessed. Eventually I thought, “Alright I’m going to go back to school and figure out how to do this properly because nothing sounds right.” Bought a copy of Logic and just sat on it every day. Probably have every day since then too.

How long did it take you from when you started producing to having your first release on a label?

Probably about sever or eight years. I kinda spent most of my 20’s going out and enjoying music rather than fully focusing hard on pushing my own. I was working in call centers on and off for years, but it got to the point where I thought if I don’t make a go of music now then I’ll regret it for the rest of my life, and I’m glad I did. 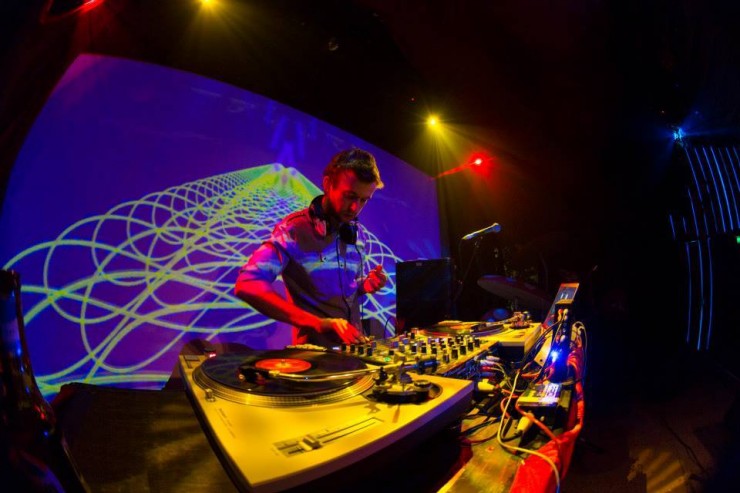 I’ve seen you play a few times – sometimes it is a DJ set and sometimes you’re playing a live set. So which one do you prefer and why?

They each have their good points and it still blows my mind that people really seem to connect with my music and want to hear it and that is really special.  On the flip side when I’m DJing I’m playing tracks that I have found and that I really resonate with and I find that it is super rewarding to share what I’ve been digging up.

Is there a particular set and setting where you would play a live set over a DJ set?

Well really it’s up to the promoter and what I have been booked to play. Having said that, I’ve definitely been cheeky in the past, knowing that I have been booked to play all my stuff and DJing instead, but other factors come in to that such as reading the crowd or the time I am playing. I don’t think my music really sounds like it is made for the club, not that it deliberately was not made for the club, but it is definitely suited more to the outdoor festival setting.

A quick google search returns many meanings of the word griff.. How did you get your name?

It’s just an old nickname from high school. I think it was just a really bad spelling mistake from a teacher that just stuck, and I’ve been known as griff ever since.  Specifically spelled with a lowercase g.

So you already mentioned you went over to North America in 2010. You have been a few times since, what is your take is on the festival scene over there?

I really dig Shambhala. I think it is one of the stand out festivals. It’s one of the most intense sensory overloads with all the lazers and décor and the people are just up for it – it’s great. Generally there’s less Psytrance at US festivals and less Trap at Australian festivals. I tend to prefer festivals that have as wide a range of music type and format as possible. The more variety the better.

Can’t agree more. Lets leave it at that.

Listen to the track “Magma” from his forthcoming album:

The Psychedelic Bass movement has made its mark in the electronic music culture. After a…