Was 2013 a big year for Denis Jasarevic, the Slovenian-born DJ better known as Gramatik? The hard-at-work 29 year old had more fun than is legally allowed in less free societies. The end of 2013 and beginning of 2014 saw Gramatik sailing the high seas on Holy Ship, hitting the slopes at Snow Globe in Tahoe, gracing San Francisco’s historic Fillmore and Los Angeles’ art-deco masterpiece, The Wiltern, all between tours in Berlin, London, and Paris.

It’s hard to imagine how this unlikely European could possibly handle any more torque on his rocket-fueled rise to fame. His latest release, The Age of Reason, may be completely reckless in that regard. 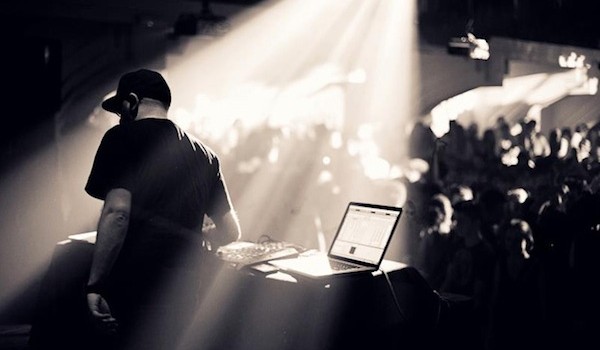 Gramatik is a bit of a digital mastermind, combining incredible musicality with smart use of emerging technologies to make an international name for himself on services like Beatport and SoundCloud. With The Age of Reason being shared for the masses in a collaboration with peer-to-peer protocol BitTorrent, Gramatik has shamelessly smashed the button that says, “WHATEVER YOU DO… DON’T PRESS THIS BUTTON!”

The BitTorrent partnership has allowed the artist to release a wonderful multimedia product, replete with music, videos, and graphics, over 800 megabytes of content, absolutely free. A recent Reddit AMA (“Ask Me Anything”) thread, titled “I release all of my music for free and I’m still able to pay my rent” generated over 1,300 comments. It’s an understatement to say that Gramatik pays his rent, since he seems to rarely stop and live anywhere.

According to that AMA, The Age of Reason has over 1.7 MILLION downloads. Although the paradigm of album sales and free downloads are not easily equated, that still puts the record in the hands of more than an RIAA-certified platinum release, verging on double platinum.

Gramatik is a perfect example of the successes of a globalized, interconnected dance music atmosphere. If he hasn’t already played live to an audience collectively larger than his country’s population of two million citizens, he is well on his way.

The Age of Reason features collaborations from a gang of skilled musical disrupters: Exmag, Gibbz, and Cherub, to name a few. Jasarevic is proudly sharing the stage and spotlight with a group of talented peers. It’s a refreshing dash of humility in light of an endless stream of attention-hungry press-play EDM megastars. Gramatik is a DJ’s DJ, seamlessly transcending from the breakbeats that caught the attention of Pretty Lights to funky, soul jams reminiscent of Stevie Wonder, J. Dilla, and Robert Glasper’s Black Radio Project.

Indeed, much of Gramatik’s execution is a throwback to big, sample-laden hip-hop beats. The Age of Reason opens with “Brave Men,” a dark, meandering jam featuring Slovenian band Eskobars. With dry, acoustic drums that slowly beef up through every break, Gramatik builds a platform for which to transcend live acoustic and electronic production. Portamento-rich melodies swirl somewhere in the sonic space between MOOG synthesizer, fuzz guitar, and vocoder. The ambling pace of the introduction lasts less than 5 minutes, before launching into stadium reverb drops. The blues-infused “Torture” is next, leading with a guitar-centric assault by Eric Krasno (of Soulive fame). A new take on Zeppelin-esque guitar licks, the second track has production tones similar to The Black Keys playing in an underwater sound chamber.

With the stage set for an absolute banger, Gramatik slams into the gas pedal for “Bluestep,” launching the listener into warp speed and turning on cruise control for an eight-and-a-half minute soulful foray touching nearly every genre of the last century. You can feel the influences and expressions of Rock, R&B, Jazz, Hip-Hop, and more in this intergalactic road trip.

If you’re looking for the perfect workout track, “Pardon My French” is worth putting on your playlist. The popping, high-energy is sure to help you beat records and keep your heart pounding. It’s the sort of jam that you hear on the dance floor and focus on your own best dance moves, looking for and finding your own internal happiness in the adrenaline-fueled excitement of great music.

On “You Don’t Understand,” we find ourselves in a smoke-filled jazz club, a guitar and piano riffing with each other. Suddenly, we’re kicking out our chairs and throwing them against the walls, as each measure gives a big, strong ninja kick of instrumental funk, soulful vocal samples or a re-emergence of jazz improvisation.

“Obviously,” the eighth track on TAOR, could be equally at home on stage with Chromeo or in the studio with Outkast for Speakerboxx/The Love Below. Featuring both Cherub and Exmag, it’s a vocal-heavy track with memorable lyrics. “Girl it was obvious that I wanted more than a kiss,” sings Cherub, “Those eyes, those lips, those hips/Now shake your ass to this.”

The following track, “Control Room Before You,” featuring ILLUMNTR, starts with a keyboard vamp thick with reverb, before falling dramatically into pulsating synth leads. Then, before settling in too comfortably within an all-digital dubstep landscape, sharp telecaster twangs solo note-for-note alongside the wobbling bass line.

This kind of production highlights an intelligent songwriting collaboration for Team Gramatik that transcends tour buses, hotel rooms, and festival green rooms around the world. The BitTorrent release includes two music videos that transport the viewer into those sessions, melding live sets with recording sessions in a whirlwind tour schedule full of beautiful women, picturesque landscapes, and the adoring love of throngs of revelers.

It’s obvious that The Age of Reason is a big statement for Gramatik. Many of his releases have been self-limiting in genre-focused productions, keying in on hip-hop beats or breakbeats or the like. TAOR takes a sledgehammer to the walls, seamlessly crossing the barriers of the meta-conversation around modern musical styles.

Will Gramatik let off the gas in 2014? He seems to have an endless supply of funky space fuel in his fingertips. If he does tap the brakes, it’ll probably just be to squeeze in a longer bridge or mind-bending drop.

The Age of Reason BitTorrent Bundle

Lost in Sound Interview with Gramatik (2012)

Wesley Wolfbear Pinkham is a California native and a graduate of the UCLA Department of World Arts and Cultures. Currently residing in Asheville, NC, he covers festival culture from the inside-out, capturing transformation and momentum with a critical but loving eye.