Most people refer to Bogtrotter’s music as ‘swampy’; appropriately so, if he gallops through the muck like his name claims. I hear something more abstract though: the successful attempt at creating a piece of truly psychedelic audio that is constantly morphing and changing through time. Bogtrotter’s sound is a complex sculpture of professional disorientation, flooding your eardrums with endless undulating vocal synths that span a range of textures from warm to scratchy to buzzy to melty to chirpy in an intentional cacophony of bubbling audio characters…before dropping it all in tiny moments of silence or carrying it away in a downward spiral reminiscent of flushing a cosmic toilet.

Many of the intros to his songs, such as the track “Cephalopod Shuffle” from his Catawompus EP, are atonal (perhaps transtonal?), making them an interesting tool to blend into for any DJ as you can fall into them from any key. If a villager from Victorian-era England heard these sounds from over a hilltop (not to mention the lightshow), they’d think they’d stumbled upon a tribe of trolls performing some sort of unholy ritual. Fortunately, it’s the 21st century, and that’s the kind of thing I can dance to.

The EP kicks off with its title track, ‘Dark Matter’, my favorite on the EP. Those church bells just fackin’ work, representing (to me) the last bit of recognizable reality you’re subject to before being flung through the wormhole. On small-scales, this track may seem chaotic with its rapid-fire glitches, disorienting low-frequency warbles and chirping spiral staircases of pitch, but its structure is actually quite deliberate and observable when you focus on the larger cycles. As the track progresses, the layers just keep building and becoming more and more relentless as priorly established. Expected spaces of silence get written over with new additions to the freakish spiral of bouncing squish-bots and endlessly rising pitch-loops. A great blend of simple and complex, expected and unexpected. This song also incorporates one of my favorite synthetic instruments I’ve heard in any recent electronic song; I bet you can guess which one.

“Cerberus” is a percussionist’s wet nightmare (I mean that in the best way…what, you guys never get those?). Signature vocalized morphing textures fly out the speakers at 32nd (and I think some 64th) note intervals all over the place, punctuated by a mischievous, off-kilter bassline and drum combo. The background of this song has impressive detail, some layers hearable only to this listener after multiple listenings, just licking the edges of your hearing. Despite the details though, I don’t find this song as strong as the one preceding it. It’s cool, but it just doesn’t have that lasting musical impact inside of others on the EP.

“SkairHaap” is another highlight for me. I really enjoy how even after a few listens, the intro still disorients me to the point where my only correct prediction of what part I’m at is the very end of the build right before the drop. The way the song switches rapidly from squishy textures to beeps that could be a part of a future phone’s UI, or from staccato to flow is really pleasing to the ears. Curtis has a motif of using rapid-fire kicks to lead into preceding sections, and the way he uses that here is very cool. Also of note is the scratchy synth that comes in halfway through, playing call-and-response with itself; very reminiscent of Tipper’s infamous ‘laughing’ synth from his track “Spunion.” I can imagine some sort of ancient supercomputer rebooting after a millenia of sleep mode, to provide power for an equally ancient and damaged robot factory.

“Reptiles” and “Ghoul Train” are both dizzying displays of densely layered cyber-organic-troni-glitch. I knew “Ghoul Train” would be trouble from the start. Nothing with this kind of melody can be anything short of madness. This track in particular give me my previously mentioned visions of troll rituals in the woods of England… the perfect song to put on at your Ghostbusters-themed mushroom tea ceremony.

“Reptiles” starts out with another classically immense Bogtrotter build, with both a rising melody and a seemingly infinitely rising and morphing texture climbing towards the familiar yet foreign synchronicity of bar 32 that we all know and love. The key change is a welcome surprise. The ending feels like the track is actually falling apart, struggling to keep its own structure stabilized in complete contrast to the assertive ascension of the beginning. I have one criticism however: I find this song to ultimately have the same effect that “Cerberus” has on me, where I can’t really remember too much of it until I listen to it over and over for this review; they’re both impressive engineering, but not very musically memorable. By contrast, I was hooked on “Dark Matter” the first time I heard it, and WANTED to hear it over and over again. 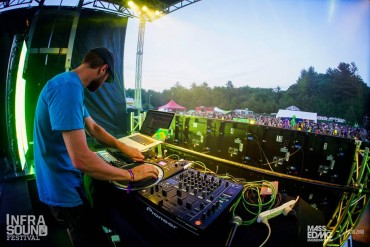 Overall, I find the Bogtrotter project to be an extremely interesting foray into the possibilities of electronic music, utilizing techniques of dynamic control and musical composition that are only possible with the conceptual capabilities of modern digital music creation. Many listeners will hear a lot of sonic textural parallels to Dave Tipper’s 2008 album Wobble Factor, but Bogtrotter’s overall style of disorienting groove is entirely his own. Classically speaking, pitch has been the easiest anchor for a listener to grab ahold of in their mind in any given piece of music, and the way that Curtis flies through pitch in a lot of his work throws the listener into a musical moment largely dominated by rhythm and abstraction. The music world has long held pitch as the most important part of a song, and widely considers it to be the primary indicator of emotion. Bogtrotter uses this expectation and completely turns it on its head.

Almost every element in his songs is constantly shifting and changing, beyond keeping certain drum and percussion patterns; thus, any repetitions are in and of themselves a break from the overall pattern of change, and that’s impressive for any artist in any genre. There is a wonderful balance of expectations vs. subversions in every one of his tracks that I’ve heard thus far. Unlike many producers tend to do, each song evolves throughout its entire length via small and subtle glitches to totally new and large one-time events, rather than merely copy-pasting one complicated section wholly unchanged into the 2nd drop.

There is so much information in any one of these songs that keeping track and remembering of every layer after just one listen is, shall we say, a challenge. The result is a raw yet complex concoction of sound that will surely freak out a lot of people and make them question what exactly it is that they just heard. There is no mistaking a Bogtrotter song for anything other than what it is. I suspect this EP will be heard across many a dance-floor this Halloween…