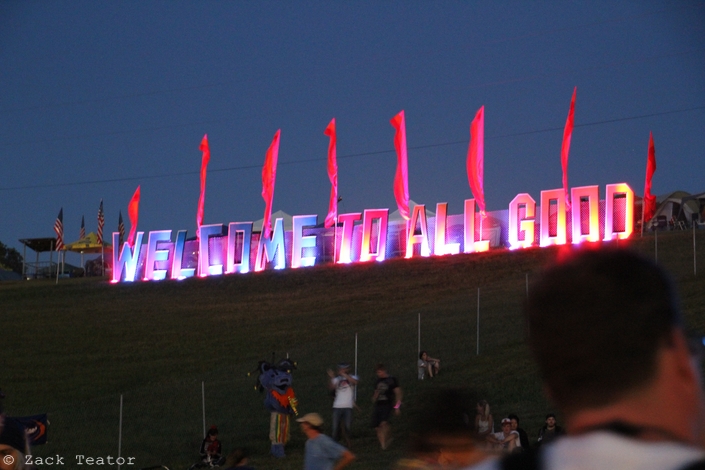 Year after year it seems like our festival scene is growing exponentially. Huge pop acts, big time corporate sponsorship, RFID wristbands, you name it, large-scale festival producers are finding more ways to capitalize on bringing people together for live music and art. It became evident to me this year that All Good Festival, celebrating its 15th anniversary, has found a way to begin expansion into a large-scale festival while staying true to its roots and maintaining their focus on the one thing that counts, the fans. In staying true, All Good has made countless artists into repeat performers, all of which rattled off the number of years they’d been back on that stage like a badge of honor.

It’s not just the artists though, walking through the campsites and meeting neighbors, it’s easy to tell the 15 year old festival is a mainstay in many of the attendees lives. What really holds All Good together is the diversity of its performers, fans, and staff. Whether its jamtronica, folk, funk, electronic, rock, reggae, hip-hop, bluegrass, or just plain undefinable music that gets you singing and dancing, you can find it at All Good, naturally turning the most unlikely of campsite neighbors into lifelong friends by the end of the weekend. Although All Good makes a point of not overlapping sets of music, I still must do my best to highlight what I was fortunate enough to see over the weekend. 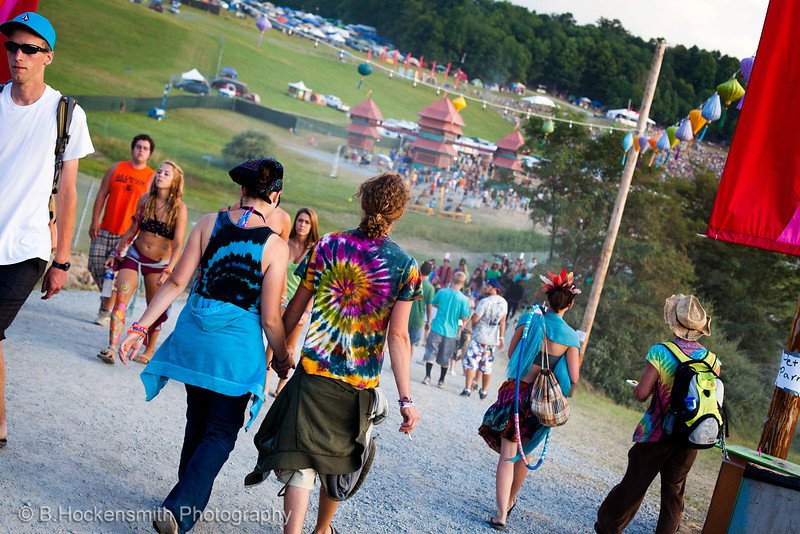 I arrived to All Good mid-Thursday morning after driving through the night from Boston and strategically navigating I-68 through Maryland into West Virginia with my hands at 10 and 2, slightly behind the early rush to get in, only to find that the line was fairly reasonable and moving quickly, much to my surprise. After setting up camp towards the back of shakedown near the psychedelic ferris wheel, I made friends with my neighbors over a water-filtered device and properly began my exploration. Within the first hour or two of exploring, it was obvious how much time and resources were put into making the guests feel accommodated and tastefully creating an atmosphere through decoration. None the less, this is not the first year I’ve thought this while arriving on Marvin’s Mountaintop, but indeed the first year the crowd seemed overwhelmingly large even for the optional Thursday performances.

I wandered for a bit and linked up with some good friends, eventually making our way down to the main stage for Beats Antique, who set the nighttime mood and played an energetic set for the Thursday arrivers as my friends and I watched the top-notch fire dancers in the back of the crowd with mesmerized looks on our faces. We took a much needed break at the conveniently located volunteer campsite and then scurried back down the chinese lantern adorned hill, past the frog pong and giant illuminated Buddha statue to the main stage for STS9.

It had been a while since I fully enjoyed a Tribe show and also a while since I had seen them outdoors at a festival, but they were clearly feeding off the lunar energy during this set as the gigantic, nearly-full moon sat just above the hill behind the massive crowd. Sound Tribe opened with Circus, my personal favorite, instantly bringing me back to their Rothbury ’09 set, only this time they played a longer, more thought out version of the song. Finally I had once again seen the energetic, musically charged set I was looking for out of Sound Tribe after what seemed like years of them falling short of my expectations, undeniably bringing their A-game and closing off Thursday night in style. 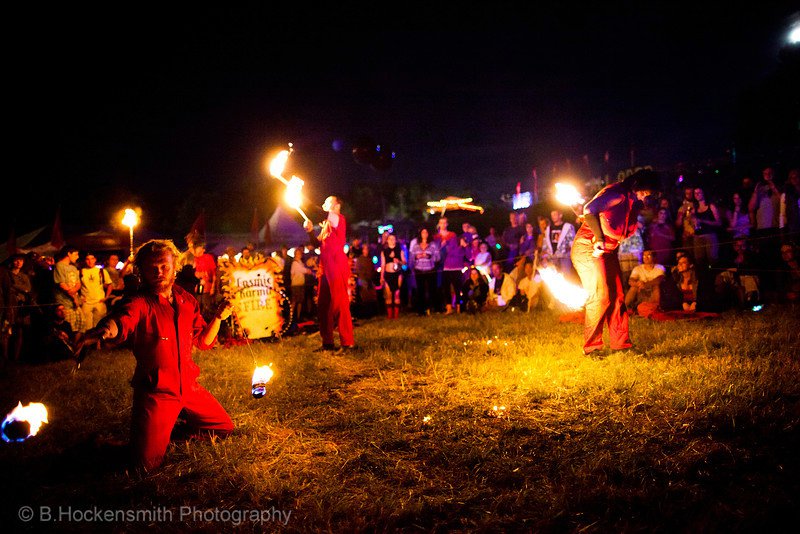 Friday was sweltering hot but it didn’t seem to hold anyone back. The daytime lineup spanned all different genres, enticing ragers and families alike to the side-by-side main stages (one stage was slightly smaller than the other). As I baked in the West Virginia sun, the Infamous Stringdusters got my day started off right with some funky bluegrass, leading into That 1 Guy, who played maybe the most unique instrument I’ve ever seen, moving the crowd to his own personal brand of music. I relaxed in the sun some more and got down to Galactic>Everyone Orchestra>Keller. The Everyone Orchestra is one of two collaborative jam sessions (the Rex Jam being the other) that really make All Good special, bringing together an eclectic group of musicians from various bands to showcase what they can do when put together on stage.

I ventured through the outstanding vendor tents for a couple hours and took a break to sauce for a bit, heading back down to the main stage just in time for the ever-enjoyable Toubab Krewe, who got the crowd loosened up before Furthur was set to take the stage. Although Phil and Bobby seemingly may have reached the end of their touring days, there was no shortage of quality song selections and positive atmosphere during their 2-set performance, highlighted in my opinion by Big River, a slow version of Speedway Boogie, China Cat>Rider, Terrapin Suite (second year in a row they played the suite at All Good), and GDTRFB>We Bid You Goodnight.

As a crowd of glow stick adorned noobs rushed down to the main stage, Big Gigantic followed up with a lively performance, dropping their new hip-hop remixes to get the crowd going even more. As it became hard to find dancing room for those not perched on the hill watching the music, I retreated to my campsite to call it a night, not before rightfully enjoying a Jerry Roll and a conversation with the famous Jerry Roll guy. 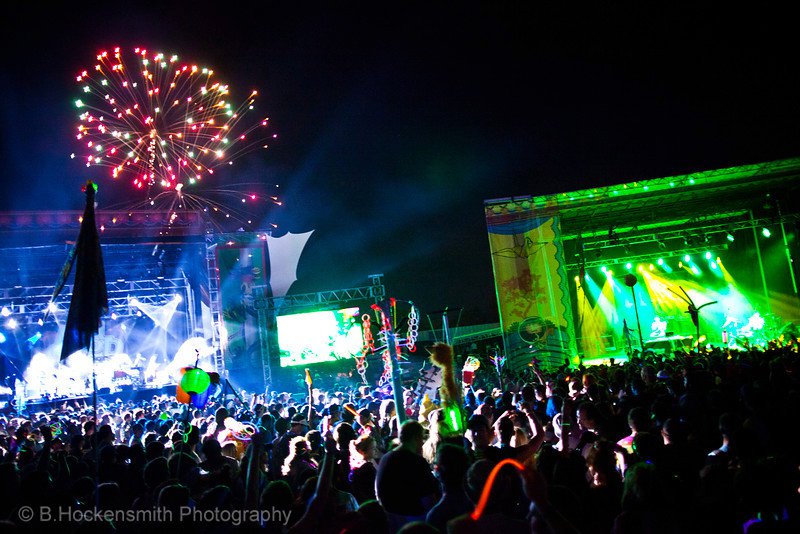 Saturday seemed almost equally as hot so I decided to take it easy during the earlier part of the day, socializing in the shade with my neighbors and friends and eventually made it down to the stage as the Rex Jam was occurring, catching the tail end of that into an outstanding set by Yonder Mountain String Band. Although the sunset slot for Yonder brought the all-smiles crowd together, I maybe enjoyed their late night set last year a little more for its nighttime bluegrass vibe, none the less I was once again impressed this year by their ability to generate a cloud of dust above the crowd from the shuffled bare feet of those breaking out their bluegrass jig. I hung around by the stage for a bit and caught some of Orgone and Moe. who both seemed to have the vibe of the crowd locked down and kept things moving.

After a short nap and a tad bit of preparation at the campsite, I found my spot for Primus near one of the gigantic speaker towers used to blast the music from the main stages up the hill so everyone could hear well. It was my first time seeing Primus after years of anticipation and I was overcome with body energy and sheer appreciation for their music with each and every song. I found it hard to imagine that people there would be visibly scared of the music and the crowd but I definitely noticed some people in search of sanity and calmness, two things which were ever so fleeting while Primus rocked the stage, backdropped by two gigantic spacemen with visualizer screens as faces. This band truly pushes the definition of psychedelic rock to a boundary purely their own.

I’m no expert but a good friend who is cited his highlights as Tommy The Cat and Duchess and the Proverbial Mind Spread. Karl Denson’s Tiny Universe followed up with a spacy, jammy set that kept the mood alive perfectly as the production team deconstructed Primus’ spacemen and constructed Pretty Lights’ city-scape of light towers. Once again it seemed a wave of noobs rushed to the stage with an incredible amount of glow toys, which notably look not nearly as cool on the younger EDM fan than the older bluegrass fan.

Pretty Lights brought the rage party in full force, seemingly playing through his entire repertoire of of hit songs as per usual, even dropping a remix of Country Roads by John Denver that he specially cooked up for the festival. While his soulful electro-hip-hop provided an upbeat late night closer, Derek Vincent Smith should refrain from intoxicated banter about the fine line between mash-up artists and producers and his Facebook page in the future. Regardless, his progression to playing bigger and bigger shows is impressive, not to mention his mesmerizing stage setup greatly boosts the entertainment value.

Sunday was more low key, with less scheduled acts and the music ending at 7pm, giving fans the option of beating the traffic to get out and making it home that night. I unfortunately didn’t get ready in time to see Greensky Bluegrass but got to see The Bridge who threw down their Baltimore inspired funky jam-rock with quality beat boxing thrown into the mix, definitely a band to see if you haven’t already.

Dark Star Orchestra closed the festival appropriately, playing a seamless second set, but couldn’t seem to recapture the vibe in the air that Furthur produced, I’m sure mostly due to the draining energy of those completing their 4th day of raging in the West Virginia sun. All in all I thoroughly enjoyed every day of music, met overly friendly neighbors, got a tan, danced with my shoes off, and laughed until my face hurt, completing my quota of All Good perfection and marking the 15th anniversary a total success. The festival’s ability to bring people from all fringes of the music scene together and peacefully control crowds of people trying to have as much fun as possible is due to the hard work of one of the best production crews and volunteer staffs in the country. All Good has a little something for everyone and a lot of everything for the open-minded. 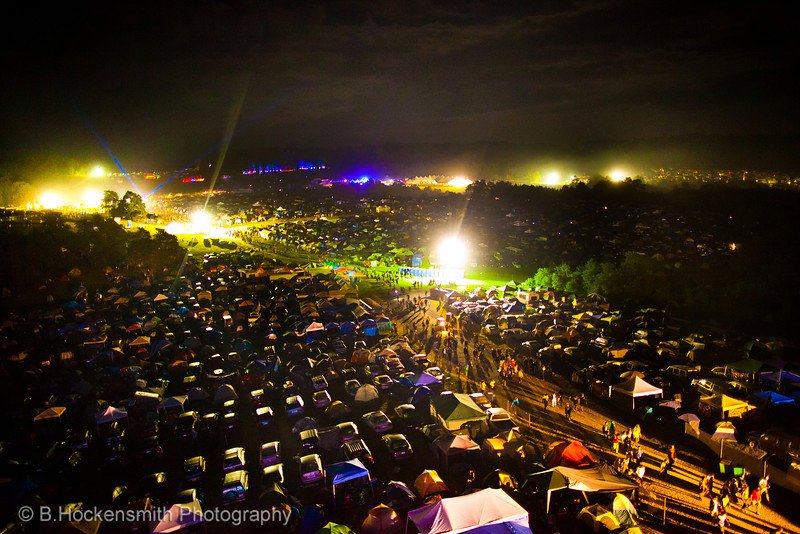