It seems like a simple enough formula: Find a beautiful natural setting, bring some speakers and artists, and have a great party.. Anyone who knows anything about festivals knows there’s nothing simple about making this happen however. There are so many variables and societal restrictions, its a rare and special moment when it all comes together just right, as we experienced at The Big Up 2011. From the historic and picturesque setting of Sunnyview Farm, to the stellar lineup and tight production, the small festival in its second year stood out as the best of the season in the Northeast.

It was rich in local artwork, with half of the camping and a stage tucked into the decorated forest. The whole venue was well designed and comfortable, the staff friendly and the crowd healthy and enthusiastic, elements that should be commonplace but are not. It was just big enough to deliver spectacle, yet small enough to find intimate performances and your friends. Everyone from hosts Higher Organix to headliner Tipper to talented up-and-comers like Zoogma and Dopapod threw down in a big way, giving us a balance of bands playing electronica, funk and folk, as well as producers spinning original beats. Shireworks Productions has done it again and established themselves in a scene that so desperately needed a more laid-back and conscious destination that still promised a party. Everyone left with a feeling of family and achievement for having participated, and there is great promise for the future.

TBU also saw a new generation stepping up to run things. Suddenly it was our friends putting the festival together, up on stage and doing the press. Its beautiful to watch everyone come into their own and develop their talents, each bringing something unique and essential to the mix. Check out our girls Kristi Ketting, Sheauwei Pidd and Lauren Sullivan hooping with EOTO! Part 1 here

EOTO’s set had great moments of course, but really lost me in the second half with all of the pop vocals Jason kept whipping out – “How Low Can You Go” and “Shake Ya Rump” in a chipmunk autotune is not great music. Once or twice would have been cute and tolerable, but he busted into six or seven of these bizarre “samples” and a very white rap that made us cringe. His stutter effect on the drums is also overused, making the drops into hard dubstep beats rough and predictable. Compared to other shows and eras of their improv, I found it hard to stay engaged and get down, feeling like they were trapped in a cycle of pop lyrics and mundane dubstep. Their most interesting moments were when they branched out, using Michael‘s guitar and strings to create melodic grooves that called on multiple styles and influences (like in the video above). They’re 40 year old guys up there with a lot of energy and ideas, but it really seemed like they were trying too hard to be hip and current and ended up seeming the opposite.

Big Gigantic had bombastic energy and blew things up on the Main Stage Friday night.. The set was basically the same one from Vibes and All Good, but its great and got the party started. Dominic seems to be trying to tap into some mainstream love as well, remixing “Black and Yellow” and other popular Hip Hop tracks. He busted out a new original that was one of his best yet and kicked off the weekend with brutal beats and soulful saxophone. Hooray for dancing on grass!

Ott held it down later that night in the barn, delivering his usual dub wizardry in a short but sweet set composed of his best old and new material. Stay tuned for the interview we snagged with him earlier that day.. 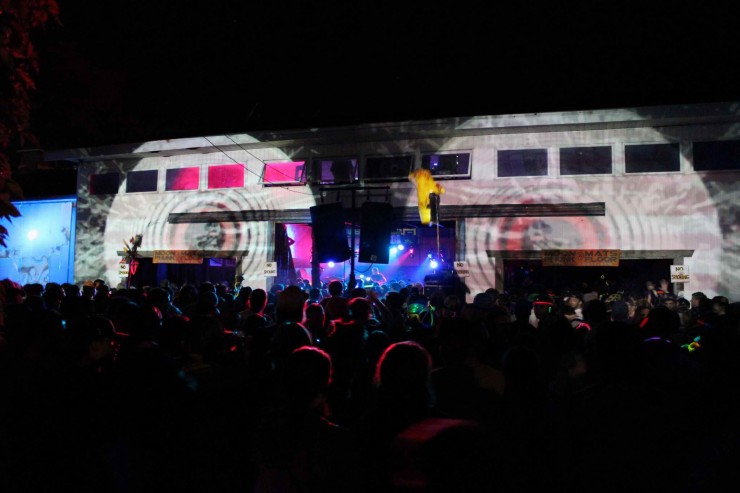 The Late Night barn is cool, but obviously needs to be expanded in a big way. I hope the whole fest doesn’t grow too much though, that they cap it before it blows up and keep it manageable. Props to all the artists that painted and contributed and to our girls who created the art lounges, including but not limited to Dani Lynn, EB Miller and Allie Olsen. Let’s do more live art, bigger, everywhere you look, more shit in the woods, light em up! There is endless potential…

Rogue Chimp tore up the woods stage after the OTT set. It was nice to see them return to the Big Up and play once again.

Part 2 can be found here!

Higher Organix played multiple sets, showing their ability to hang with anyone and bring a variety of styles from funk to folk to jamband shredding. Check out some of their Mainstage Set:

Zoogma really impressed me, they are a tight musical unit that is going to do big things. They create melodic electronic grooves with a hard rock edge, and the crowd was poppin’ even though it was 4am. Dominic Lalli came out for the finale…

Tipper did not disappoint, giving the east coast a dose of his richly textured compositions. I felt it was the best set musically of the three I saw this summer, as he has perfected the transitions and pulled out all the new joints he dropped here and there on the tour. He incorporates influences from classical to swing music, set to brutal breakbeats and warped, alien basslines. For a taste, you can find Part 1 here, or check out Part 2 below.

Artwork was everywhere, and everyone loved it. The sustainability initiatives headed up by our own Eric Giambrone were a great start for a small festival, and included things such as the collection of all food scraps from food vendors to compost on-site, a rideshare on the festival website, free drinking water to minimize plastic bottle use, and the use of local timber for festival props and decorations. But it’s still a young party-oriented crowd on the east coast, and there was quite a bit of trash about at peak times, especially in the woods and barn. The Goddess Realm, where you could make crafts, do yoga, get massages, or just talk with the lovely goddesses that dwelt in the Realm, was a great addition to the never-ending party. We’d love to see the Realm be further developed and expanded, as it offered a much needed reprieve from the often-raucous crowd by the stages. 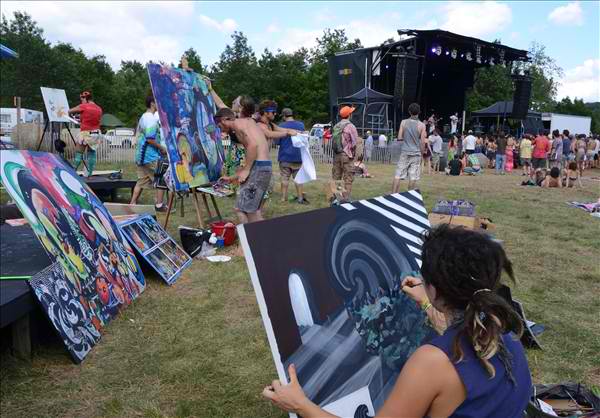 Other stand-out acts included homies Wobblesauce, Supersillyus and lespecial, who brought tons of energy and new material to the stage. Wobblesauce still holds it down as a trio and has great potential to team up with collaborators and guests. The Supersillyus beats off the new album were weird and wild live in the rain; Billy‘s pancake making and throwing have developed into a bizarre accompaniment that adds to the surreal effect of the music and costumes, whipping the crowd into a feeding frenzy. The Polish Ambassador had his moments with a late-night spot Friday night, confirming the talent he showed in his latest realease Future, Sex, Computers.

DJ Foges throws down some GANGSTER dubstep and I personally got down the hardest of the weekend at his set, bouncing off the walls of the art barn, possessed by the empowering energy of his music. It wasn’t all that complex, but it’s hard and evil, just what I needed at the moment to exercise the demons. Papadosio, The Breakfast, Gramatik, Abakus and Consider The Source all gave great performances, exposing their music to a lot of new fans that had never seen them before. 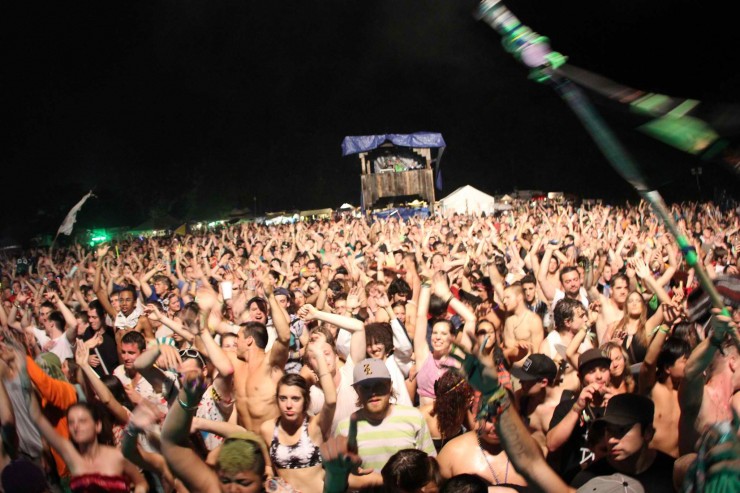 After playing through Saturday night, I came upon the bonfire at dawn, sitting beside it to enjoy a huge steak burrito. This was the second time I encountered Security, and I don’t mean dudes in yellow shirts with walkie talkies. The now legendary Jason Pew donned a blue jumpsuit with “SECURITY” written across the back and proceeded to make everyone around him feel safe, or at least amused with his contagious joy and sparkling kinetic aura. The man was trembling with raw energy, sweating profusely, unable to stop moving, grooving, shaking, rolling, dancing, and re-hydrating! He wielded a massive rage pole, a stick with an umbrella and glowsticks attached to it, and he rode it and carried it like a flagpole as he bounded around the fire to the cheers of all watching.

He was an effervescent sprite, and if the forces of good and evil were lined up for battle Lord of the Rings style, he would lead the charge of elves, dwarves, men, and a few brave hobbits.. charging ahead jubilantly, fearlessly into the fray. He was tireless, as this all went on for hours, well before and after I was there watching. He would periodically yell things out like “I work in a cubicle!” and “I will make you feel safe!” to our delight, but seemed very much in his own bobblehead world. This video captures some of it, but its one of those things you can only really understand if you see them in the places that make them living pieces of art.

This is where it starts on the East Coast, a conscious, aware, respectful, responsible, ragetastic gathering. I don’t wanna see girls getting carried out of that barn, blow sticks and cigarette butts on the ground, or gangsters from God knows where selling God knows what to dumb kids. Lets take ownership of this community, keep the scene clean, protect it like our backyard and make sure it grows right, because it has the potential to be a new kind of tradition we can be proud of.

As many of you know, LostinSound.org and the LIS Soundcloud page have undergone a rehaul…