I asked French composer, Syl Kougaï, known for his on-the-fly performances, to discuss this topic and hopefully bring the lazy use of the term “LIVE” to an end.  Syl has recently uploaded a mix of live recorded remixes with bits from his 2015 release, ΙΧΘΥΣ, which was listed as one of my 25 Stand-Out Psychedelic Bass Releases of 2015.

[Lost In Sound] The mix you originally made for Stalker Radio Show is a live remix of your most recent album, ΙΧΘΥΣ.  The term “live” seems to be used for everything from composing on the spot to playing tracks on Ableton Live as a DJ set.  What makes this set “live”? 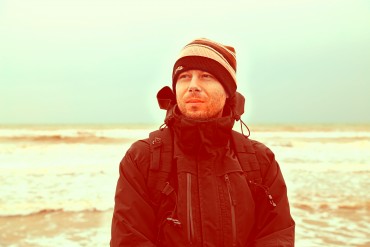 [Syl Kougaï] This is an interesting topic – and extensive, because if you think of a musician who plays identically on his piano the same partition as the day before, his performance will always be considered “live”, without improvisation perhaps, but “live”. It is therefore necessary to narrow the subject to electronic music, but the question still remains complex and sometimes subjective.  For me, a live set of electronic music is the fact of playing, drive, handle and/or improvise music with devices that generate sounds in real time.  There is a grey area with samples of course.  The granular can go in the “sounds generated” category, as well as the use of very short samples to create rhythms or to be rearranged live (real-time sampling, etc.).  However, this excludes the use of long pre-recorded audio files played as is or with only a few effects, and therefore most of the sets based on audio files.

Under this perspective, ΙΧΘΥΣ Transmission is a “live” set created and played from the raw material of ΙΧΘΥΣ  album.  By raw material, I don’t mean the audio files resulting from its recording, but its sounds, its “instruments”.  I composed the album ΙΧΘΥΣ by pushing as far as possible the stage of recording.  I mean that everything remains in the machines, the sounds are generated in real time, their parameters, their modulations, their effects and the information within the sequencers are accessible and adjustable quickly, and all along the process of composition.  It is an articulated mechanism where everything remains in the hands.  It’s important for me to keep this flexibility as long as possible until the recording. First of all, from a methodical point of view it allows me to return permanently to the elements.  But also from a psychological point of view, to keep that feeling that I’m working on living things.  For me, the recorded sounds are dead sounds in a certain way, like memories frozen in pictures.

For ΙΧΘΥΣ Transmission, I rebooted the different instances in my machines,  and juggled with the kits and patterns clusters to merge them into a solid set.  From there, I played and recorded several jams, recorded in multi-track.  I kept the best moments.  When it’s good, there’s usually nothing to edit.

[LIS] What influenced you to learn how to perform live sets?

[SK] The first tracks I composed in my life weren’t supposed to be recorded.  They were ready in my machines to be loaded and played.  That was the purpose.  I remember that when I wanted my friends to listen to my music in my bedroom, I would play live in front of them.  I started like that, composing “flexible” tracks to be played.  It was much later that I began recording and composing for recording.  This is also due to technology I was using at that time, I did not have much choice.  Today the concept of recording is integrated in the software in which you compose the music, it has been there since the beginning and goes with us all along the composition process.  When I started it was at the end of the process.  I first had to understand and know how to use MIDI to run two or three machines together, to plug them with a MIDI sequencer of a computer.  I had to think about the audio signal path and so on.  A lot of tweaking was done by hand, I worked the different parts of my tracks, the changes and transitions manually.  It taught me to work staying close to my feelings, which is a good school I think. 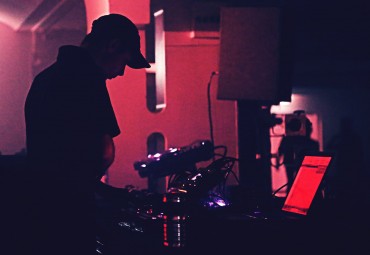 [LIS] What sort of preparations do you make before performing a live set?

[SK] For concerts, I take my set of machines with which I will play down from the rest of my studio and I reconnect separately, to get closer to the conditions of the concert.  Then I play my set and optimize it until it’s right.  I record these repetitions and I listen to them with headphones during my trips when I go to a concert.  I need to stay in contact with the set not to be confused or exceeded by it on the d-day, and it gives me more ideas of how to play.  There are many things to remember.  There are “drawer” sequences everywhere with sounds that will play or be modified if these sequences are deployed.  On some parts, the sequencer of a machine can take control over the one of another machine, or respond to some information.  It requires great concentration because everything is moving. 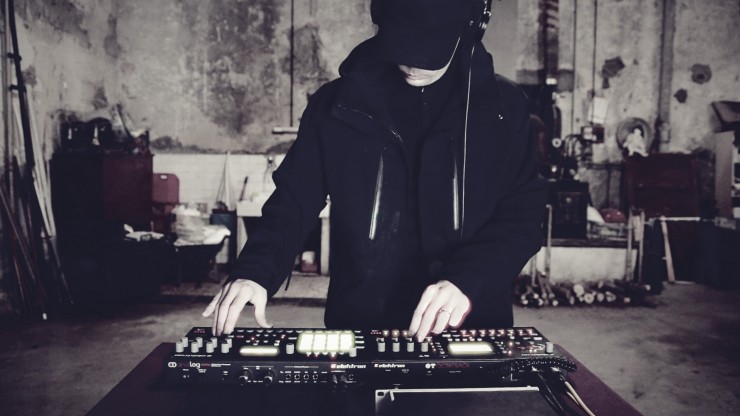 [SK] My current set consists of three Elektron’s boxes, an Octatrack, a Machinedrum and a Monomachine, a computer and its sound card, a small analog mixer that merge each outputs.  This is a small set, but very capable.

[LIS] How much of the set is spontaneous vs thought out? 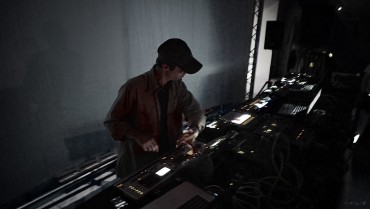 [SK] I thought and built my current set for concerts to be as flexible as possible.  I drive and develop all intuitively and spontaneously.  I am guided by my feelings and by what comes out of the machines, there is interaction between them and me.  They can react in specific ways, but according to the direction in which I take them, lots of unexpected and surprising things happen; and I love that.  My set speaks to me, I listen.  It sends me signs, it tells me when it is time to change the pattern, if you must trigger a particular sequence, it could be a sound that began playing in a strange way that invites me to focus on it and push it into the way it told me, something like this.

[LIS] Any tips on making things easier for yourself to increase ease of flow?

[SK] I think I am not the right person to answer this question.  On the contrary, I like my machines to surprise me and for this I work them to the core.  I make sure that my machines complicate my life, I program them to be temperamental and my challenge is to tame them when they play.

[LIS] Any other sort of advice you may mention to someone curious, but perhaps intimidated by the leap to performing live? 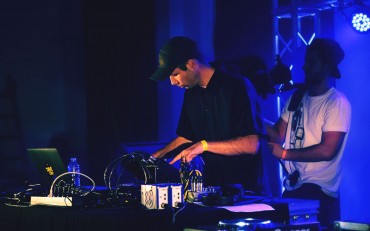 [SK] There are plenty of interesting approaches to explore today, you’ll have to choose one and it will depend on the music you want to play.  We must therefore think about how we want to work before embarking on the preparation of a set.  Start with a minimal set, two machines for example. Work with it until you are comfortable with it and have a musical result that holds up.  Think and compose the music you will play during concerts for concerts.

[LIS] Thank you Syl, for following your passion and producing such beautiful, and truly unique musical pieces of art; and for sharing this insight with us.   Do you have any info about anything in the works for upcoming releases that you would like to share?

[SK] Thank you! And yes, I’m working on something.  It should be out this Spring.  Also, I will publish within the next months a new video live from the studio, it will be the sixth episode of my series named « Twinklings ». 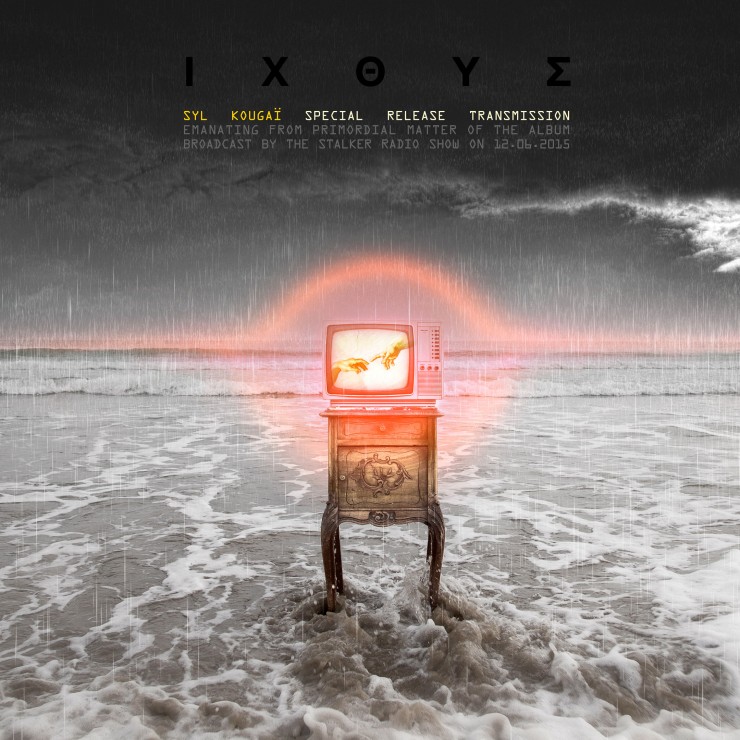 — Get ΙΧΘΥΣ Transmission
Instant high-quality download in MP3, 24-bit FLAC, WAV and more.
— Full Digital Discography (50% OFF)
Instantly get all Syl Kougaï releases including this set and save 50%.
— Membership
Get all the new music Syl Kougaï releases
+ all items from the back-catalog
+ members-only specials