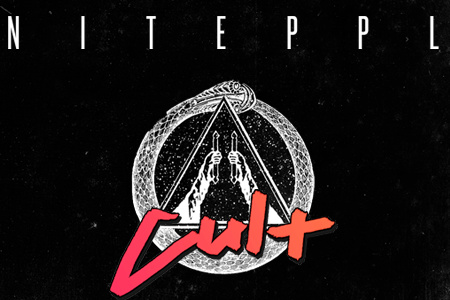 Everyone hopes that their debut album will catch fire and climb the charts. Few get to realize that dream. For Niteppl, also known as Alton San Giovanni, that dream became a reality last week when Temple Music Group dropped his album Cult on Beatport. Since then, the album has taken off and risen through the new release charts on indie/nu disco, breaks and electro-house.

The album is a sort of “disco opera,” best enjoyed in one continuous listen. It starts off gradually with the aptly named “The Show” which sounds as if you’re in the center of some sort of steampunk tribal dance. As the dance climaxes, so does the track, and it dumps you into the banging guitar and synth-laden “Me and You,” which feels as if you’re in an 80’s style cocaine and tulle fueled birthday party. “Transmission” sees you on the floors of Studio 54, doing the hustle and aggressively jutting your pelvis to psychedelic guitar riffs.

“Spacewrock” throws you into another world of funky hip-hop style beats with a retro flair. It’s as if you’re driving in a pimped out Cadillac in Long Beach with a feather in your cap. “Machine,” arguably the dirtiest track on the album, takes you back to the dark, organic sounds of “The Show.” As it builds up, you can clearly see it destroying dance floors.

Combining elements of French nu-rave/disco and something of an almost Daliesque/Spanish impressionistic vision, the appropriately named “Le Noche” is one of the darkest tracks on Cult, equating to the dream, or maybe nightmare, of the album.

Cult brings you deeper and deeper into the realm of dirty electro. You’re no longer on the light and energy filled dancefloor of Studio 54, but at the after-party in an abandoned warehouse on the edge of town. It’s amazing, but there’s an edge to it all.

If you imagine a sort of Justice 2.0, you’re close to what Niteppl is all about, but even that is too simple of a conclusion. On tracks like “Machine” and “Cult” there are touches of Deadmau5 style beats. Niteppl’s debut definitely marks him as a producer to watch.

This would be cool to use as live visuals on stage. Bet you didn’t think…