The Gravity team is a local Aspen production company dedicated to offering Roaring Fork Valley artists, and beyond, an outlet to share and spread various forms of art. Other events Gravity has hosted, that you may have heard of include: “The Super Dope Semi-Secret Dance Party You Can Probably Get Into“,”5Point Film Festival 2015“, and “The White Wolf Party“. The Gravity crew is a band of brothers really. Reuben Sadowsky, Joey Stokes, Eric Allen, James Gorman, and Carl Weiseth of Third Eye Pinecones. All of whom are merry tricksters that always make a space come alive. In Aspen, you may find these gentlemen sending parachuted Ken dolls out of gondola on a snowy day, wearing handle bar mustaches, paragliding, or narrating whatever is happening in a group setting to the the voice of Morgan Freeman. Yes. This energy is a healthy baseline to any production company. Silly. Wild. AND FREE.

Along with these qualities, the Gravity crew is a very dedicated to being a part of the Aspen Valley community by attending Aspen city council meetings that directly effect the local community. From an outside perspective, these gentlemen are setting an example to many other production companies and leaders in the festival community. Reminding us all that we have the power to make change happen outside of out festival culture to spread a healthy and inspiring environment among each other. To truly expand the transformation out of transformational gatherings and into our everyday lives.

For this round at the Bald Eagle Bonanza, there will be familiar faces from previous shows including: Nas-Ja, Elana Meta, The Human Experience, Tha Cat’s Pajamas, GeoDecibel, Dust Drops, Danni G, and Lulu Granji. All of these artists are continuously creating new content to feed their creative flow and those they entertain. The rising tide of many new artists to Gravity’s lineup will be pulling in SaQi, kLL sMTH, YuYu, Christina Angelina, Pickles, Rooted Rhythms, Corey Summers Designs, Mikhal, Shamanic Technology, Lily Fangz, and Claire Daniel Thompson. 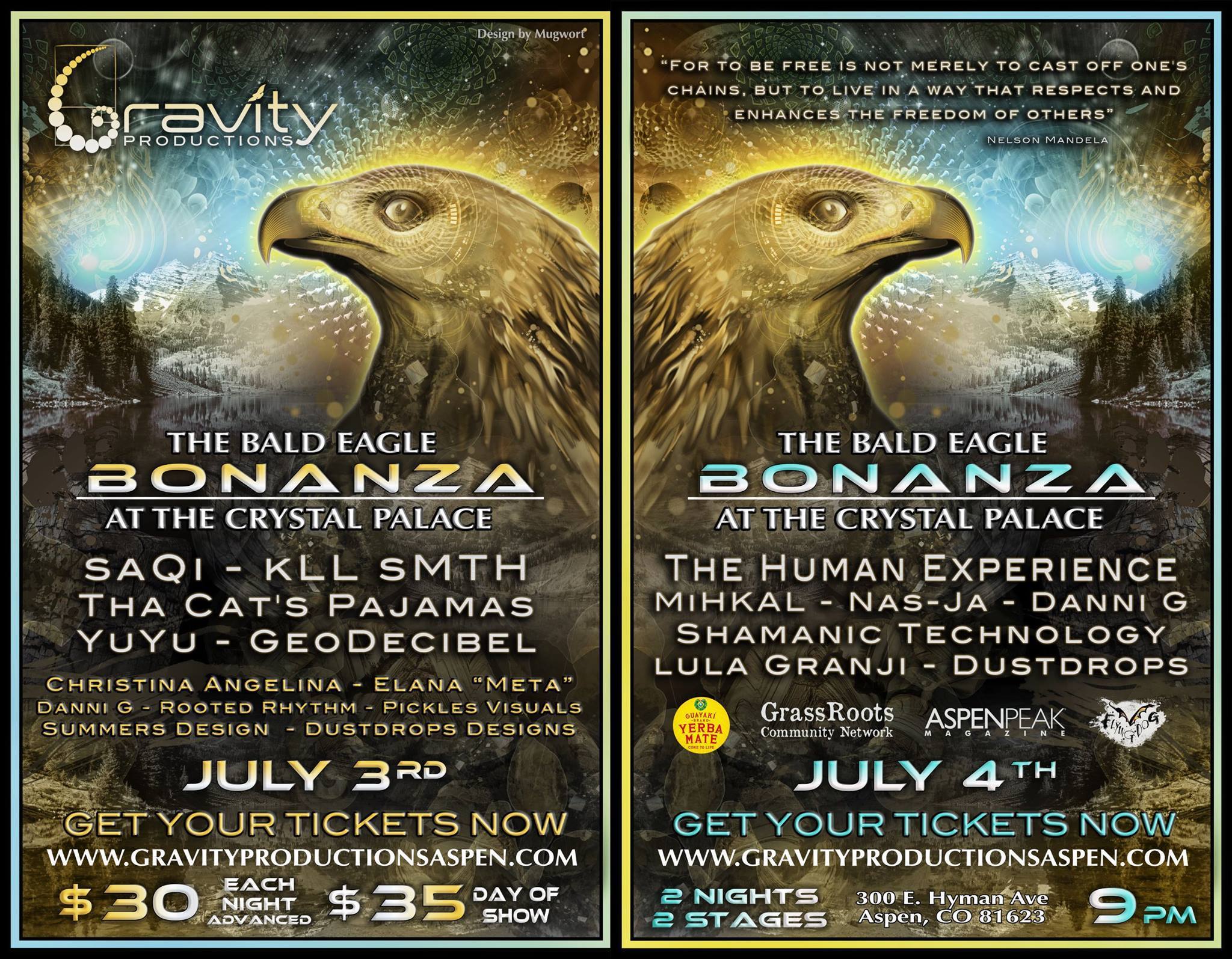 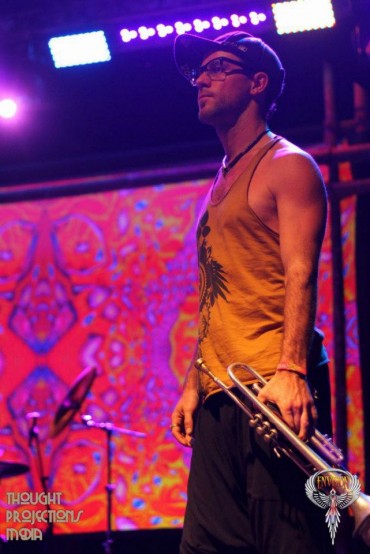 The mad-musical scientist known as saQi is a classically trained composer, producer and trumpet player. Drawing his name from the Sufi title for a mystic muse, saQi creates deep and funky dance floor jams that rock the party yet still maintain a grace and musical sophistication to engage the listener. saQi is a member of the illustrious Polish Ambassador’s new label Jumpsuit Records.

“The Well has become a recurring theme in my life. To me it represents the place inside of us where our deepest creativity, passion, courage, nourishment and love reside. Finding this place and keeping it full and flourishing is a life-long challenge. The music continues to show me such things and serves as a teacher on my journey to understand myself and the world.

I want to thank all the artists, friends and family who made this album possible. Working with others to create something that people can enjoy, dance, sing, heal, and get down to is a great joy.

The Well is another release brought to by the musical collective and label known as Jumpsuit Records. Our crew is an evolving fellowship with a purpose to collaborate, perform, tour, cross-promote, work, play and create social change. Please check out the other Jumpsuit artists and stay tuned for more releases, live shows, tours and action days.”— Luke Solman (saQi) 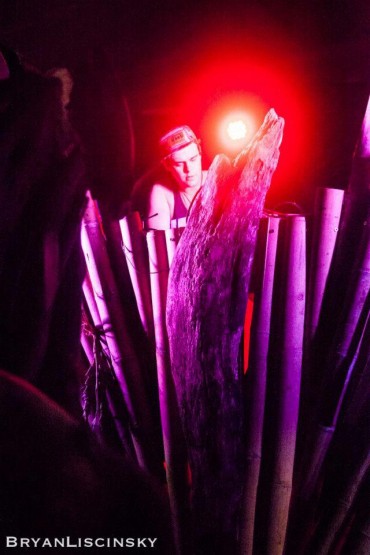 “My sole mission in life is to keep your ears listening, your brain thinking, your hearts radiating, and most of all, your booty shakin.”- kLL sMTH 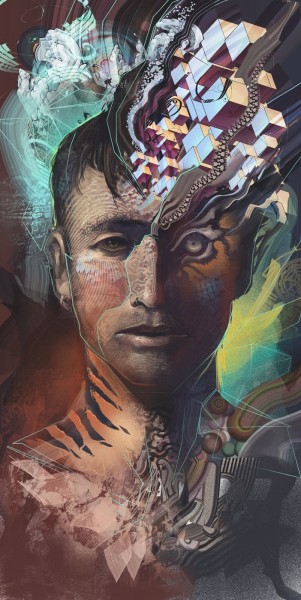 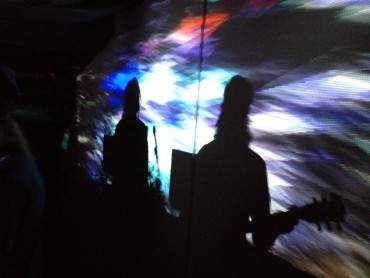 “Yuyu is a collab​oration between Colorado artists Cualli and Omega. They each bring aspects of their signature sounds, but this duo is much greater than the sum of its parts. Lush soundscapes and intricate melodies blend with ultra funky basslines and bangin percussion, creating a sound that defies catego​rizati​on, but will surely rock any dancefloor. Utilizing their skills as both live musicians and electronic producers, Yuyu shows combine the best of the two worlds: meticu​lously crafted composition and production, plus masterful live instru​mentat​ion.” — Aaron Holsapple and Chris Lawrie 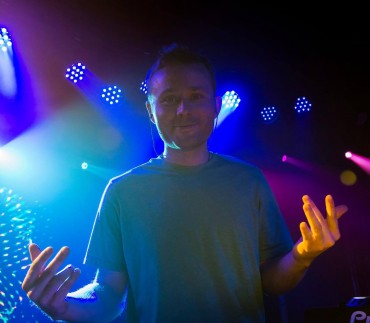 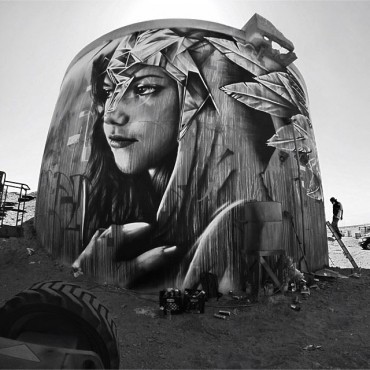 “Christina Angelina is a Venice-based fine artist, street artist, photographer, producer and gallerist. When she isn’t bound by professional commitments or finishing a painting in her studio, you can find her wheat-pasting her drawings to the walls. As a painter, Angelina prefers to work with oil, but her love for wheat-pasting has slowly entered her studio work, too.”–Widewalls.com 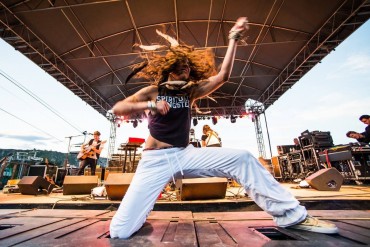 “Elana Meta is a woman on a mission. A true powerhouse of love, light, and mind-blowing movement, Elana Meta provides you with a platform –the Meta Method– to put your human spirit in motion. The ultimate goal of the Meta Method is to bring about the change you wish to see in the world beginning with yourself.

With a BA in Dance from Hunter College & a strong foundation from The Hip-Hop Dance Conservatory, Elana Meta brings hip-hop to the hippies. By fusing together her urban moves with her earthy views, Elana Meta is deeply committed to inviting you to strip away what’s known and delve into the world with passion and action.

Elana Meta has embodied this belief by recently leading flashmobs in cities around the world as a means to bring people together to create social change. Elana Meta looks forward to continue forming an army of artistic soldiers by her side. Her goal in 2015 is to take the DANCE OUT IN LOVE flashmobs to ten cities.

When Elana Meta is not teaching social change through her dance moves, she’s also a performer, actor, and entrepreneur. In 2011 she founded NYC’s “The nerd-E Crew” and developed the workshop, “Breaking WaVeS.” Elana has performed at the legendary New York City venue Lincoln Center and has performed alongside artists such as Beyonce, Nahko and Medicine for the People, The Polish Ambassador, and Hoodie Allen.

Elana has been fortunate enough to have taught and performed at Burning Man, Red Rock Ampitheatre, Envision Festival, Lightning in a Bottle, private events, major theatrical productions and concerts, among others. You can spot Elana Meta in music videos and commercials such as Nike, Xbox, & Verizon Wireless, and can also find her as a recurring actor on the ABC Television show “What Would You Do?”

Elana Meta is currently living in Big Sur, California, and can be found dancing with each sunset. She’s looking forward to heading on tour with Wanderlust this June, where she’ll be teaching her META METHOD to her freedom lovers across the globe.”—Elanameta.com 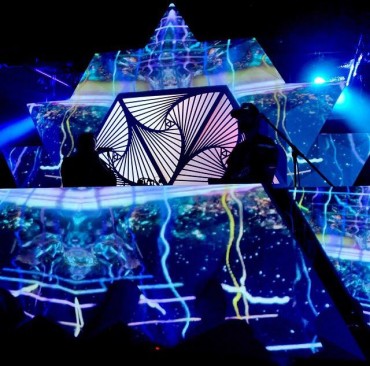 “Jordan “Pickles” Leonard’s most recent incarnation is as an audio-visualist production designer and visual projection performer. Based out of Denver Colorado, Pickle’s artistic branches root in tattooing. Years of influence from Burning Man culture and transformational festivals, has moved Pickles in the direction of developing art on an immersive scale with the intention to inspire and connect with the love tribe on a deeper level. He has been formulating a variety of installments and performances including collaborations with Annie Stardust, Pan Astral, Knew Conscious Art Gallery, and Fractal Planet at Burning Man 2013. Recently, Pickles has illuminated the stage and performance environment with artists such as ESKMO, Andreilien, and Dirtwire. 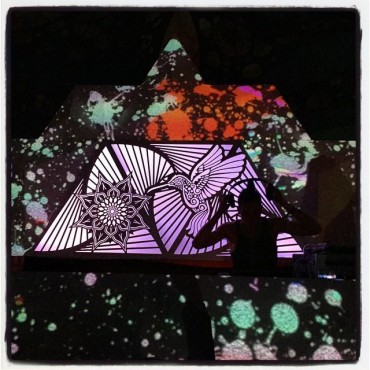 Corey Summer’s is a designer for jewelry and stages. He is the crafty craftsman who built The Hummingbird Stage for Sonic Bloom Festival as well the tree stage for Gravity Productions, which you will for at the shows on July 3rd and 4th. Corey is also bringing triangle wooden carved lamps he recently created for the Bald Eagle Bonanza. 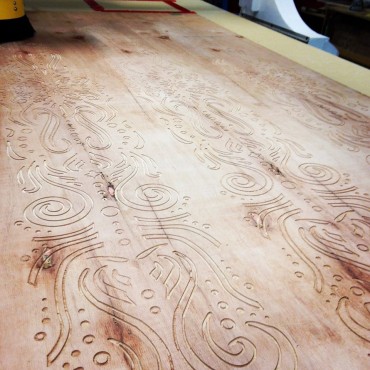 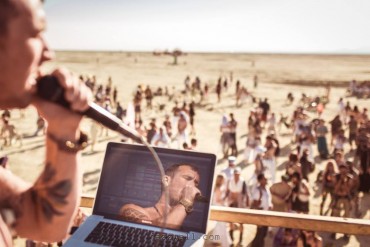 “David is constantly pushing the boundaries of live electronic music. Playing, composing, and conducting his own electronic symphony live on stage, his performances are brimming and layered with human emotion, world exploration, and sacred sounds. Whether performing by himself, or with a live band, “The Human Experience” always delivers an emotionally charged show.

“The Human Experience” aims to cross cultural barriers through music. David has collaborated with artists all over the world including Ignacio Perez (Buena Vista Social Club), William Close (The Earth Harp), Random Rab, Govinda, Amae Love, Rising Appalachia, and many others.

Since his debut album “Inaudible Sounds” in 2010 , he has released four other albums in the last two years and has four new projects planned for release in 2013. Each song is a sonic journey; interweaving psychedelic layers of melody and harmony with organic grooves and international vibes.

Composing and performing live with the Audio/Visual/Dance projects “Phadroid, Andrew and Phaedra Jone” (s), “Quixotic”, “Lucent Dossier”, and “Seraphim” David is expanding his sounds into the mixed media world.

Since 2010, David has performed all over the world sharing the stage with renowned artists such as, Thievery Corporation, Bonobo, Tipper, Random Rab, Emancipator, Bluetech, Kalya Scintilla, and Kaminanda.

Over the last three years he has toured in England, Portugal, Germany, Russia, Israel, Costa Rica, Mexico, Guatemala, Canada, and all over the United States at a variety of events including festivals like Boom, Burning Man, Lightning in a Bottle, Satya, Symbiosis, and Envision.

David is consistently redefining himself as an artist, performer, and human being. Moving and traveling around the world, meeting people from all walks of life and realms of consciousness, he is continually learning, growing, and sharing inspiration with those around him.”—Humanexperiencecreations.com 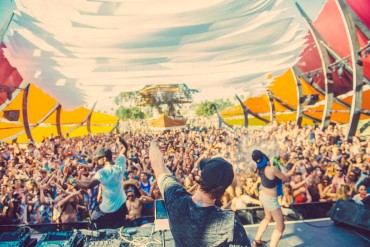 Also known as Michael Anderson Lapp, MihKAL is producer based out of Santa Cruz California where he mixes hip-hop induced base music. 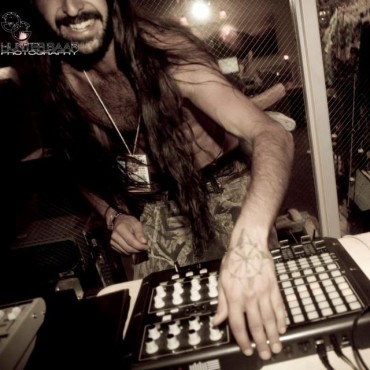 Addam Pratt is also known as Nas-Ja. He is a gypsy man, yet Carbondale local, who spreads his love for downtempo/mid-tempo/organic glitch. Throughout Addam’s years of producing music, his style has change tremendously. Which offers his listeners a wide range of sound. He is a ramblin’ man and continues to evolve within his sound as he does as a human being. Below, is a collaboration between Nas-Ja and performance artist KArina Baxter. 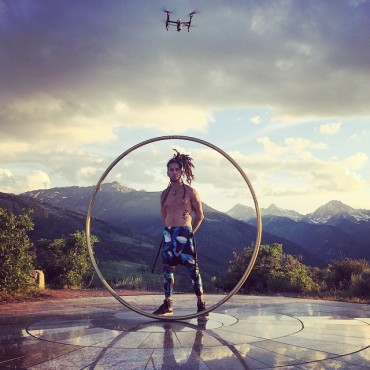 Danni G was born in Brazil, but is currently based out of LA where he is focusing on expanding his craft. Danni G is a circus performer and DJ who is currently touring with the Wanderlust Festival. He began his career as a circus performer in Cirque De Soleil. As his career continued, Danni G found more creative bliss in the expansion of his personal creative ventures through branching out of Cirque De Soleil. Danni G’s main circus act is spinning in a round steel wheel (Cry Wheel). He has performed on many stages with acts such as Lucent Dossier. 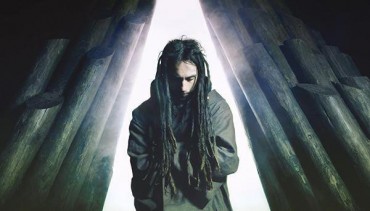 “Shamanic Technology is a communication in contemporary bass culture. Taking elements from the world of Neuro, Glitch, Breakbeat and Hip Hop; this is bassmusic that crosses genres and spans multiple tempos, where seamless elements combine across a backdrop of old-skool IDM nostalgia, dark basslines and glitch innovation. Shamanic Technology is an ever-evolving exploration in sound experimentation. A collision of dynamic sound design, beat science and hypnotic melody.”—The Shaman himself 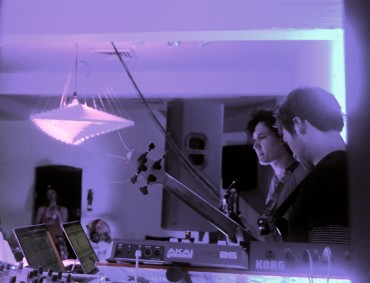 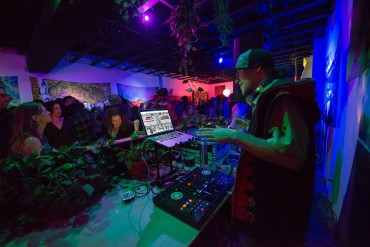 Josh Paigen, also know an DustDrops produces a blend of, “funky-crunchy electronic dance music mixed with a grin and served with a double splash of psychedelic bass.” He is currently based out of Carbondale, Colorado where he too is often seen playing on First Friday in Carbondale.

Although I was hesitant at first, July 4th weekend in Rothbury, MI proved to be…