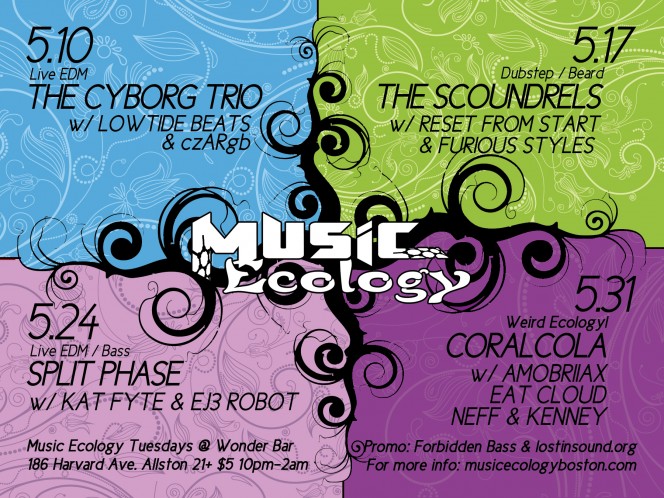 –The Cyborg Trio–
The innovative Cyborg Trio are known for their dynamic, psychedelic improvisation and carefully crafted beats. Eric, Sammy and Tim released their fully improvised “jam” album in early 2009 and since then have been getting more exposure in both the local and national scenes. Their tight, trance-inducing tunes are reminiscent of a DJ; you’ll have to keep reminding yourself that these guys are playing live instruments. They bring the crowd through a journey, offering ups and very relieving downs as the beat drops and groove waves travel through the room, filling the venue with good vibes. Self-produced and live, the new CD gives you a taste of what their live show will entail. Buy their CD Broken Beats, Vol. 1 on iTunes or Amazon and listen to the depth and detail produced from live improvisational jams by The Cyborg Trio.
Cyborgtrio.com
Myspace.com/thecyborgtrio
Reverbnation.com/thecyborgtrio

–Lowtide Beats–
Lowtide is a live electronics act based out of MA. Lowtide is composed of Eric Philcrantz and Producer Scroll. In addition to a ton of samplers and synths, they also travel with a full lights set up. Lowtide rocks live drum machine sets like no other act out there.
http://lowtide-music.blogspot.com

–The Scoundrels–
The Scoundrels are Grizzly and Scotch1. Grizzly is a dubstep producer and DJ from Boston, MA. He caught the dubstep bug in 2006 while overseas serving time in the U.S. Military and he has never looked back. Now that he’s free from Uncle Sam’s unrelenting grip, Grizzly is attacking the international dubstep scene full-force! With 3 releases under his belt already, he continues to progress on a daily basis. He is already receiving acclaim and props from artists such as: 6BLOCC, 12th Planet, Joe Nice, Deadly and Watson (of Futurism Recordings), Reid Speed, and many others! Keep alert! Grizzly is a force to be reckoned with…
Soundcloud.com/grizzlydubstep
Scotch1 grew up on mix tapes ranging from Dj Hype to DJ Dan. He began playing records in 1998, and has since played shows from Boston to Bali, with countless venues and parties in between. His main rule when playing: crowd control. From low-profile mood setters, to in your face smashers, Scotch1 can keep any dance floor filled.
Soundcloud.com/scotch1

–Split Phase–
Split Phase (formerly Synewave) is a live electronic duo consisting of Carl ‘transient’ Martin on keys and live electronics with Mike McIntosh on acoustic/electric drums and samples. Split Phase has been hard at work creating and developing a unique, energetic, and refreshing sound all their own. Experimenting with influences ranging from house to drum and bass and jazz to funk, they tap an eclectic mix of styles to weave their sonic tapestries.

Carl’s vast music experience spans the last 17 years. Stemming from his solo project ‘transient‘ (1994-2010), which includes a discography of 475+ tracks spanning more than 38 hours covering a multitude of genres.

Over the past 4 years Mike has established himself as a rhythmical genius with his sticks. Honing in on his style and learning new skills along the way while constantly challenging himself with odd timings and beats on every track.

With the recent release of Split Phase‘s new EP titled Hooves Clackle, Mike and Carl have brought a reinvented and redefined sound to the forefront, while still staying true to their roots. From the beginning Split Phase has been a constantly evolving force adapting a do it yourself mentality in and out of the studio, from music production, recording and mastering all of the tracks in house. This combined with the live lighting and visual projections by Nate VanSlyke make for a must see live music experience. Split Phase‘s previous accomplishments include playing the 15th Annual New York State Harvest Festival, Camp Bisco 8 & 9, the Utica Music and Arts festival, along with many other venues throughout the NorthEast.

–EJ3 Robot-
EJ3 robot is a musical aficionado of sorts, who uses keyboards, guitars, samples and looping devices to produce unique blends of funk, trip hop, jazz, blues, trance and jam rock, while also invading and meshing other genres of electronic music . In a live setting, EJ3 captivates audiences with his improvisational method of creating inventive grooves and building exploratory jams from scratch. He has been playing drums, guitar, bass, piano, and writing music for over 15 years to contribute to what he states is one of the “reasons for being alive”. This being so that humans can connect with each other. “I want to be a robot (something that is disconnected from humanity ) … an isolated figure, so that I can attentively observe all of the human connections from the outside through my music, and see them with all of their beauty.”
Famelessfam.com
Soundcloud.com/ej3-robot

–Coralcola: Boston MA-
A vehicle destroyed, a pizza delivery job terminated. EDM dilettantism and general disillusionment soaring at a fever pitch. For Mikey Lee, early 2008 resembled a topography of dark and untimely events, and the assemblage of lush, listless bedroom tunes was the most powerful antidote. A point of return was realized in the eponymous track “Heath Ledger” — an ode to troubled dynamism and superficial fascination in the wake of the subject’s overdose. This attracted the attention of DJs Die Young and David Day, residents of the local electronic music fixture Basstown–and ultimately lead to a debut performance– supporting Kompakt’s techno-maestro The Field.

Mikey’s DJ residences around Boston, just about an hour east of his hometown of Worcester, a dense cloud of blog-followers, and the self-released EP cassette 747 aggregated in a nomination for the Best Local Electronic/Dance Act of ’09 in the Boston Phoenix, shows with Lymbyc System, Telefon Tel Aviv, and Small Black. The floodgates then opened gloriously for assimilation into the DIY basement party machine known as Big Digits with shows alongside Dan Deacon and Health.

With the arrival of the single “EGGGIRL” (ode to meme pinup EGGGIRL) in the Spring of 2010 and a slew of EPs and collaborations scheduled to materialize in 2010, the Coralcola forecast is bubbling and resolute. Mikey Lee’s auratic quest pushes forward to future levels, propelled by the everyday sifting-through and plundering of fragments of popkultur, foliage and industrial detritus of Worcesterian suburbia.
Soundcloud.com/coralcola
Coralcola.net

–Amobriax: Boston MA-
Amobriax is the new project of Boston-based musician/builder Nathan Trites. In addition to 8-bit performances under the moniker Mr.Eggz, Trites is also a member of the Cambridge based analog synth company Flower Electronics.

See you out there!

This week (September 15th) marks the official release of SubSynthesis.com‘s highly anticipated Bass From Above:…