Let us work our way through Saturday. Keeping along the same lines, we started things off nice and easy with some sonic explorations with the likes of Janover & (surprise last minute announcement) Welder sets amongst the White Cedars once again.
[Please read the post dedicated to Welder/Eskmo here]

A perfect aspect to Sherwood Court in the daytime was the ability to sit in the shade amongst the ridgeline of Sherwood Forest. This was perfect for Lettuce‘s full feature presentation. That is summer time feel good dance music, good-natured stuff that everybody can enjoy. I explained to everyone that Deitch was at it again (as well as homie from Soulive on keys, and a variety of other performers).

The daily sunset freshen up/rage gear re-stock brought us upon some dank, bellowing, wobbly bass melodies, sparked by a tasteful 4/4 minimal house beat. When I asked the gang if we should check out SuperDre the response was a “Right there? Hell Yeah!” in unison. Sure enough, our decision was a good one. Behind the decks spinning vinyl and effectively using her MIDI controller was a soulful woman with a Beyonce Afro, bobbin ‘n weavin along with the rest of the tech warriors. Showcasing some dirty bird house, Trentemoller-esque phat, groovey bass lines, and all sorts of other “keep it movin” goodness, she gave us a nice boost before it was time to costume change for the night’s affairs.

The Shpongletron Experience got things a little weird in Sherwood Court. One of the more packed occasions in that field, I found resolution and solitude by going around the far right side and making my way to the gate upfront. I met some awesome Shpongle virgins and we really connected – doing some paleontology work on the moon – while watching Zebbler do his thing. The visuals and 3D mapping displayed on the Shpongletron seem to get better and more intricate every show I catch. (The wagging tongue poking out of the Shpongle mask gets me everytime!), Simon was definitely playing around quite a bit with his mixing, as their were some funky transitions and non-Twisted jams that I’ve never heard him play before. The entire crowd got their Jig on to release the last ounces of energy we had in us, as Simon finished it off with a shortened rendition of the Hallucinogen track, “Jiggle of the Sphinx”. So jiggle we did.

The Saturday into Sunday sunrise set was a surprising yet fruitful renegade campsite rager with Jason Hahn on the decks. With lazers, hoopers on the van roof behind him, and a star-studded crowd that included Eskmo, Janover, and a variety of others, this wasn’t a time to get comfy in your tent. Luckily for us it was about 2 rows of cars over and it was quite the high energy DJ set. This is after Hahn had played 2 extremely long Cheese sets the past two nights, as well as more to come the next night with SCI and EOTO. It’s a beautiful thing to watch somebody with so much passion be able to do what they love best for masses of people. Once Jason finished, family and friends gathered around him to say “whatsup” and give him his due props. I made my way over and let him know the LiS fam, Boston peeps, and Ranch gave a warm hearted hello. Another successful 20 hour rager was in the books.

Papadosio is a band that hasn’t received as much recognition as I believe they should have already. They were quite enjoyable as a whole and you could tell everybody that happened to catch the show was a true fan. There were rumors flying around that the upcoming Break Science Forest Stage set was going to feature Derek Vincent Smith, also known as Pretty Lights! It quickly proved futile and extremely difficult to weave our way anywhere near the stage. Towards the back people were asking each other if that was in fact, Pretty Lights. [It was]. It was nice, sort of refreshing in a way, to catch a set with Deitch (who hasn’t been on the most recent tour) and in a setting you don’t normally get to experience PL – during the day, in a forest, and without the enormous stage setup and light rigs.

Beats Antique were the recipients of an awesome time slot. From 5:45 – 7:00 at the Sherwood Court stage, they played the “calm before the storm” perfectly. Their job felt like they were to act as the crossover between daytime festy music and night time rage. It was an exceptional set, running through all the favorites and playing a new track or two. Zoe Jakes & her co-mamas were looking beautiful as ever. When they came out as the dance trio, they slowly walked towards the front of the stage with Jakes leading the way. The other two were hidden behind her with the giant Swan feathers disguising what was about to break out before our eyes. As they reached the front and the beat dropped, the two split out to either side and fluttered their feathers as if to cool them off from the blistering sun, now setting and beaming directly onto the stage. That’s one band I always look forward to seeing on any festival’s lineup. 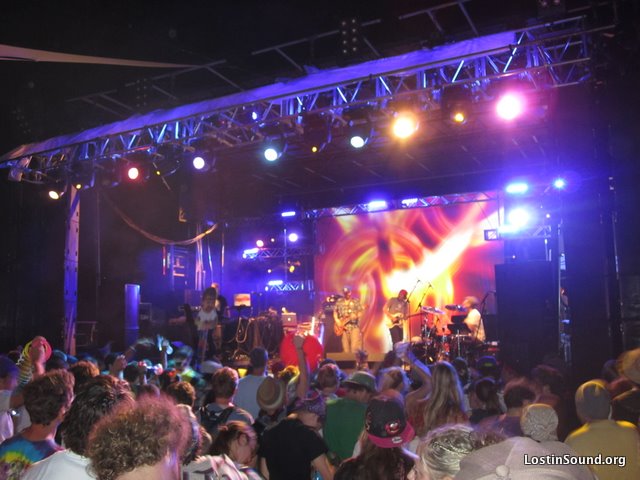 Knowing somebody has the dedication and exuberance for performing that Darren Shearer of The New Deal does makes these weekends well worth it. Resuming our rage at Tripolee – the front right side – our bodies wiggled haphazardly, after our legs had endured quite the long weekend. Conspirator played easily close to – if not the best – set I’ve witnessed from them. Accredited to Shearer on drums, the band is really hitting their stride with Michetti on guitar. A couple of new jams are really taking shape; the whole performance seemed very cohesive and varied styles extremely well from song to song. Jeremy Salken (drums – Big Gigantic) came out for a song and it was one of the crowd’s favorites. It was a new track that was bass heavy and even lent itself to some wobbles. Conspirator showed that even a live band can play a perfect dance tune, raging the crowd into a feverish dance party. And it didn’t stop there. Getting a later start than scheduled, Pretty Lights came on for the second time that day. This time with his brand new, massive LED light rig backing him up, and with what seemed like a never ending crowd in the Ranch Arena to fuel his fire. He opened with his new track, “I Know the Truth”, premiered at Bonnaroo a few weeks prior. Taking a lyric from the song, it literally felt as though PL had “No Mercy” for the crowd.

To help facilitate the comparisons between Rothbury and Electric Forest, EOTO were the festival closers. Groups of friends finally all seemed to be gathered in the same place, enjoying the ending to an incredible weekend. Special, indeed. Eoto was killin it, and they were varying forms and styles pretty regularly. It wasn’t 100% dubstep, which seems to be some people’s complaint about EOTO recently. Hahn provided the crowd with some entertaining lyrics and rhyming loops, a regular practice at recent EOTO shows. Travis was also wailing on his axe at any chance he got. For the first 1/3 of their set, their timing & transitions seemed to be slightly off. It was a bit messy at points, but they made up for it in energy. However, this is somewhat understandable, considering that only less than an hour before they had played as SCI and were no doubt tired. Eventually, as we all knew they would, they hit their stride and the set became a giant, heavy live electronica set. Slam dancing, no shoes, glowsticks and a heavy last night consumption of party favors was the standard. Eventually, about half hour after the scheduled time permitted, Hahn & Travis ended Electric Forest 2011 as we knew it. I must say that I was a little disappointed that no guest appearances were made and that they didn’t come out for an encore. Although I couldn’t stay upset for too long considering what we had all just witnessed. To Sherwood Forest the masses meandered, for one last chill out session and we all reflected on the magic surrounding our lives at this point in time.

Watch this amazing video from our homies, 30PROGRESSIVE. As I was watching this I kept assuring myself the video would continue on-and-on for the entire length of the festival. I think the video tells an amazing story – similar to living in NeverNeverLand.

“Well, people are obviously and probably just fucking with people, b/c that’s what we do here right? Some of names I’ve given people at these things, omg who even knows. Probably scared some away at the least”, said BigNick KeepsitMoovin. But yeah, we all come to these things attempting to set ourselves free and express the kid and silliness we have constantly brewing within us. Growing up is obviously not an option. But taking vacations to let that kid inside of us live again, except only now with adult catalysts and entertainment, is the best option we have as we ripen and peak as human beings.