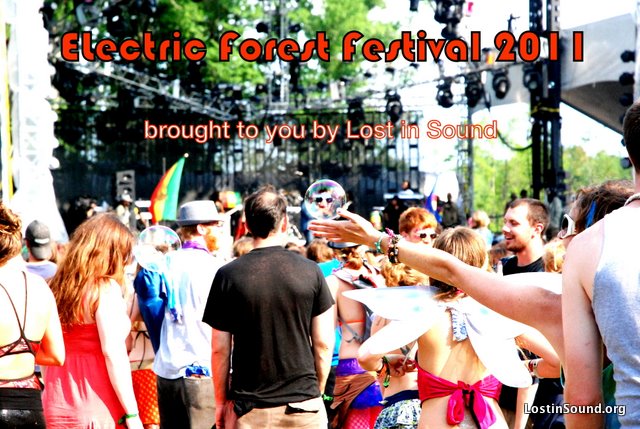 Although I was hesitant at first, July 4th weekend in Rothbury, MI proved to be just as special as the last time I visited. After taking a year off and sporting a new name, Rothbury transformed into the Electric Forest Festival; yet the most beloved place of all, Sherwood Forest, didn’t sway off the expected one bit. [Editor’s Note: LiS lost our video camera the first night due to some circumstantial Excision Womps. Therefore, this coverage won’t have any exclusive vids & for that, we apologize]

Car lines had wound around the entrance field for hours, until the [earlier than originally announced] gates were opened at 5:30am on Thursday. Although the car lines/searches were organized, quick, and painless, one thing the staff did not have covered was knowing where anything actually was. Mobs of people attempting to pick up their wristbands were traveling around asking for the “insert searchable ticket window here.” With the sun overhead and all sorts of tunes blaring in the background from car radios, and footballs & discs flying through the sky, we magically shimmied our way out of line and into the Volunteer/WET campgrounds and grab a gem of a camping spot. We were able to reserve space for late arriving homies, something you couldn’t do amongst the farther fields with 20,000 other attendees.

How quickly tides can turn. Watching skies rumble over the hills from the west end of the Double J Ranch, people rushed to finish up the last minute preparations of camp. Who knew what Mother Nature had planned. None-the-less the show must go on, and Lynx kicked things off with a slight drizzle over head. Beat boxing her way into a wonderful opening set, the clouds finally reached their pinnacle and relentlessly exploded. That sort of put a damper [no pun intended] on things and I wasn’t too keen on trekking around through a couple of the sets happening at that time. Instead, Excision was the feast of Thursday evening and people waited until the last possible minute to try and catch a break in the downpour and run to the appropriately entitled main stage, Ranch Arena. Successful, we were not. Drenched and no Excision on stage, the frisky crowd filled the downtime with chants, Monkey vs. Penguin fights, boos & booz-ing when eventually the British Columbia native took the stage. The protective sleeves were lifted off of the giant racks, the crowd went nuts, and the mayhem began! 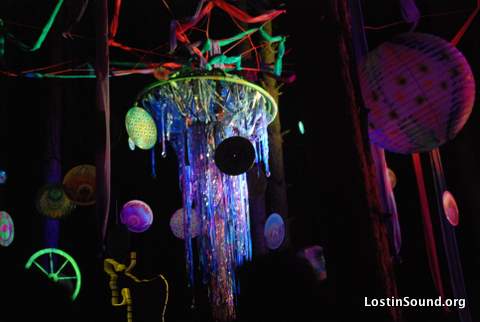 It felt as though every person that had made it to EFF for the first night had made it a point to be at that set, and the rain delay just built pent-up dancing legs that were ready to explode into toe drags across the field. Bustin’ out tons of drumstep, hiphop dubstep remixes, hilarious transitions, and every track you’d want him to play was only half of the subsonic experience. Even over 100 yards from the stage beyond the soundboard, the bone rattling, gut ripping womps, rips, booms, and drum beats tore through the forest. [Later on I even overheard a group of friends talking about it, and one referred to the sound as frightening!]

My expectations of Lotus were let down, as the band just didn’t seem as into the set as “jam-band” music requires. In general I don’t feel like they’ve been the same since Chuck Morris left percussion. [Note: By no means is that meant to take away from the amazing job Mike Greenfield does holding it down, but that 5th member is key to the glue of the band and giving it that extra oomph in the dance department]. Instead it was Kaskade. And he was SERIOUS. People were gettin’ down hardbody karate. No for real, I even saw some flying scissor kicks to go along with the heavy fist pumps and rump shakers. For the time being the rain had subsided, which was a pleasant surprise. After a foolish yet extremely enjoyable camp grounds excursion, a smothering and intense storm took over the skies once again and until about noon Double J was its captive. Gray skies prohibited the ear to ear smiles and rage gear customization, but only temporarily. 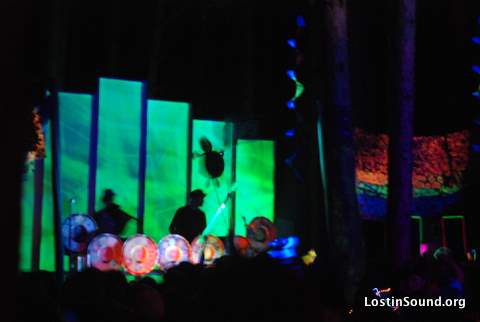 Stephen Marley took the hesitant sun and helped it shine on through to the other side of the clouds. All 30,000 of us were yearning for the mood to be lightened. Doesn’t Reggae just seem to do that? When happy moods, smiles, summer, and most of all SUNSHINE are in order – any Marley will deliver! Another mood illuminator, The New Deal, happened to be on the Sherwood Court stage next. Even without their normal bassist, nothing seemed off key or sketchily unrehearsed. Some diehards might not appreciate me saying this (tho I’ve seen New Deal dozens of times myself), but this was one of the best sets I have seen them play. Some tracks were down-right dirrrty.

Cheese was stellar. But as previously stated, I’ve lost all my journalism tools including my Moleskin notepad. So I wouldn’t be able to do a good job of discerning between each set I saw and I’m not an aficionado so I don’t have track names buried in my brain. As well as length purposes, I’m going to avoid that part of the festival, and I’m sure you can eat your Cheese elsewhere if you so desire. I penguin-stomped my way over to Tripolee stage (same as Rothbury) for a stellar Vibesquad set. At that point the cheers and smiles coming from the patrons were at their highest peak of the weekend [so far]. It was unfortunate to have Elliot Lipp supersede Aaron Holstein on stage, because it truly came as a letdown. Therefore, it felt like a perfect time to enhance our moods with a chill-out sesh for the first true Forest Stage experience.

Emancipator at midnight, with blacklight jellyfish dangling from the trees and the organic violin resonating all around us, brought my mental-being to another world – a place where I wish it was more. Stepping back into the womp game –Dieselboy at Tripolee – after a beautiful “Good Knight” with Doug & co. amongst Sherwood and my new found friends. Tripolee, with the 2nd best sound-system of all 4 stages, played home to the un-official electronic music mecca of EFF. Although not labeled as such, I guess this was a Dieselboy “dubstep” show. Basically he’s blended his style of DJ’ing, giving him the freedom to transfer genres or perform however best fits that show. Most of the time it comes out as drumstep, but this 2am set here was almost strictly dubstep.

The first heavy heavy assault of a set, the crowd was going bizerk. Dance moves imitated a personal (self-contained) mosh pit [which I fully encourage – just goes to show who is “losing their shit”, and letting the bass take over their body]. Upfront on the right hand side you could find tons of said people. Plenty of room to be ourselves while simultaneously being plastered in front of giant stacks cultivated this rage.

Unfortunately, Dieselboy closed his set with “Tetris”, the exact same encore from Excision, a mere 24 hours prior. [This is an Excision original, FYI]. He obviously didn’t get the memo. Either way, the energy was there and the toe drags were plentiful.

Naively we decided Cirque de Womps was more important to witness than Break Science. It had something to do with the fact that their name was intriguing. After realizing we had made some type of mistake we attempted to transport our wobbly bodies powered by psychedelic minds constantly sidetracked by the freak shows and hooligans acting as loose as can be. Not to mention the black-light system and a high quantity of art, giving Double J ranch a magical and mysterious feel. Our psychedelic minds let our bodies wander through time without a destination to whip us into a predestined line, like animals roaming the streets after escaping from the zoo.

Ahhh what was that in the distance, live drums and some serious wobble? Sherwood Court was glowing and we could literally see the sound waves wiggling through the air into the forest and being swallowed by the massive White Cedars. Or so we thought. I explained to my comrades that this was the artistic output of Adam Deitch, a Berklee [Boston] graduate and drummer extraordinaire. That set packed a punch and I heard a lot of new stuff I really enjoyed. [Later to be confirmed at Camp Bisco X]. You could turn 180* around and stare back at the Sherwood trees – ROYGBIV fractals engulfing the treefarm which felt like a colossal enchanted scene from a fairy tale.

[2nd day notables: Feed Me brought some really high energy dance music, straight feel-good party beats. The Penguin formerly known as Sami meets actual human penguin for a quick shimmy during Cheese.. Hood Internet made me stop and checkout the set for a few – some funny r&b samples over womps]

From just before dawn through that morning’s sunrise were some of the most freaky, foxed up, tweaking, lovable and fun hours I have spent in my experience of dawn parties, and I’m no amateur. I love attending a festival in Michigan, or other centralized locations, because you bring people from all over the country. This adds variety, different tastes and cultures to the weekend.

Whole books could be written about some of the characters from that morning. Some of my favorites were: a kid from Minnesota who frequents renegade raves in the forest, “Puddled, the DJ”, who surprisingly picked some sick beats but couldn’t transition to save his sanity. Another tribal Indian wook was cleaning up all the butts on the ground, on a cleaning binge from not sleeping in over 48 hours [yeah, one of those 🙂 ]. Some witty trimmer types from Humboldt, and various other types of people that society labels as deviant. Those are our favorite times of the day. Times of the year really. These are perfect reasons why people like us make 16 hour drives, right?