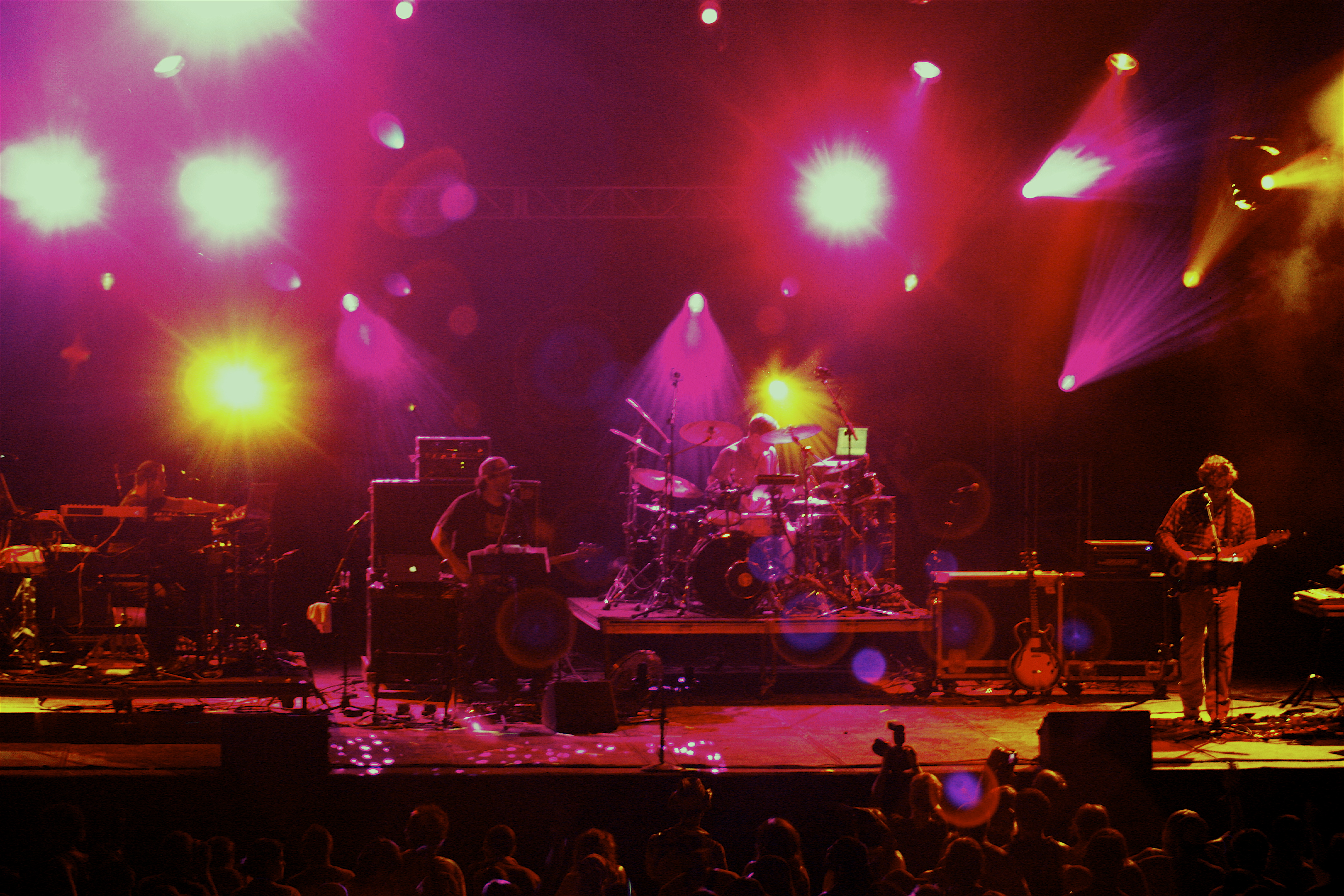 It was only The Disco Biscuits’ second time playing Wakarusa, and their first trip to Mulberry Mountain. By closing out Thursday night on the Main Stage, they would officially be the festival’s rage opener. The Main Stage field filled with local festival goers who had yet to catch a Biscuits show, as well as experienced fans- many of whom thought they had the clairvoyance to know exactly which songs the band would play. I sat somewhere between these two distant classifications. I don’t feel a need to know what songs to expect from the band’s 15-year repertoire, but I sure do love a dynamite show full of some of my favorite songs. The Wakarusa set turned out to be just the show I was hoping for.

The set opened with one of the band’s less popular new songs, “Mirrors.” I feel like this song is coming along, although it hasn’t reached a point yet where I get too excited to hear it. As the show started, the crowd was more interested in taking in the beautiful mountain setting and jiving amongst each other. The band then played “The Bridge,” a song they debuted at the Ogden Theater on 5/28. I thought that this song-a Marc Brownstein ballad- was pretty dope, considering how new it is. A slow song, but one with a driving force of strange synth sounds and dirty drumming by Alan Aucoin. It seems to be one they are proud of, as they continue to play it throughout their summer tour.

The show began to heat up as the band dropped my oldest favorite song, “Caterpillar,” and took it directly into a “Spacebirdmatingcall.” Both of which were left unfinished. There was a dark 15 minute jam during “Spacebird” that twisted up some folks around me so much, they literally booted from getting down too hard. (Don’t forget to hydrate and breathe while dancing yall!) It’s satisfying to catch a run of some of the band’s older, most popular material. The Biscuits then went into a full “Cyclone.” It’s always a good bet to play this song mid-set, as it allows the band time to take the crowd for a tranced out whirlwind of jamming. It’s easy to get lost in this one, as the band took Waka for a raging ride.

I regained full mindfulness when I heard the familiar sound of “Above the Waves”- a song they began the night before in Kansas City. Jon “Barber” Gutwillig and Aron Magner really shined during “Waves,” as the near flawless rendition made me grin and meditate. There was a point- possibly one of the most beautiful moments I’ve experienced at a Biscuits show-where Magner produced the most serene flute sounds from his synths. It reminded me of just how talented and classically trained the Disco Biscuits’ keyboardist is. They concluded “Above the Waves” with a considerable amount of grace-something their new material could use more of.

From the show’s high point, it took a quick dive straight to it’s low point- “Rockafella.” I know that the band thinks this song is real smooth and funky, but really it’s pretty godawful. It’s not the easiest thing for them to stay together during this one. As I looked across the crowd and at my crew, I noticed most people standing still or seeming to loose their buzz. Personally, I think the lyrics are pretty weaksauce. Barber decided to set his guitar down, grab the mic from the stand and sway around the middle of the stage while he struggled to get the words out. Someone should tell them to leave this song off their setlists.

But praise the Digital Buddha! In came the shoulder-controlling bassline of “Little Shimmy in a Conga Line”- possibly my favorite Biscuits song. I thought the crowd really enjoyed the groove this song provided, transitioning back and forth from fast to slow. “Get it moving, right in time. Lets see Little Shimmy in a Conga Line,” Barber and Magner sang as I shook what my momma gave me and encouraged those around me to do the same. As usual during “Shimmy,” I left the area I was dancing in and made my way closer to the front- just the way my feet happen to take me. The band took “Shimmy” into a gratifying, powerful “I-Man,” then back into “Shimmy” to finish the set out strong. Brownie expressed his gratitude to Wakarusa for having them back, and reminded the crowd just how hard the band works (without sleep) to produce Disco Biscuits shows every night across the country.

Today, we upload something that many of us have been waiting quite some time…