We took the field at Wakarusa at noon on Thursday – hippies, harlequins, ragecats, hustlers, dopefiends, riders, groupies, custies, bros, hoes, tour rats, posers, wooks, crooks, good ol’ boys, artists, undercovers, hicks, chicks, hoopers, freaks, fruits, burners and beauties. I hadn’t slept in two days and sputtered around setting up camp and finding people tickets. The airline left my bag in El Paso so I had no shorts or sandals until they delivered it to the festival gate that afternoon. I hate checking bags, but a man needs his rage gear. Packing light for this excursion, I brought a full-length black silk robe, 3 sets of pants, shorts and shirts, a couple crunk cups, a feather headdress, 2 vests, boots, dancing shoes and sandals, a severed head or two, my voodoo doll, rain gear, 3 hats, 2 masks, a cape, bodypaint, 4 hoodies and a smoking jacket, not to mention essential tools like knives, corkscrews, glowsticks, inflatable mascots and of course the sacraments, I mean ONLY WHAT I NEED TO SURVIVE!

Epic characters seem to gravitate towards our crew. We had close encounters with a Zulu Priestess, naked except for a grass skirt, white tribal paint on her ebony skin, dancing for rain with a glowstick spear. She got her wish, but thankfully the storm came during the exodus.

There was Rowdy, born and raised in the Ozark hills, who shared the nefarious glint of her eye with us, drank all our whiskey and promptly moved on to pillage another camp; she was such a wild uninhibited mama, nobody minded. Which brings us to the emaciated Naked Chick On Acid, running around by the Grassroots California booth yelling “I’m on acid, follow me!” Then darting off into the campgrounds only to return and frolic like a Dr. Seuss character.

The Super Familiar Guy found me as he went around greeting all the spunions like he’s known them for years: “Hey, how are you? Good to see you here!” and getting a wide array of responses, from confusion, to fear, to even greater familiarity: “Hey, it’s YOU! I can’t believe you’re HERE, man!”

And Cranberry Juice, the most hardcore member of the Grateful Dead Family ever. He was born in the back of a tour bus to a seventeen year old girl on acid, who had no idea she was pregnant, and thought she was having a bad case of cramps when going into labor. Her friends kept telling her to drink cranberry juice, so when a baby popped out, thats what she named him. He never went to school and has lived on tour his whole life. He pops out his glass eye and does nitrous through the empty socket to freak out the squares and anyone else who’s watching. I love you Arkansas!

As for the music, the Biscuits opener was solid, with a ridiculous Spacebirdmatingcall > Cyclone > Above The Waves that got dark and nasty in the middle of the set. I was scaring people in the back, dancing like a madman in my wolf suit. It got me on the level.

STS9’s set on Friday was a little weak because of power issues (Umph‘s light show and day set apparently blew out part of the Main Stage), and they sounded really mellow for a lot of it. They still pulled off a decent set by throwing out some classic tracks like “Arigato” and “Ramon & Emiglio”, but it was clearly hampered by technical difficulties.

The weekend was filled with new discoveries, like the mad antics of  Spoonfed Tribe and the bizarre stylings of That One Guy, who plays a homemade organ-like instrument and is the only act that Buckethead will let open for him. 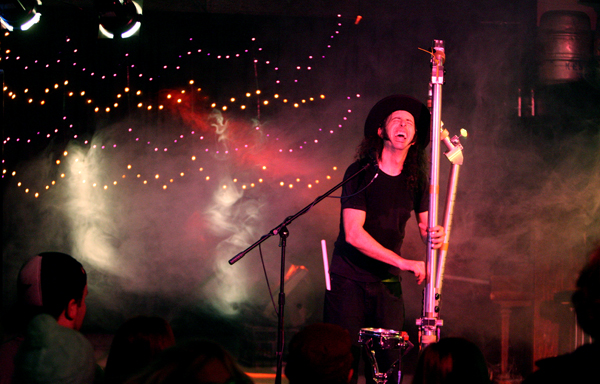 I was pleasantly surprised by the power and talent of The Black Keys, who delivered a great daytime set on the Main Stage, and by Widespread Panic, who I haven’t seen in years and was a lot of fun. Jimmy Herring ripped it as usual, and though some Spreadheads were critical, I was groovin on it.

Lotus, EOTO and Ott killed it in the Outpost Tent late night – there were fire dancers spinning poi and staff, and a raging lightshow – tribal mayhem abounded. This zone was the highlight of the Festival for me and went off hard every night.

Check out this video from Lotus Thursday night – I haven’t seen them in a while, and was really impressed with their show and the energy of the crowd. The set glided along smoothly and left everyone in a really good mood. This is “Spiritualize”, one of my faves:

EOTO was up next on Friday night and really mixed it up, bending the boundaries of Dubstep, Drum n’ Bass, and synth rock with a swaggering set that had us tearin that tent to pieces. A taste can do no justice but it came out well courtesy of Dizzurt..

Right before Ott, we were introduced to Dub Tribe Soundsystem, a really impressive duo from San Francisco. They used a lot of live vocal sampling that sounded like chants from the Amazon, over beats ranging from liquid dub to hip-hop breaks. Later, I learned that this was no new act – its a revival of a major West-coast electronica act that raged from 1991 – 2005 and helped set a lot of the dub-heavy trends that are huge right now. Husband and wife Sunshine and Moonbeam Jones are back at it, with weirder sounds and more equipment, playing a handful of festivals and hopefully releasing new material soon. Check out dubtribe.com and some of the scenery from their show at Waka:

Umphrey’s McGee‘s late-night set in the Revival Tent was on a mission from the start and took no prisoners. Blasting off with “Bridgeless”, I knew they were going for something special; the setlist and explosive energy made sure they’d be a headline. There were no Bayliss ballads, no noodling around, just charging through the stuff no one can argue with: “In The Kitchen”, “Miss Tinkle’s Overture” > “Stepping Razor”, the “Come Closer” Beatles / NIN mashup, and their best new tune “Cemetary Walk” as an encore. Thorough!

John Butler Trio was a nice, light, happy closer – the scheduling was really impressive throughout, and built momentum each day with a mix of funk, blues and electronica that always seemed appropriate for the moment. There were no terrible dilemmas or choices to make, just a steady flow of great acts. Hugs to the masterminds!

Here are some pictures I’ve gathered: 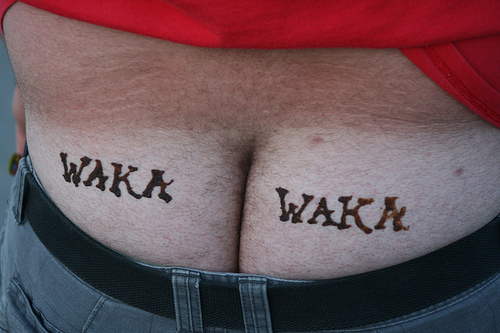