“In order to change an existing paradigm you do not struggle to try and change the problematic model. You create a new model and make the old one obsolete. That, in essence, is the higher service to which we are all being called.”  – Buckminster Fuller

“Play is the answer to how anything new comes about.”  – Jean Piaget

Read comments and join the discussion about this essay on Michael’s Facebook profile: http://bit.ly/problemandpromise

Someone I had once called a friend, whose work I consider extremely important but whose attitude I find tiresome and counterproductive, recently wrote to me:

“You live in denial and a false reality, and I don’t. I live in the real world and grapple with its problems every day; you spend your life running from reality, hiding inside little bubbles of like-minded escapists in festivals and secluded retreats, where there is 100% confirmation bias amongst the homogenous crowd.”

This was my response:

“As for ‘hiding in festivals,’ I go where I feel like I’m needed. I don’t see like minds; I see lost souls, a society with great potential that lacks the grasp of context and sense of purpose necessary to do something constructive with their lives. Burning Man is the sole exception, where I feel like I’m mostly among family. The rest of them are, by and large, ugly commercial events where I’m doing everything I can to bring a candle to the darkness and offer people some genuine and inspirational experiences. I am fighting as hard as I can to ensure that my generation isn’t wasted on meaningless consumption and hollow drug experiences but is able to recognize and wield the positive and constructive potential of festivals – namely, to create a space where people can network, share worthwhile ideas, and assist one another in their potentiation, instead of just buying shit and getting fucked up.”

It was a hip shot, an emotional response, and I don’t want to give anyone the wrong idea.  So I’m going to spend the rest of this essay qualifying and elaborating on this perspective.

Someone once asked the Dalai Lama what was the one thing that everyone could do to help bring about world peace, and he said, “More festivals.”  When I look at the future, I see the city reinvented as a festival sort of like Burning Man (although more responsible) – a place where people can come together in self-sustaining mutuality and give freely of themselves to one another.  This is the kind of thing that can’t happen until we straighten out a lot of current problems – until we have reliable household energy sources that can get everyone off the grid; until we’re not all feeding, by our compliance or complacency, authorities who refuse us our sovereignity under the pretense of security; until social pressure or the inescapable reality of ecological and economic crisis forces the confused desires of the head to be subordinated to the wisdom of the heart.

Admittedly, there are many other social issues I find of dire concern – not the least of which, our broken justice system and the runaway incarceration of nonviolent offenders that has trapped a terrifying percentage of this nation’s creative capital behind bars.  Thinkers as diverse in disposition as Buckminster Fuller and Terrence McKenna have agreed that, fundamentally, we are suffering from a crisis of the imagination – the inability to recognize the solutions available to us with the resources we already have. The current waste of human brilliance in prison cells has us starving to death in a grocery store, and I commend and support people working in journalism, poverty relief, and the legal world in order to heal this incredible wound.

Some of my friends are working tirelessly on this.  The Rootwire Festival in Ohio is primarily about connecting people and plugging them into a larger context than their own petty escapist desires.  My friends in the band Papadosio, who host Rootwire, are proud to tell stories of how their event has turned peak-addicted ragers into community-minded lovers, and I commend them.  The Manifestation Celebration is another event that seems to hold the promise of transmuting the energies of mindless entertainment into miraculous, milestone moments than can turn people’s lives around, free them from restrictive habits and limiting assumptions, and liberate them into a bigger sense of self and world than they thought possible.

(I’ll be the first to admit that I’m leaving out shining examples of socially progressive events into which people have poured their sweat and blood completely.  With only eight years in the game and most of those spent returning to a limited handful of standbys, I’m relatively new to the festival scene, and I don’t want to give the idea that the examples above in any way exclude other fine events from their due standing.) 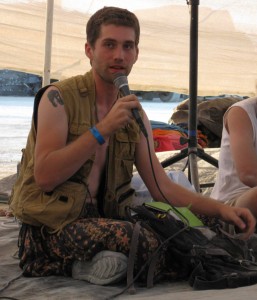 But most people I know wonder if a festival the size of Coachella or Bonnaroo is even capable of doing this.  I think it is…but I think it’s going to take intense commitment and hard work in order to even make the kind of ecstatic transformational experience that is the festival’s exalted potential something that would appeal to the consumer mindset.  Even Burning Man is increasingly infected with people who see it primarily as a rule-free pleasure zone instead of a daring and compassionate social experiment…which is why I find myself giving talks like this one there at every possible opportunity:

“Self As City, City As Self”

“Giving In To Astonishment:  Scenes From Burning Man’s American Dream”

Even in the darkest, most confused exploitative commercial contexts, I have seen incredible displays of heart, life-changing and soul-opening experiences.  But many of these events are organized by people who don’t realize that the actual value they provide is not an entertainment product to be consumed but a cultural container within which the community itself creates the experiences that keep bringing people back.

I’m right there with everyone else in melting my face off at Shpongletron and ripping my pants dancing too hard to dirty dubstep, but when it comes down to it, it’s the conversations I have in the campground, the looks I exchange with passing strangers, the surprising depth of insights that people lay on me when they volunteer interpretations of my art and music, and the small acts of kindness from the festival family on the next blanket over that keep me coming back to festivals.  These are the moments I want to widen until they swallow this toxic nuthouse we currently mistake for the human experience.  These are the first tentative, blinking doorways into a new world founded on love, wisdom, and the free exchange of our wealth and inheritance as a human family.

Admittedly, I started going to festivals as a teenager in order to get away…I mean shit, I was a teenager.  But eventually I found out that these liminal spaces outside of conventional time and culture are capable of much more.  They’re an acupunctural node in the collective human spirit where, properly applied, our energies can transform the rest of our world.  We very badly need a conscious presence in the entertainment industry, because that’s where everyone’s attention is, ANYWAY.  And God forbid we forget to have fun as we anchor that new world in reality.

But it’s going to take work.  And I hope you’ll join me in it.

SUGGESTED READING FOR PEOPLE WHO CARE:

Pronoia is the Antidote to Paranoia

“On The Flipside” (about the ethos & pathos of regional burns)

“How to get FREE from Programming of Mass Consciousness–esp. JUDGMENT!”

by Alaya Love (in response to this article)

(This essay is released under a Creative Commons Attribution-NonCommercial-NoDerivs License and you are welcome to share it accordingly.  For more information, visit http://creativecommons.org/licenses/by-nc-nd/3.0/)

Read comments and join the discussion about this essay on Michael’s Facebook profile: http://bit.ly/problemandpromise