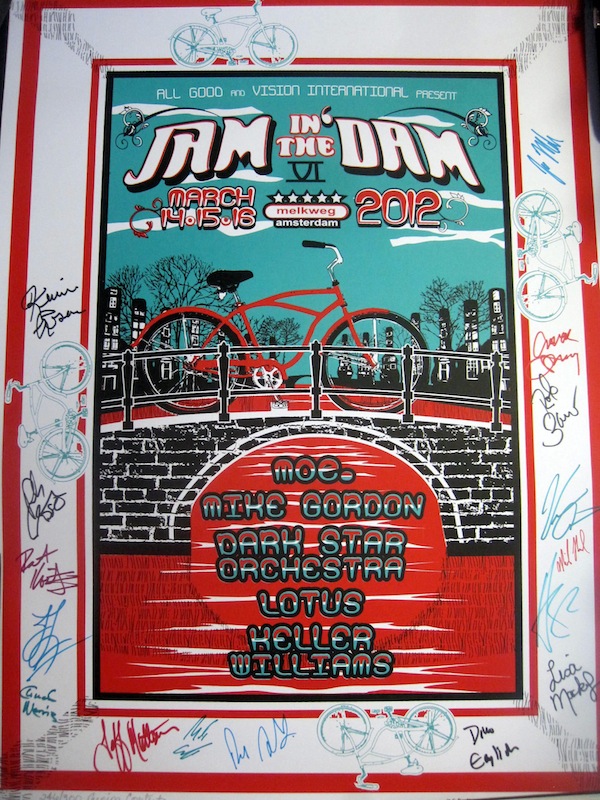 Jam in the Dam VI 2012 came back in full force after a year-long hiatus, since they last held the festival in 2010. With five brilliantly diverse bands, Moe., Mike Gordon Band (of Phish), Lotus, Keller Williams, and Dark Star Orchestra, and a multi-room venue on the water front, the event was nothing short of a wonder.

The festival was held at the astounding Melkweg, which translates in English quite perfectly to “The Milky Way.” The venue location was unbeatable, right in the central hub, sitting gracefully on top of the canal. The sound quality was perfect and the intimate venue allowed you to really see the bands play and get an entirely new perspective on bands which you may have seen countless times. It truly was an experience like no other.

This was a particularly special festival for me, as it was my first European festival. And even though I was born and raised in London, it was also my first time in the wildly magnificent city of Amsterdam. 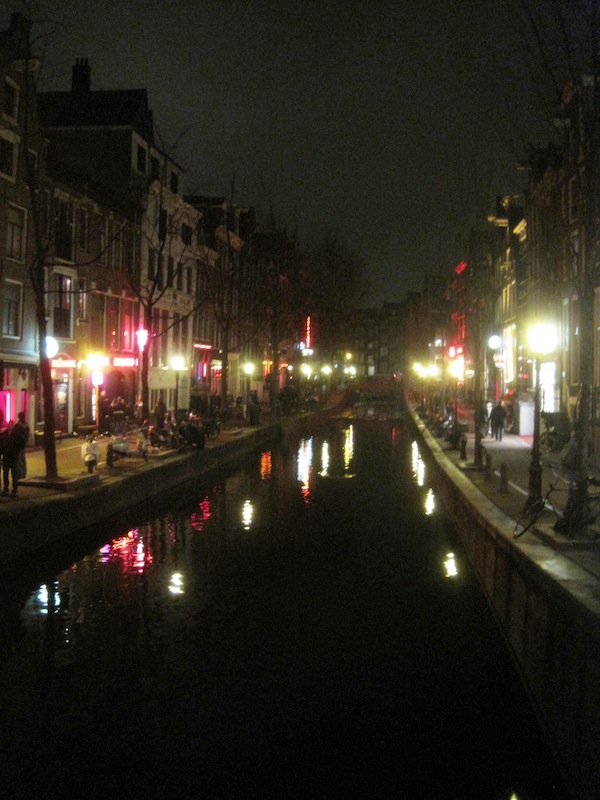 Amsterdam is one of those places, a vortex, a cosmic city, a jungle which inhales you in with every inch of its being. For the entirety of my time there, it emitted nothing but positive, warm vibrations, from the festival itself to the people and the beautiful havens of the world famous coffee shops dotted around the city. The city possesses an unrivaled stimulating essence, beaming out inspiration on the locals, the tourists, the travelers, and anyone else that might be so blessed to find themselves at any point in time in this small city with a big heart.

The majority of Amsterdam seems to be walking (or cycling) around the city with their feet on the ground and their heads in the sky. There is something so peaceful yet so lively about life here in this part of the Netherlands. It warms the soul from the inside out and radiates astonishing light incomparable to any city I have ever experienced. 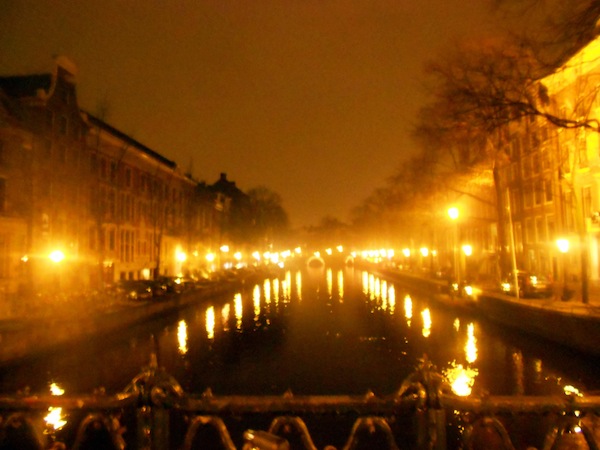 The festival took place on March 14th-16th, which ran from Wednesday until Friday, a time slot which most American festival goers won’t have encountered before. The setup of the festival was cunningly organized, the music didn’t stop from 7:30pm until 2:30am, allowing the fans to get lost in the culture of the city during the day and explore the bustling streets and calm canals as they pleased. We were very lucky to have the wonderful boys from Headstash magazine help put us up during the festival in an unimaginably beautiful apartment. We spent our days exploring with them and the nights enjoying the beautiful music. My highlights were our canal cruise, basking in the sunshine in the magical Vondelpark, exploring the Rijksmuseum museum through hazey eyes and getting sucked into the mind blowing art work, chilling out in my favorite coffee shops, Hill Street Blues, and Abraxas (which is of course where the Disco Biscuits got the namesake for their song when they were in Amsterdam for Jam in the Dam in 2008). I could go on forever describing the beautiful logic and freedom of the coffee shops and the entire dynamic of the Cannabis culture in this city but I won’t, I’ll just say that they are doing it right, and they have created something very special that the whole world could benefit from, if they were willing to allow themselves to. 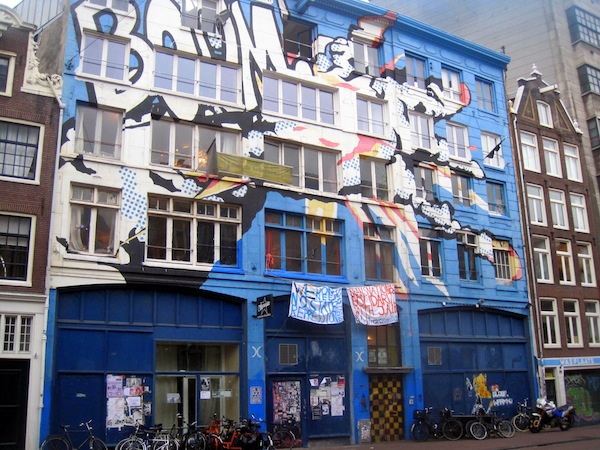 During the three nights of music, the bands were all on point and each night we got one set from each band, alternating between the two rooms and set times, which added a different vibe to each night. It was three nights of blissful music, spiced up with some beautiful exclusive collaborations which left the hazy crowd beaming. The Milky Way is a POT smoking only venue, so the air was filled with the scent of delicious trees, and not polluted by the stench of tobacco. The relaxed vibe in the venue and the extremely welcoming staff allowed all of us to feel truly at home in this brand new city.

The first night started off with some electronic relish as Lotus blasted off the festival.  After a small wait to get inside, we walked in to a bouncy Spiritualize which immediately had us on our feet in the front row smiling from ear to ear. We missed the first half of the set but seeing the Spiritualize, Behind Midwest Storefronts, Jump Off > Zelda > Jump off, was perfect. The band all seemed very mellow and smiley moving the crowd with the familiar thundering bass and epic guitar solos. Lotus, being one of my favorite bands to grace the lineup, was my definition for the perfect intro to the festival. 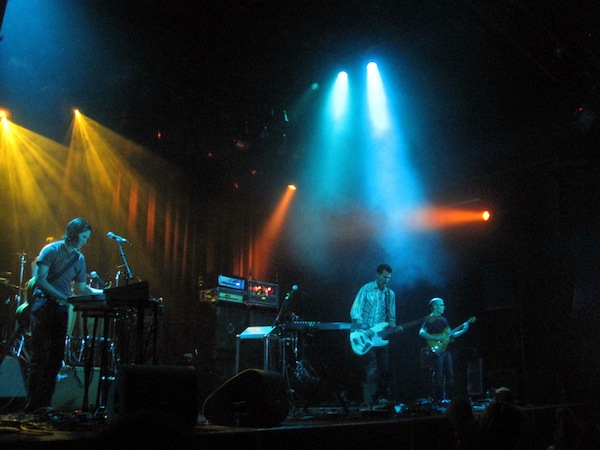 We then wandered across the hall into the smaller room, to get half an hour of the one man wonder Keller Williams and his wild, wacky, and undeniably beautiful vocals. We arrived just in time to catch him playing a beautiful barefooted cover of Can’t Come Down, a classic from the Grateful Dead. And to finish off the set continuing with the very welcome deady vibe, the guitarist from Dark Star Orchestra, Jeff Mattson, and both drummers joined Keller to play a lovely rendition of JGB’s Don’t Let Go.

Up next was Mike Gordon, the beloved bass player from Phish, joined also by the guitarist from Max Creek, Scott Murawski. We walked in during Sailin’ Shoes (a Max Creek tune) > Emotional Railroad , and they didn’t let any Phish fans down when they played Meat. They also covered Joe Croce’s You Don’t Mess Around With Jim, a MGB debut. We left mid set to catch Dark Star, who were headlining the festival and playing the longest sets out of all the bands (two 3 hour sets and a 4 hour set on the last night). 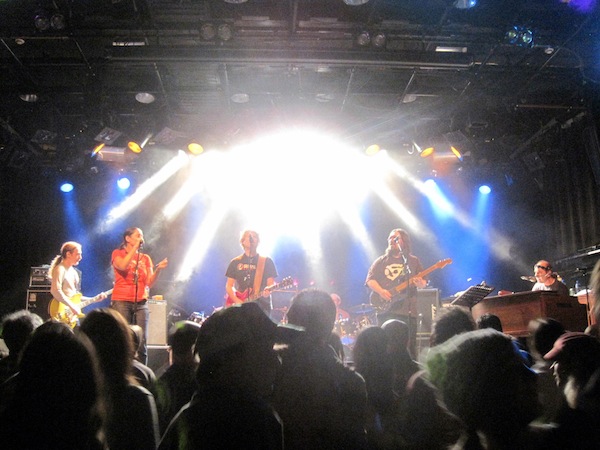 DSO was posted up in the smaller room all three nights which had wonderful acoustics and sounded spectacular from anywhere in the overflowing room. The crowd mostly consisted of older dead heads and moe.rons. DSO killed it all three nights and had a very positive gleaming reaction from the fans. This night they covered the Grateful Dead set from March 15, 1969, at the Hilton Hotel in San Francisco. I entered the room at the perfect moment, during St. Stephen, one of my all time favorite Dead songs. I have to admit I have quite a few, but DSO definitely covered several songs that hold a special place in my heart. In addition they played an extended Love Light, Dancin’ in the Streets and wrapped up the set with a heartfelt a cappella, Bid You Goodnight. It was entirely astounding and you could sense that they had touched the audience as everyone stood and stared in admiration.

Finally we headed to the max hall to catch the headliners of the evening moe. It had been a few years since I had seen moe. but I hadn’t forgotten how enjoyable their shows were, and especially how cool and kind their beloved fans were. I am not a massive moe. fan but they surely did throw down for Amsterdam. They opened the set with Zed Naught Z > Bearsong > Billy Goat > Zed Naught Z > Bearsong, a segue which seemed to please the very cheery-eyed moe. fans. They finished off with the song Timmy Tucker, which had the whole crowd singing along and bursting with enthusiasm by the end of the first magical night at Jam in the Dam. 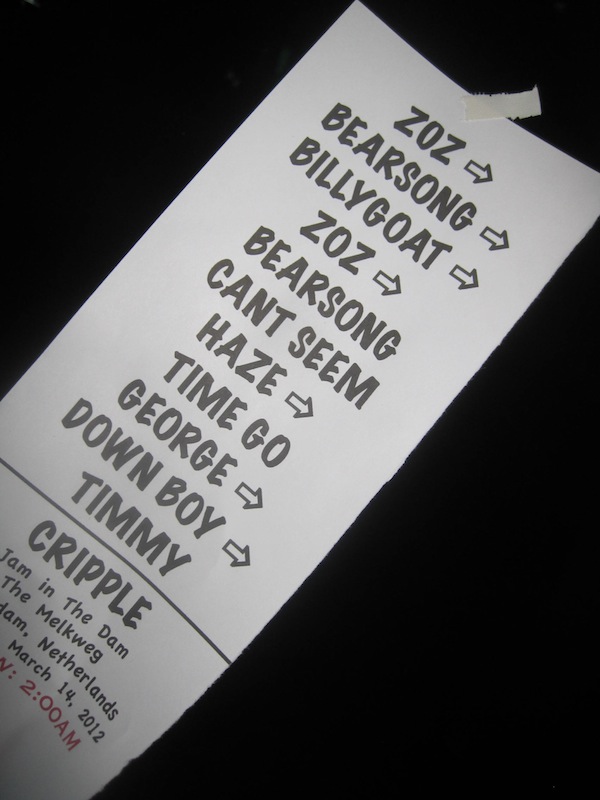 Running blissfully slow on Amsterdam time, we arrived on Thursday night at 8:30 in time to catch the entirety of Lotus’ set, this time playing in the old hall for 2 and a half hours. They pulled out the untz tonight, rolling away from the post-rock; the room was packed and everyone was getting up and getting down, and the atmosphere was buzzing. It was party time for the front row and Lotus played a fire set from the beginning, opening up with Hammerstrike > Tip of the Tongue > What Did I Do > Wrong > In an Outline. They then whipped out another one of my favorites Bubonic, into Golden Ghost, Wax, Blacklight Sunflare > Sid, and finally 128. Everyone was in their prime during this set, wild and wonderful vibrations were engulfing us.

We floated over to see moe., catching half of their set before we were enticed back to see the rest of Dark Star Orchestra, unable to keep away from the beautiful renditions of our treasured Grateful Dead.  However, we did manage to catch Keller Williams joining moe. on stage to cover The Band’s, Up on Cripple Creek. 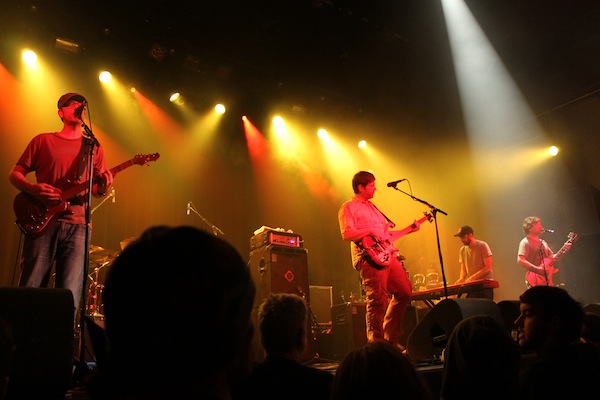 The highlights from DSO were Box of Rain, Mississippi Half-Step, Eyes of the World, and a wondrous Scarlet Begonias accompanied by Keller Williams.

We managed to catch the end of Mike Gordon to hear another MGB debut, they covered the song Kissing the Lipless by The Shins.  They finished off the evening with Babylon Baby, Funky Bitch, I Miss My Mind, and Hap-Nappy. We left the venue each night in a cloud of happy, sleepy joy, not a worry that could come to mind.

After astral performances from all the bands the previous nights, we were all anticipating an equally stellar night to close out the magical festival at the Milky Way.

We arrived a little later tonight; as each day went by we seemed to slow down with the city. Mike Gordon opened the night. I was disappointed to hear that I missed an excellent cover of Alanis Morisette’s Hand in My Pocket. Regardless the night was still young and although we missed most of MGB’s funky blues set, we had four hours of DSO to anticipate.  At this point in the festival there were lots of familiar friendly faces milling around and it was never difficult to find who you were looking for. Bouncing back and forth between the rooms and the balconies, we got an exquisite view of the Milky Way, and this venue no doubt is a force to be reckoned with. 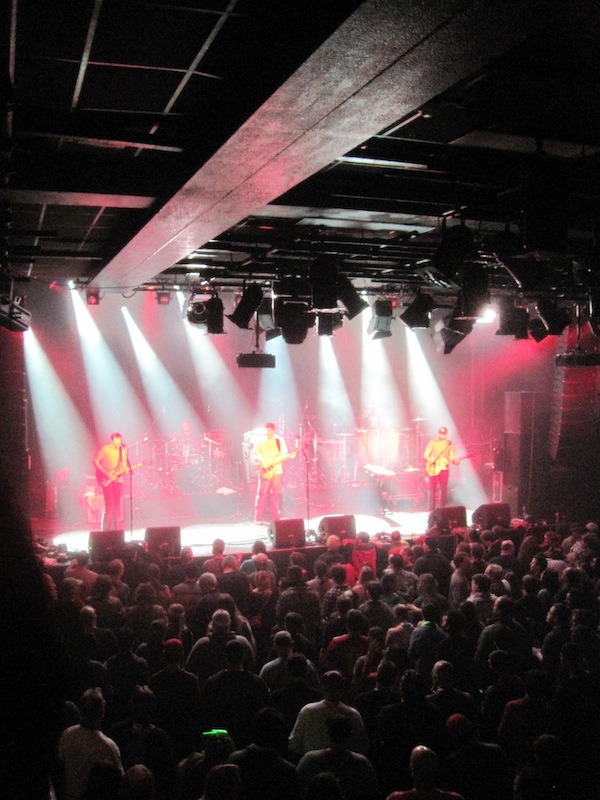 We caught a glimpse of moe. before the epic DSO set. moe. opened with Skrunk > The Bones of Lazarus, which pleased the fans immensely. moe. always brings a happy goofy warmth to the table. However, we had to duck out in order to get the absoluteness of DSO to our ears.  DSO had announced the set list they would be playing the night before which was the Grateful Dead performing in Amsterdam on May 10, 1972 at Concertgebouw. When we discovered the setlist and looked it up online we were amazed to see that it was 30 songs long! DSO worked it out though, and although they went over their time slot by about half an hour it was a beautiful set and an illuminating end to the incredible last three days.  My peaking points of this set were one of my most cherished dead songs Jack Straw. They also banged out Loser, He’s Gone, and Casey Jones, a beyond beautiful rendition of the set. This is the set in it’s entirety, from Bertha, into the popular encore Not Fade Away. 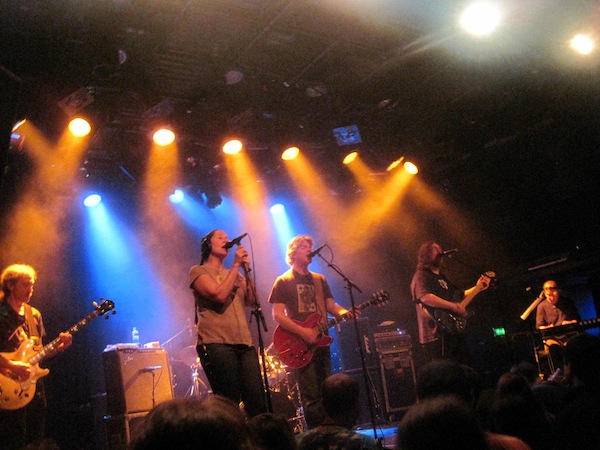 We managed to float in between Lotus and Dark Star, but watched the majority of DSO from the blissful balcony. Lotus wrapped up with a perfectly typical late night dance party. The contrast between all the bands was refreshing and by the end of the festival, I was filled with this elated dreamy feeling, it truly was something else.

Amsterdam is a very special place, a place that I insist all of you consider visiting, as it will enlighten you. I can promise that this city will sweep you off your feet and on to cloud nine, and once you’re up you won’t ever want to come back down.

200 lbs of bananas and a hippy stick of the sticky stuff, the clouds of…