It was the first event I’d covered since getting back from my twenty-month sabbatical three weeks ago. Other than a couple of Top 40’s parties back in 2007, when the venue still had that horrendous name and weak sound system, I had never been to a show at Royale. When I heard NYC’s Bowery Presents was coming to Boston to establish a thousand person venue slash nightclub I was a little skeptical about another massive music corporation extending its reach into our city. Now, it turns out that Boston’s Theater District has another beautiful, world class venue where a live music aficionado can find satisfaction both auditory and visual. DJ Shadow was back in Boston at as intimate of a setting as you could find him and I had press credentials for the first time in years, perfect timing.

I had caught Shadow once before in 2008 at Camp Bisco 7, scratching on portable turntables with his cohort Cut Chemist. It may have been the moon rocks, but the performance resonated with me, even as I was unfamiliar with his work and the craft of DJ’ing in general. I told everyone I knew before this Royale show that seeing him headline a venue this size would be a clinic.

Coralcola (Mmmmaven) opened the show with an extended 90 minute set. Sporting a vintage Bruins baseball jacket and a ginger lumberjack beard, the Worcester, MA native showed versatility showcasing deep Lounge-Hop that pulled the crowd in closer. Snare hits paired with a hollow mallet instrument, layered atop heavy dub wobbles caught my attention. I left the floor periodically to explore the grand staircase and winged-cat gargoyles only to return to a fire remix of Kendrick Lamar’s “Swimming Pools” or Toto’s “Africa.”

By ten o’clock, the raised wooden dance floor was covered with folks awaiting Mr. Shadow. A mélange of nearly-over-the-hill relaxed professional types hip to the artist’s repertoire and twenty-somethings who were smart enough not to miss a chance to learn a thing or two observing a legend on the decks. Those with glow sticks and rage gear were in the minority. I looked out across the venue as black and grey hoodies beneath leather jackets merged into one another. Knees moved restlessly and chins were raised as an air of tension spread through the crowd, who was eager for the uncertainty that is a DJ Shadow set. As the room buzzed with between-set chatter, my photographer Kenny Johnson (AKA the brown belt) and I centered ourselves in front of the unmanned Pioneer CDJ’s lit up atop a table covered in black cloth on the dark stage. I was happy about the minimal amount of stage production, just Shadow and his gear right in front of us. Shoulder to shoulder, we joined the crowd in chanting “Shadow! Shadow!” in anxious encouragement. I was distracted fidgeting with the exposure on my Nexus’ camera, but as the congregation began to roar, I knew the man had finally emerged. “1-2, 1-2, 1-2. Mic check, 1-2. Boston, how y’all doing?,”

DJ Shadow said after taking a hard look at his equipment to make sure he was ready to do the damn thing. A fan yells out, “Sunday night!” Shadow straightened his grey SP (São Paulo) edition New Era 59Fifty cap pondering this fact then said, “It is Sunday night, but we’re just gonna forget about that for two hours.” A grin bloomed across my face as I knew then that things were gonna get irie.

“I’ve been coming to Boston for 15 years. I think three years ago was the first time I came to Royale. I met Mr. Lif,” he said with a reflective look in his eyes. “Tonight I’m returning to my roots, sharing music I believe in. Most music I’m playing tonight doesn’t exist on vinyl.” I would have preferred to have seen him turning twelve inches and dropping needles, but alas, everybody’s got to make do with what resources they have available at the time. “Beats driven music, all styles. You’re gonna hear all that tonight. You’re not gonna hear a lot of hits,” he said with confidence, “I’m not like what I call glory-days DJ’s, like a lot of hits from the past, back to back. I don’t do that. I call that winning DJ. So basically most of this music is either not out yet or just came out in the last couple months. And of course there will be some of my stuff mixed in. But you do have to know my music. Lots of times people are like ‘How come you didn’t play any of your own music? I’m like ‘I played ten of my own songs, you just don’t know my shit.’” Personally, I only know a handful of his studio work and have mostly been grooving to his new Best Of compilation, Reconstructed. So, I was eager to see if I could recognize any of his own material throughout his set.

Up to that point, the crowd had remained mostly reserved but I could feel everyone on the floor shaking off the rust. “This is not a spectator show,” Shadow said, “Ideally, like the last few nights, people have been moving their ass off. Like I said, it’s not Sunday. Man, you are incorrect, it’s Friday night. I’m gonna do as much as y’all want me to do, so I read the audience. It’s up to you how long I’m up here. I would never take advantage of your respect and your support for me. If I’m not enjoying what I’m doing, that’s not going to radiate from me.” With that, he ended his artist soliloquy and set down the microphone. Shadow had issued a call to arms for the crowd to get moving and keep it moving.

“Just so you know, we start off slow and build up. All bases covered, that’s what I call this shit,” he explains before opening with some distorted circus tent beat. Crossing his arms, Shadow does some surgery on it with the left hand on the mixer and the right on the left CDJ. Then he dropped a Gucci Mane cut and some exclusive Bun B joint and I was hit with flashbacks of growing up in North Texas. The sound of a custom system positioned in the back of a Ford Lightning blasting off Southern Rap. Amid the rukus, Shadow picked up two drumsticks and began furiously working his Yamaha drum pad. It was refreshing to watch a DJ with 29 years of touring under his baseball cap continue to push his performance to that next level for his fans. I only stopped moving my extremities to stand and observe him drumming or flicking the wheel to scratch up a track.

As an honorary resident of Springfield, I was pleased to hear a breaks remix of the Simpson’s theme music. “I’m gonna begin to pick up the tempo now. Only the sickest beats, all styles,” he announced to the crowd, as if we weren’t ready for anything at that point. Communal dancing had broken out all over the venue and everyone was too stoked on the quality of beats pumping into our cochleas to hold anything back. He bumped the hyphy godfather, Andre Nickatina’s “Cadillac Girl,” just to remind us that it’s “a Caddy not a Cadillac.” “This is Bay music, it’s the anthem,” Shadow explained to any East Coast homebodies who may only listen to music this side of the Great Divide. After an ill drum pad instrumental, he quickly wiped his brow. Instantaneously, I noticed the start of “Organ Donor,” off his debut solo album Endtroducing….., considered by Rolling Stone, Spin, Pitchfork, and Q magazines as one of the top albums of the 1990’s.

“Thank you for letting me do something different,” he said, “I haven’t done this in the U.S. since the mid 90’s. Music is pretty good right now, just dig through the net.” He then alluded to how he had been showing us some music produced by his favorite underground artists. Throughout the set, he hit us off right with a balance of Reggae Dub, Drum n’ Bass, Trap, Glitch Hop, and House. Even the Trap sounding tracks he played were polished, or at least not as obnoxious as that music can be. I particularly dug the pitched up Waka Flocka Flame remix. Fleetwood Mac’s “The Chain” mashed up with Bone Thugs-N-Harmony was definitely a highlight and crowd favorite, as cheers were raised while we listened to the wind blow. “Every song I play is an endorsement,” he said. I admired his “Sound Provider” t-shirt by So-Cal’s Acrylick clothing line; thinking how fitting it is for him and how much I would like one for myself.

“We turned it into Friday in here. This is me facing forward, if I stay still I’m just dying inside. I’m nothing without your support.” As he readies his final selection of the night, I hear someone yell out “Play some Drum n’ Bass!” It was as if that person was speaking directly from my own heart. He finished the set off with Noisia’s fresh release, “Could It Be,” which allowed me to display my blaze footwork one last time.

Satisfied and musically enlightened, much of the crowd lingered at the back of the venue to discuss what they liked best about the multifaceted set. I took a minute to check out the DJ Shadow live recordings they were selling at the merch booth. NYC 96, XFM 2002 mix, Quannum Crew XFM mix. I wondered if Royale 2012 would be pressed and set out at one of his shows in the future. With DJ Shadow bringing himself and his music down to eye level for Boston tonight, I wouldn’t doubt it. 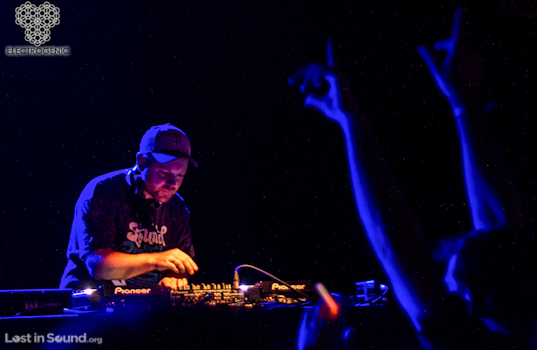 Broadway Studios is in what I know of as the seedy portion of North Beach,…