I just woke up on the south side of Golden Gate Park, the ache of another night’s couch rest pulling at my upper body. Usually, 8 o’clock is hours away from when I will give up the lucid dream and enter the tumultuous dream that is my extended California vacation. Today, however, while scrolling my Facebook wall, I spotted a sponsored ad featuring eleven different bodies with eleven different colored Disclosure faces. My biological clock knows that on the Spotify app it is New Music Friday, and I know exactly where to go for this spontaneous listening party. I forgo the usual almond milk latte and decide to roll with the auditory jump start. After strapping on my efficient Apple

earbuds, I grab the nearest laptop and go all in with Caracal. 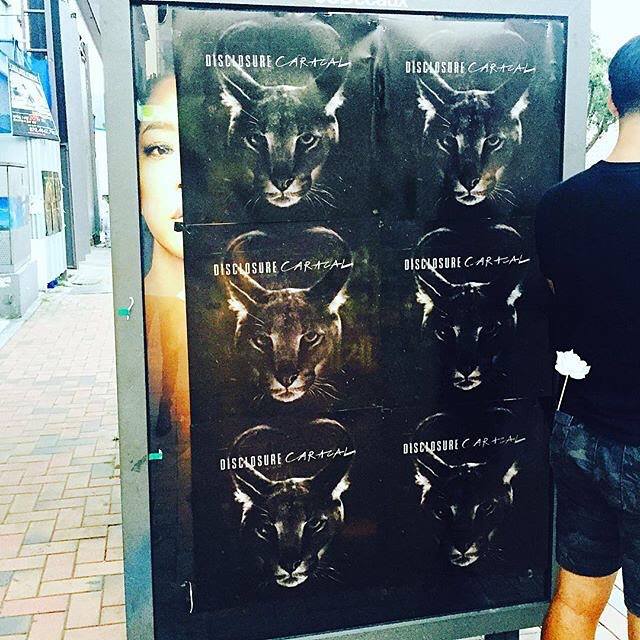 Disclosure could have dropped a sophomore album months ago. In fact, I was concerned that the rush to capitalize on that original global success would have caused Guy and Howard Lawrence to produce a carbon copy of 2013’s Settle. There is undeniably a return to form, in that the album is infectious as Ebola and as emotionally poignant as a Fleetwood Mac

. The relevant production stirs me, as the lyricism continues to be written as an answer to the trials and tribulations of a thoughtful and torn generation. Responsible for the popular proliferation of deep house, Disclosure remains one of the only electronic acts that I can stomach hearing on the radio. I know, you hate the radio, but at least it will be saturated with one of these songs for the foreseeable future.

For dramatic effect, I will hit you with a roll call of the vocalist collaborators featured this time around: The Weeknd, Sam Smith, Gregory Porter, LION BABE, Kwabs, Lorde, Miguel, Nao and Jordan Rakei. Like every other Disclosure release, Caracal acts as a cheat sheet for the listener to answer the question, “Who is singing with true soul these days?” Disclosure in the studio has become a collaborative effort, as the duo wrote every song with at least one other master songwriter. The unsung hero of Caracal has to be Jimmy Napes. The grammy award winning

co-producer of “Latch” has his hands in every track on this release, and it begs the question, “Will Disclosure become a trio?” He has the style, the looks and the voice.

If the first tune didn’t have The Weeknd on it, I may still be in bed. A pulsing, hypnotic track drags me through six minutes of relatable perfection. “Always restless, story of my life,” he confesses, “Disconnected, body clock’s not right. Try to tell myself that, I’mma get some sleep tonight.” After the revelation that is the sexual-heavy new album from The Weeknd, it is actually refreshing to hear him sing such a tame song. He embodies the caracal, the nocturnal big cat that the album is named after. My favorite living artists together on one song, makes me realize that a musical revival is in full effect. Pop music has experienced the change we have been waiting for.

Both bouncy and sorrowful, the Sam Smith collaboration “Omen” is a testament to the confusion of a misplaced love. I had never heard of Gregory Porter, but his presence on “Holding On” may be the stand out performance of the album. With a rapid tempo and echoing vocals, the tune itself is the answer to “When a Fire Starts to Burn”. NYC neo-soul duo LION BABE, another fresh face for me, compliments the spinning reverb and four on da bass of “Hourglass.” Kwabs is the Ghana-born British voice on the half-time Shakespearean love ballad “Willing & Able.” Being very new to the industry, he may be the artist most likely to blow the fuck up this year off of this release.

On “Magnets,” Lorde provides some surrealist sex appeal, oddly enough. “Cus I felt melting magnets baby, the second I saw you through half shut eyes.” It’s a polyamorous ballad about going for it and perhaps even recklessness.  “We’ve had a record summer, can’t turn it down. Now I don’t want to see the end begin .” The mid-tempo beats and Lorde’s syrupy voice make for a little too sleepy of a vibe for me to return too often. The production on “Jaded” is banging and the message is real in the music & arts world, “Golden years left you behind. You cannot replace them, face it or you’ll waste them.” Howard’s voice is developing swimmingly and dripping swag, and I am ready for an all Disclosure-only album next.

Riding high off his stellar new album, Miguel was a surprise to see on a Disclosure album. Sultry and naughty is this guy’s M.O. However, I’m not too impressed by the production or the lack of sexuality on this track. Miguel is not made for deep house. “Superego” reminds me of a 90s pop tune that I used to roller blade to at the skating rink, sorta Gwen Stefani-esque.

“Echoes” reminds me a whole lot of “January” from the first album. Again, I find myself wondering who this dope vocalist is and am stoked to find that it is Howard. “I’ve had, I’ve had enough. Trying to find the space to interrupt. I’ve had, I’ve had enough. All the different ways you hold me up.” I feel that sentiment boys. Such a banger. The album concludes with “Masterpiece,” a rainy-evening future bass track made for a Soulection audience.

Living as a digital vagabond in the Bay Area after Burning Man and Symbiosis, the struggle is real. While I transition my entire existence (i.e. physical homebase, career path, relationship status, etc.) I need these songs in my head. It’s funny because I said the exact same thing when Settle dropped. I will be out here traversing the Pacific coast with these grooves sustaining me, at least in part.

Where can you find fossilized tyrannosaurus rex, a $75,000 chunk of Tourmaline, an abundance of…