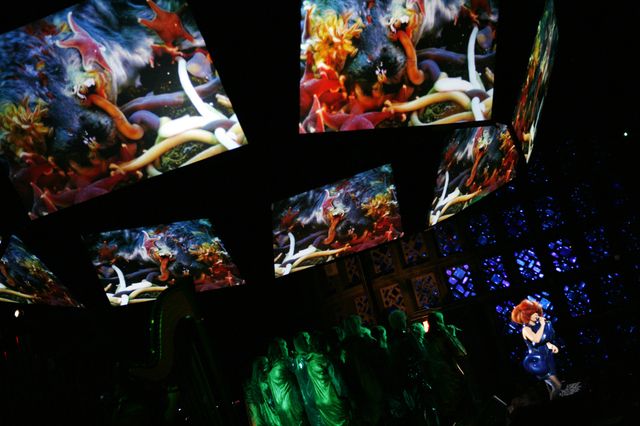 Imagine a place where music, nature, and technology collide. During the weekend of February 18th, this became my reality at the Queens Hall of Science. Björk‘s New York residency was set up to unveil her Biophilia album for United States fans in this intricate wonderland. The album sheds light into interpersonal situations through the processes of living organisms. At the New York Hall of Science, a venue unlike any other, there were exhibits to compliment the songs for her album, which she based off rhythms and sounds found in nature. Topics spanned from the tiniest microbe to the most gigantic processes in the universe.

The museum grew crowded rather quickly, and a line emerged upon our entrance. The feeling of anticipation to see this legendary musical act made the air dense. Once we were granted entrance to the stage area, the intimate crowd

surrounded a mandala of musical instruments. Accompanying the more standard instruments were some that she had created. One instrument that she used was the Tesla Coil, which is typically used to produce lightning-like voltage patterns, specifically for the song “Thunderbolt.” A border of television monitors circled the stage, reflecting abstract visualizers that sporadically showed the unique visual representations Björk uses to notate her musical pieces.
The lights dimmed as Björk and her chorus of women gracefully took to the stage. An introduction narrarated by David Attenborough explained Björk’s intentions for the album to meld sound with science. Björk looked larger than life, surrounded by a wall of musicians in her skin-tight oceanic blue balloon dress and vibrant orange afro. Her signature vocal style added a layer to the already complex instrumental and rhythmic patterns. This produced music that was absolutely mind-bending. Though her performance specifically focused on her newest album, she did play some older songs such as “Hidden Place” from the album Vespertine, which, with its enticing jungle ambiance, has always been a favorite of mine. As the show came to an end, Bjork left for a brief intermission before her encore.  She ended with “Declare Independence” as the crowd chanted her off stage.

She left the entire venue filled to the brim with awed expressions. This show was an intricate performance that incorporated the many perspectives through which her newest album can be absorbed. You can catch the rest of the Biophilia New York Residency at Roseland Ballroom on February 25th & 28th and March 2nd & 5th.