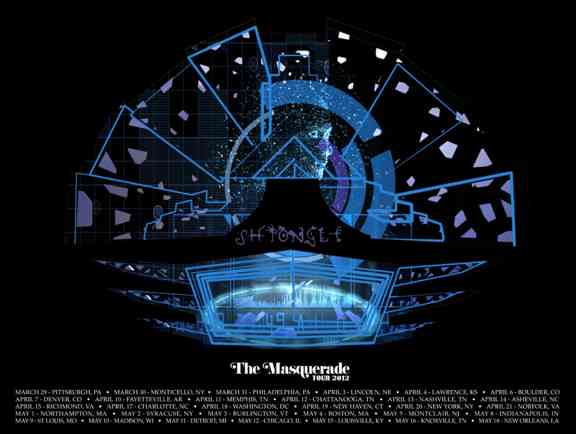 420. Arguably the biggest unofficial holiday of the year. I’ve always loved it for the obvious reason, and because it happens to fall less than a week before the second biggest unofficial holiday of the year: my birthday. This year, I was lucky enough to celebrate the Ganja goddess and my 23rd turn around the sun with my absolute favorite music in the whole wide world- the indomitable Shpongle, serendipitously accompanied by the band I have been working with, EOTO, one of my most beloved West Coast producers, Phutureprimitive, and the incredibly sexy & talented psychedelic violinist, Hannah Thiem. The Brain Trust threw an afterparty with two of my other favorite producers on the planet, Random Rab and Bluetech. To say this roster of artists- Shpongle, EOTO, Phutureprimitive, Hannah Thiem, Random Rab and Bluetech – have been some of the most influential and most-listened to in my life is no stretch of the imagination. It was like my secret dream night come true.

Almost all of the Lost in Sound crew was in attendance at one or both of the shows (minus the much-missed and soon-to-be back Sir Ranchsauce), creating the feeling of a big ol’ family reunion. So much love filled up the venues that evening, I thought we might float away. Upon strolling into Roseland Ballroom, I was reminded that the crowd Shpongle draws is a large part of why I am so devoted to this band. The place was full of gorgeous creatures; epic specimens, shining and smiling in full on regalia. Elaborate costumes, in all colors as bright as can be, were rocked by a sea of delightful light beings bursting with anticipation for blast off. I noticed that this crowd was particularly young. Extremely young. Like, high school young, for the most part. Although this might be a source of dismay to some, to me it signifies continuity and growth for the magical unifying force that is Shpongle. I welcome you, young ones; just please remember to Use Your Head, and truly listen to the music. It’s actually more powerful than the drugs, I promise. Phutureprimitive went on to an already roaring crowd, warmed up by the hauntingly beautiful, emotional ocean of love that pours out of Hannah Thiem’s violin. Rain (Phutureprimitive) was decked out in his signature outfit, looking sexy as ever, sounding sexy as ever, dancing up a storm- at one point coming out from behind the machines just to break it down, rockin’ out for the crowd. They loved it, responding with a flurry of elevated dance moves in return. Last weekend, somebody told me Phutureprimitive’s music sounds like it should be in a futuristic sci-fi zombie-killing video game. I agree. I also think it should be the soundtrack to my honeymoon, and blasted into space in hopes of attracting extraterrestrials for an intergalactic dance-off. I think they’d really dig it. He seamlessly blends dubstep with intelligent, complex layers of trippy, emotive, low, round, bouncy, booming, warm, sexy love drops. Dancing to his music feels like you are submerged in a deep pool of ancient mineral hot springs bubbling up from the center of the earth, getting massaged by a goddess while your limbs flow uncontrollably with the waves. Yuuuummmmmmm.

Then EOTO came on, mounting their hell of a setup, perched inside a giant 3D projection mapped lotus flower built by my good friend Zebbler and his Boston-based crew. Zebbler was providing the visuals, thank god, because he kills it every time. Robots floating in space, journeying through a never ending galaxy of stars, kaleidoscope eyeballs and so much more that is beyond description. I am the biggest Zebbler fan in the world; initially because of his status as a radical renegade artiste, who got the entire city of Boston shut down in 2007 by guerrilla marketing for Aqua Teen Hunger Force, following his arrest with a brilliant press conference broadcasted live on CSPAN, Fox and NBC, in which he would only answer reporters’ questions with hilarious statements about haircuts (“I think my dreads are perfect”… “I’m sorry, sir, that’s not a haircut question”).

His visuals were a perfect match for the incredible driving force that is EOTO’s totally improvised live show. With brilliant sampling, some of the deepest, dirtiest bass I have ever been blessed to vibrate with, quick-as-lightning hand percussion by Jason Hann and Michael Travis on guitar (both of the epoch band The String Cheese Incident), their fusion of live instrumentation with electronic ingenuity is consistently fresh, hot, and ALWAYS a rollicking good time. They are two of the most loved and highly respected musicians in the scene, and we are lucky that such big figures in the jam band world have taken an interest in fusing their natural talent for live instrumentation with cutting edge technology. We are also lucky that their tour never ends, and even though they are one of the most visible acts, present at many a festival and probably hitting your hometown every 2-3 months, their music is always new, always improvised; with never a dull moment or boring repeat. This was my first time seeing them with the 3D projection mapped lotus flower, and I couldn’t take my eyes away, even for a second.

Once they finished up to massive applause, a boy in the crowd turned to me and said “This is my first time seeing Shpongle.” I threw my arms around him in delight, and told him he had no idea what he was in for. We smoked a celebratory bowl before I ducked backstage to congratulate Jason & Travis and say hi to Simon before the show. He told me he was about to play four new songs (the best birthday present ever), one titled “Museums of Consciousness,” which I thought was a real winner. He had new feathers in his famous hat; bigger, longer, and brighter red than ever before, which he said were created by his goddess of a girlfriend, Serena. He went on stage and I decided to find the best view possible, as this would be my first time witnessing the new Shpongletron (with visuals provided by a new VJ, Xen). I flew upstairs to the backstage balcony overlooking the crowd, with a perfect view of the show and only about 10 other people around. Those people turned out to be the most fabulous co-creators of this experience I ever could have hoped for. A girl wrapped up in a leopard skin dress, dancing wildly with a gorgeous African American man in a blond Ken doll wig and rockstar shades. Matty, the man who designed the floral arrangements on stage. Jason Hann and the fabulous Livi Yeatman. Rain Phutureprimitive and Hannah Thiem. And we danced, danced, danced, grooving and moving together as one, flabbergasted by the brilliance of the pyramid-like structure (which, in its former life, was the main stage at Earthdance). It was given new life by the 3D projection mapped visuals of Xen – some of the most intelligent, perfectly coordinated, what-the-hell-where-the-f#$k-did-that-come-from imagery I have ever seen. I could hardly speak or even dance at first, helplessly hypnotized by the caliber of his projections. They went on a wild ride through space and time, where it all falls apart and comes back together again, piece by piece, then all at once disintegrating, just to build back up with something new. The beginning of the set was, in the words of the florist, “much more Hallucinogen than Shpongle.” Meaning heavy on the psytrance. But that was fine by me, and the set soon progressed into the familiar sounds of “Divine Moments of Truth.” The new songs he played were instantly stimulating in their fresh, unique feel, making me even more excited for the forthcoming fifth album (if that was even possible).

I lost myself in the music to such a degree that my body broke down moves I didn’t even know I had. I went completely wild, generating a tornado of energy that I swear must have messed with the weather patterns. As the set came to a close, I skipped downstairs to the dressing rooms, laughing with Rain and the lovely Lisa Li, congregating with the crew to congratulate everyone on a job very well done. We decompressed for a while, as I picked Simon’s brain about Shpongle 5 and when the next live band show will be (unclear, due to the not-so-hot physical state of Raja Ram, Simon’s partner in crime, space, & time. Everybody close your eyes, clap your hands, sing “I do believe in Shpongle, I do, I do” and beam your best wishes for him to get better).

Realizing I was about to miss the afterparty, I flew out into the night and arrived right when the show was ending – but just in time to catch up with Random Rab. I was sad to have missed his set, but lucky that I had just seen him the weekend before at Lucidity Festival. He is one of the most articulate, intelligent, highly connected and grounded beings I have ever encountered, and this made for the best conversation of the evening. I award him Most Magnetic of Them All. He headed back to the hotel to rest up for his next show in Baltimore, and I jumped in a cab with the LiS crew to rage the after-after-party, featuring a DJ set by Jason Hann. Hosted at my good friend Shlomo’s house by the omnipotent Mr. Bugsly Presents, this gathering was a real testament to just how much the scene has grown since I left the East Coast 8 months ago. I could not believe it – so many people packed into that space, so many new faces, so many young girls, so much fresh life and eager beavers ready to rage. I ran into the boy who had just seen his first Shpongle show, and he was totally blissed out, world rocked, blown away.

I was just thrilled to connect with so many friends, old and new, and revel in the pleasure of our shared experience. Because that’s what keeps me coming back to every Shpongle show I can possibly attend – the pure, upmost feeling of UNITY, bonding us through love on a trip to the place where we feel as connected as “jellyfish making love at 10,000 fathoms deep,” in the words of Raja Ram. That place is Shpongleland.

Brewed in the sludgy depths of the New York City sewer system, HeadZ Will Roll…