I have made it out to see The Egg play live in the U.S. a number of times. I was introduced to the band when I saw them for the first time during their unforgettable late night set at Camp Bisco 7, and made it a point to attend their show at the Middle East in Boston last fall. I went to the Boston show with my roommate Dizzy-unsure of what to expect from the band on a smaller stage. My head was screwed on a little straighter for this show(compared to the last night of Camp Bisco)and I had the chance to really take in the show’s visual aspects(intriguing video clips projected on a screen).

This year, Drew Thane has stepped in as a consistent replacement for Matt White on guitar and continues to play with the group today. The Wakarusa set in June was my first chance to see Drew play and to get to know the band-before and after their set. The Waka set was very high energy and consisted of a set list that I found to be very safe. As for their opening set for Conspirator at the TLA in Philadelphia back in late June-The Egg showed incredible stage prowess. But-again-the song choice and order seemed to be nothing too fresh.

At Trinumeral Music and Arts Festival 9 in Asheville, things were very different regarding The Egg’s live set. They seemed to be trying out a new stage setup-a design in which Drew and Ned were stationed to the far left side of the stage and Maff and Ben were positioned on the far right. The resulting open space between the two sets of musicians made the setup noticeably more effective. The background visuals were easier to view, as they were no longer a part of a full stage spread. Additionally, during the Trinumeral set, a mesmerizing light-up hoola hoop dancer performed an in-sync routine within the stage space left open from the new setup. With fire dancers to one side of the space in front of the stage, and live painters to the other, I felt like the visual arts additions added a powerful vibe to the show. 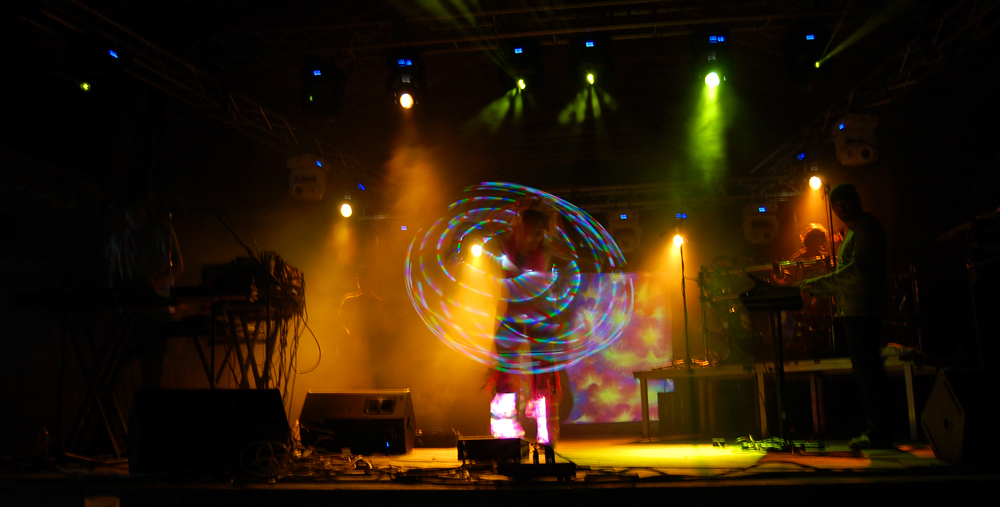 There was something else about this set though, something I hadn’t noticed from their live show in the past. Prior to the set, I recall asking Ben if they would be playing “She’s Terrific”. He hesitated for a moment and replied by saying, “Yes, I’m sure we can do that for you.” I was excited to know that the song would be a part of their set list for Trinumeral. However, instead of coming out and playing a set, calculated grouping of songs played one after the other, The Egg jammed.

They did not transition directly from one song to another, instead they jammed out improv on some of their most popular tracks. “Tocadisco” was manipulated in a way I had never heard at past shows by bridging into “Always There.” This style of play sounded like a new way of doing things for The Egg, and there it was clear that it was not as easy of a set for them to play as others this summer. In the end, however, I felt like I had heard and seen something totally new from the band-as if I was a North Carolina native hearing “Say You Will” for the first time.

“If it was up to me, I would always jam/improvise during the gigs,” said Ben Cullum, The Egg’s brilliant bassist/Mooger, who has been with the band for nearly 6 years.

Although the Egg has found immense popularity worldwide without a heavy jam element infused into their live performances, they are now experiencing a popularity amongst an ever-changing Jamtronica community. I think that there exists an untapped direction in which the Egg would do well to explore-that of the live improvisational performance. The result could include growth amongst the member’s of the band, a more diverse fan base, and above all-the possibility for revolutionary music to appear as a direct effect of a particular live performance.

The Egg kicks off their US Fall Tour on October 21st on the road with Lotus-spending this Halloween at the Baltimore’s Sonar Lounge and rounding out their leg of the tour with two nights at The Paradise in Boston in early November. “You can look forward to a tight hour’s worth of spacey live dance vibes with a good bit of improvisation thrown in,” Cullum said regarding this tour’s live performances.

The Headtron conglomerate stationed in Los Angeles, California is on the forefront of sound, making…